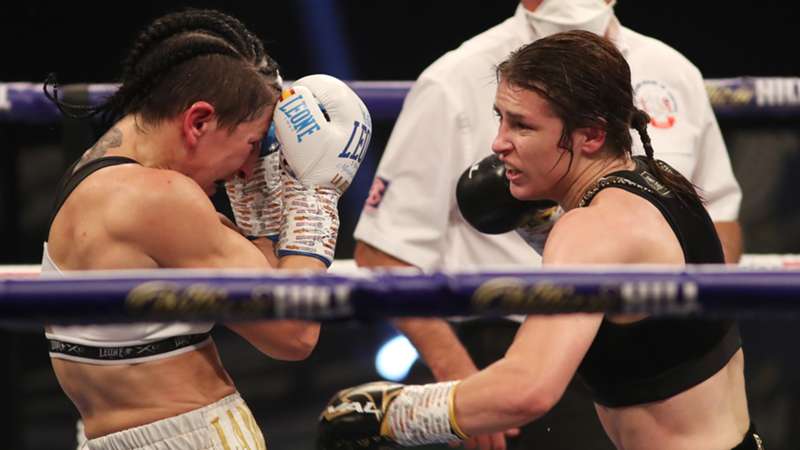 It was one-way traffic for Katie Taylor on Saturday night in London.

There are levels to boxing and Katie Taylor simply drowned Miriam Gutierrez out with her world-class skills Saturday night.

The undisputed world lightweight champion defended her crown, turning her titles' defense into nothing more than a glorified sparring session with her unanimous decision demolition of Gutierrez. Judges at The SSE Arena Wembley in London had it 100-89, 100-90 and 99-91 all in favor of Taylor, who improved to 17-0. DAZN News had it 100-89 for Taylor.

From the opening bell, Taylor used ferocious flurries of punches to blast Gutierrez with shots. The pressure led to Taylor dropping her outclassed mandatory challenger at the fourth round bell with a sharp left hook to the jaw.

Gutierrez survived the round and the fight, but not without the Irish boxing sensation pouring on the punishment in an attempt to get a stoppage. She pummeled Gutierrez with body shots and thudding punches across the jaw all fight long, but Gutierrez made it to the final bell.

"I was definitely trying to get her out of there at times," Taylor said as the only gripe of her performance.

"I think there's no fight she wouldn't take," said Hearn.

Taylor listened to her promoter carefully and agreed.

"There's no shortage of big fights out there," the undisputed lightweight champ added moments later. "It's all about legacy. I want to keep making history in this sport."

facebook twitter whatsapp
Here's the 10th and final round, as both fighters touch gloves in a sign of respect. Taylor opens the round by wrapping a right hook around Gutierrez' guard and she's keeping the pressure going strong. Flurry after flurry. The final bell tolls, as Gutierrez has got to be glad that it's over. (10-9 Taylor, 100-89 Taylor)

facebook twitter whatsapp
Taylor keeps firing heavy artillery. She wants the stoppage. The champ is walking through any offense Gutierrez is trying to mount and blasting her. Gutierrez hits the champ with a nice body shot in what very well could have been her best punch of the bout. The challenger has clearly been outclassed, but she has no shortage of guts. (10-9 Taylor, 90-80 Taylor)

facebook twitter whatsapp
Taylor has Gutierrez pressed up against the ropes and is just punishing the challenger with offense. Gutierrez tells Taylor to bring it on and the champ happily obliges, peppering her with more stinging punches. (10-9 Taylor, 80-71 Taylor)

facebook twitter whatsapp
Taylor with more furious flurries, before banging the body with punishing shots. Oh my. These are thudding blows from the champ. Gutierrez just can't land a shot this round. Just as that's said, she lands a left, but only for Taylor to walk through it and pepper her with another barrage. (10-9 Taylor, 70-62 Taylor)

Taylor absolutely pouring it on. She's taking heed from her corner's advice of trying to get the challenger out of there this round.

The ref is taking a closer look, but Gutierrez manages to fight back. Taylor goes back to picking her clean punches while making the challenger miss on shots to add insult. (10-9 Taylor, 60-53 Taylor)

facebook twitter whatsapp
Gutierrez is immediately in trouble, as Taylor picks up where she left off and is pummeling the challenger with shots — both to the face and body. Gutierrez proudly stings the champ with a right hand that sneaks through and a jab moments later. But Taylor goes right back on the offense with stiff shots. Taylor rocks Gutierrez with a left hook square on the jaw. Oof ... the challenger is taking a beating. (10-9 Taylor, 50-44 Taylor)

facebook twitter whatsapp
Taylor blasts Gutierrez across the jaw with a right and then adds a lightning-quick flurry of punches to follow. This is demoralizing for Gutierrez, who is in the same ring as Taylor, but hasn't shown that she's in the same league. There are levels to boxing, as Taylor is top tier. Another flurry of punches from the champ pummels Gutierrez. Whoa! Taylor drops Gutierrez right at the bell with a lunging left! Gutierrez gets up and beats the count, but took plenty of punishment this round. (10-8 Taylor, 40-35 Taylor)

facebook twitter whatsapp
Taylor is pounding away at Gutierrez against the ropes. Gutierrez is in big trouble! She's getting tagged left and right with heavy-handed, quick shots. The champ is pouring it on. Gutierrez clinches and seemingly survives the onslaught, but Taylor is back to tagging her with stinging shots. Gutierrez valiantly presses forward, but she's eating more shots while doing so. Has she weathered this storm from Taylor? (10-9 Taylor, 30-27 Taylor)

facebook twitter whatsapp
Taylor walking Gutierrez down and ripping shots at her upstairs and to the body. Gutierrez' face is red already. (10-9 Taylor, 20-18)

facebook twitter whatsapp
Taylor banging away at Gutierrez. All fire being thrown by the champ. It's one-way traffic and Taylor is pouring it on with flurries. Now, she's pounding the challenger's body as well. Oof! (10-9 Taylor)

The champ looks ready to defend her undisputed lightweight titles.

Katie Taylor vs. Miriam Gutierrez for Taylor's undisputed lightweight crown is next

facebook twitter whatsapp
The main event of this women's triple-header is next! Gutierrez is 13-0, but has never fought outside of Spain. Doing so against a world-class fighter like Taylor is a tough task.

Harper rips an uppercut, before the two clash heads with an accidental headbutt. Harper blasts Thanderz with a body shot and the challenger is hurt. She winces in pain, as her elbows try to valiantly protect those ribs. Blood dripping from Thanderz' nose, too. Harper is pouring it on and the ref has seen enough. He steps in and stops the punishment, as Harper successfully defends her WBC super featherweight title.

Harper really put on a clinic in this fight.

facebook twitter whatsapp
Thanderz comes out and lands a couple of shots. Now, Harper digs into the challenger's body with a straight right. She goes back to the body with a sweeping left hook. And again. Harper also adds a left hook upstairs. Thanderz looks thoroughly frustrated and for good reason. Now, a double jab from the champ. She's just jabbing Thanderz' face repeatedly. (10-9 Harper, 80-72 Harper)

facebook twitter whatsapp
Harper opens with an overhand right. Thanderz has got to show more urgency or this one is going to end in a shutout. Harper steps into her jab and makes it a quick combination to brush Thanderz back. At times, Thanderz is able to land body shots, but Harper steps back and pumps that jab. A better last couple of rounds for Thanderz, but probably not enough to take the frames. (10-9 Harper, 70-63 Harper)

facebook twitter whatsapp
Thanderz grazes Harper with a body shot and another, but the champ is back on the move, as she floats to the outside and fires back with that jab. Harper's jab has more than kept Thanderz at bay this fight. It's also enabled Harper to open up with more offense. (10-9 Harper, 60-54 Harper)

Thanderz comes out throwing a big right hook, which misses, and Harper makes her pay with a counter left hook. Thanderz lands two rights, but the champ with precise punching. Harper lands a right and opens up with an uppercut followed by a left. Harper is also stifling Thanderz with her movement. Harper is in full control.

facebook twitter whatsapp
Thanderz picking up the pace, showing urgency and a willingness to pressure. Let's see how the champ responds. Well, with the jab, of course. It has been Harper's bread and butter. Harper with a stiff right hand and she follows that with body shots. Now, Harper wraps a short left hook around Thanderz' guard. They briefly exchange fire in the center of the ring. Thanderz is doing her best to dig in, but Harper is keeping her distance behind that jab. (10-9 Harper, 40-36 Harper)

facebook twitter whatsapp
Harper continues to split Thanderz' guard with timed, crisp shots. Thanderz with a bit of body work to counter, but the champ reverts to precise punching as her answer. Thanderz is trying to load up and land heavy shots, but Harper is in control. (10-9 Harper, 30-27 Harper)

facebook twitter whatsapp
Thanderz catches Harper with a left hook, but the champ is right back to pumping the jab from the outside. Thanderz' face is already red from the stinging shots she's eating. Straight right lands flush for the champ with about 45 seconds left in the round. Left lands moments later. Thanderz rallies with a flurry that seemingly wobbles Harper a bit. But the champ takes the round. (10-9 Harper, 20-18 Harper)