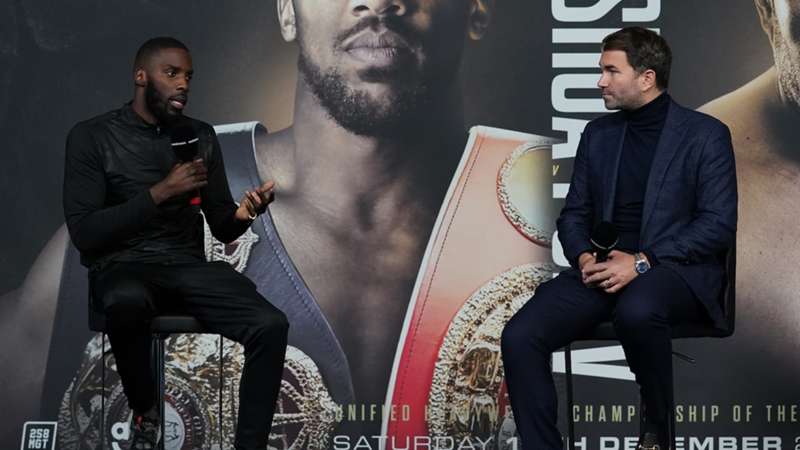 Lawrence Okolie was set to fight for the vacant WBO cruiserweight title on the Anthony Joshua vs. Kubrat Pulev undercard before Krzysztof Glowacki tested positive for COVID-19.

With just a week and change until the biggest night of his career so far, Rio 2016 Olympian Lawrence Okolie (14-0, 11 KOs) watched his first challenge for a world championship disappear as he opened his phone to see a message from Matchroom Boxing promoter Eddie Hearn that read: "[Krzysztof] Glowacki has coronavirus."

Hearn announced when making the news public that Okolie would remain the chief support to Anthony Joshua vs. Kubrat Pulev on Dec. 12 at the SSE Arena, Wembley. But because of Glowacki's history surrounding the belt that would have been up for grabs — the Polish fighter's team successfully appealed against his controversial World Boxing Super Series loss to Mairis Briedis — the WBO will wait for him to be ready to be part of the fight that decides the next titleholder.

That leaves Okolie instead taking on Glowacki's compatriot, the undefeated Nikodem Jezewski (19-0, 9 KOs). And Okolie explained at the face-to-face press conference two days before their showdown that his rise to almost fighting for world honours came so fast that he has no problems fighting someone else first.

"For me the most important thing is fighting," he admitted. "The title and all that stuff will come with time. I thought my time was coming Saturday but I will keep focused and make sure I get past an unbeaten fighter here.

"I feel like, if anything, it’s a positive. I won the British, Commonwealth and European belts and suddenly the world title shot came. But this now feels like a final eliminator to prove I’m ready."

It will be the 29-year-old Jezewski's first fight outside of Poland since beginning his professional journey with a pair of bouts in Germany in 2013. However, the allure of being in line to compete for that up-for-grabs WBO title against a fellow Pole if he can spoil Okolie's own perfect record was too good to turn down.

"Thank you for giving me the chance," said Jezewski to mediator and fight promoter Eddie Hearn. "Sorry that my English is no good! But this is a big chance for me. It’s a chance that I will take.

"I respect Lawrence because he is an Olympic boxer. Now I’m here, we must go to the ring and fight. I will do everything I can.

"I don’t know if this is a good moment for me to fight or a bad moment, but I took the fight and I will give everything. Glowacki spent 12 weeks preparing for Okolie. I had only five days, and two more days until I go to the ring on Saturday."

Okolie later told press conference hosts Chris Lloyd and Darren Barker after the face-to-face that he predicts both he and Joshua will win Saturday's top two fights in around half of the allotted rounds.

"He’s given me tips of what to look out for," said Okolie with regards to Joshua's advice on dealing with the left-handed replacement. "Every week during Olympic training I was sparring with southpaws anyway.

"I’m gonna win by mid-rounds stoppage. It’s hard to tell how he’s going to fight but I’d rather he came forward. I don’t think he will run.

"I’m not going to rush the first few rounds because I don’t know a lot about him. AJ will do something similar against Pulev. Pulev is still a world-class fighter but Joshua will break him down."

Okolie vs. Jezewski takes place on the undercard of Joshua vs. Pulev, which airs live Dec. 12 on Sky Sports Box Office in the U.K. and Ireland, and elsewhere across the globe with a DAZN subscription.