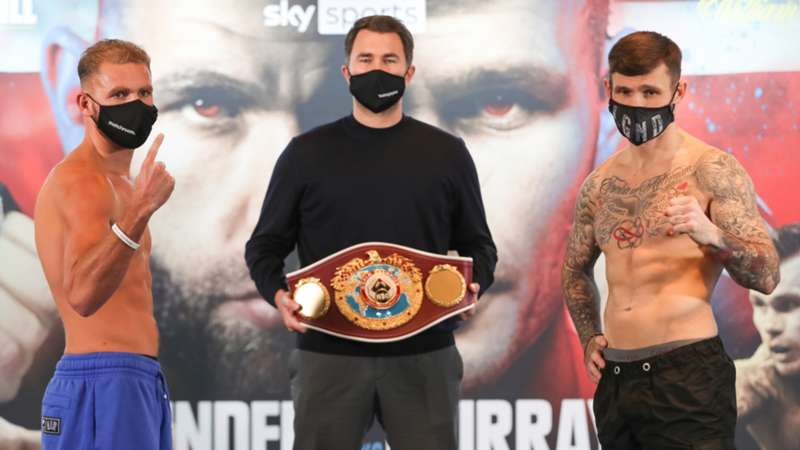 Both WBO super-middleweight champion Billy Joe Saunders and challenger Martin Murray made weight and confirmed their title clash this coming Friday at the SSE Arena, Wembley.

Presenting the weigh-in coverage were Chris Lloyd and former middleweight world champion Darren Barker, who spent most of his career running parallel to compatriot Murray.

Barker admitted during the post-weight staredown between champion and challenger that we may be about to witness the 38-year-old's last professional fight, regardless of the outcome.

"I don’t think he’d still be going today if he had won the belt in one of those other world title fights," said Barker of Murray, who was unlucky to draw with Felix Sturm in 2011 and lose on the cards to Sergio Martinez in 2013, before being stopped by Gennadiy Golovkin and losing out to Arthur Abraham on fine margins in 2015.

"He was so unlucky with some of those challenges, and what a way to go out it would be if he could pull off the win.

"And if he does somehow beat Saunders, I think he’ll retire on the spot.

"He’s got to work from start to finish and go through the gears if he is to pull this off. He’s going to leave absolutely everything in there."

Saunders, unbeaten as a pro and the heavy favourite, had previously commented that he wanted to defend his title against the Saint Helens man, whose lengthy career he greatly respects. However, Saunders is also confident he will retire him once and for all on Dec. 4.

In the chief support bout, James Tennyson and Josh O'Reilly look to muscle in on a thriving lightweight scene in their eliminator for the WBA title.

Tennyson weighed 134.8 lb, heavier than the unbeaten Canadian at 134.3 lb. Both Lloyd and Barker were. confident Welshman Tennyson will come in considerably heavier still on fight night itself.

Elsewhere on the card, Shannon Courtenay (117.9 lb) weighed two pounds heavier than Dorota Norek (115.9 lb) for their bantamweight eight-rounder as Courtenay looks to bounce back from her Fight Camp loss to Rachel Ball, while both Zach Parker (167 lb) and Cesar Nunez (167.7 lb) made weight for their WBO International super-middle battle.

Lerrone Richards (172 lb) vs. Timo Laine (171.6 lb) is on at what will be a catchweight bout over eight rounds as the unbeaten new Matchroom signing Richards looks to begin his new deal in style, and another catchweight just above super-middle pits Lewis Edmondson (171.2 lb) vs. John Telford (170.5 lb) while Donte Dixon (127.6) and Angelo Dragone (127.9) open the show.

You can watch all of the action unfold on Sky Sports in the U.K. or in many other countries around the globe on DAZN.