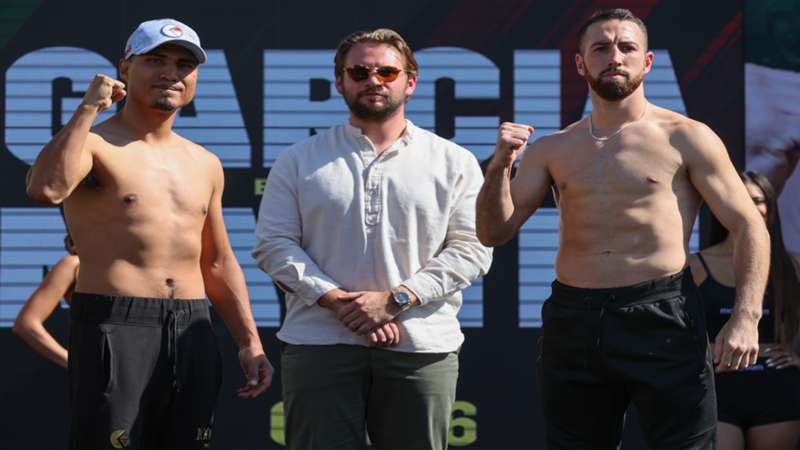 We have a fight.

FRESNO, Calif. — Mikey Garcia and Sandor Martin have had a respectful buildup towards one another heading into Saturday's 145-pound catchweight affair.

That continued at Friday's weigh-in at Chukchansi Park as Garcia and Martin tipped the scales to make the fight official. Martin weighed in first and came in at 144 pounds. Then the former four-division world champion stepped on the scale and weighed 143.6 pounds. They had cordial faceoff before shaking hands and going their separate ways.

Garcia (40-1, 30 KOs) steps back into the ring for the first time since a thrilling February 2020 unanimous decision victory over Jessie Vargas. However, the 33-year-old knows what he's up against as a win puts him in a position for the fights he wants in 2022 against Regis Prograis, Josh Taylor, or Gervonta Davis.

"I’m excited to get back and give my fans a great night of boxing and to show the world there’s much more in Mikey Garcia," Garcia told DAZN's Todd Grisham after the weigh-ins.

"It’s not going to be an easy task. I've seen Sandor Martin, and he’s a very good boxer. But I’m just going to do my job, get the job done, get that 'W' and show my fans that there’s plenty more to give."

Martin (38-2) competes in the United States for the first time in his professional career. He knows Garcia is his most formidable opponent to date and knows what he must do to head back to Spain with the victory.

"I’m very happy and excited for the opportunity that boxing has given me. I’m ready to show I’m on a world level," Martin told Grisham.

"I have to be the better fighter. The more complete fighter in the ring. I also have to have a lot of desire in there to walk away with the victory."