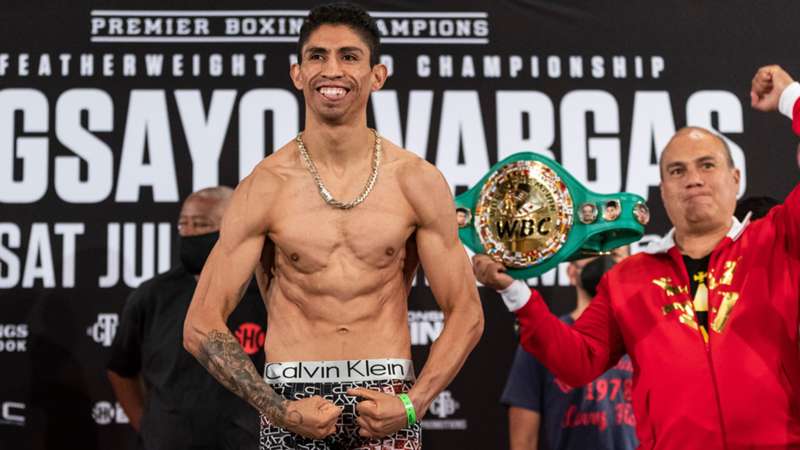 Four years ago, Rey Vargas participated in his last world championship fight before vacating the vacant WBC super bantamweight crown and while it may sound like an eternity, the Mexican is eager to prove he is still at the top of his game.

Tonight at the Alamodome in San Antonio, Texas, he will take on Mark Magsayo in a WBC featherweight championship fight which brings together two undefeated fighters with explosive styles.

"I feel happy, full of energy, it's a big jump, a big point. Where too many positive things can emerge and resurface," Vargas told DAZN.

The strategies will play a huge role in this fight with two legendary boxing trainers in each corner: Ignacio Beristain will be in Vargas' corner; while Magsayo will be under the watchful eyes of the award-winning Freddie Roach.

"The truth is that I'm not too worried about Freddie, I've already won when I've faced one of his fighters. At the end of the day it will just be me and Magsayo in the ring and I'll prove that if he's good I'm great. It's going to be a very interesting fight," Vargas continued.

"This fight has ingredients and hopefully it will be a good fight and hopefully it won't be one, but a trilogy and make a good story. The styles lend themselves, the fighters are tough. You know my drive, my grit and bravery. I get knocked down, I get up, I get bloody and I keep fighting, I don't crack, I don't swim, that's what people like and that extra is in it for the fight."

With an undefeated 35 fight professional record, Vargas inisisted that this record doesn't add any extra pressure ahead of his fights.

"35-0 Of course it weighs, but I prefer to see it as a pride and a responsibility, not everyone arrives with a world title and more defences and now looking for a second division. I look back and see what I did and I say 'how nice, how good, that God allowed me to do that, but there is a responsibility to work harder because you have to continue to maintain that'."