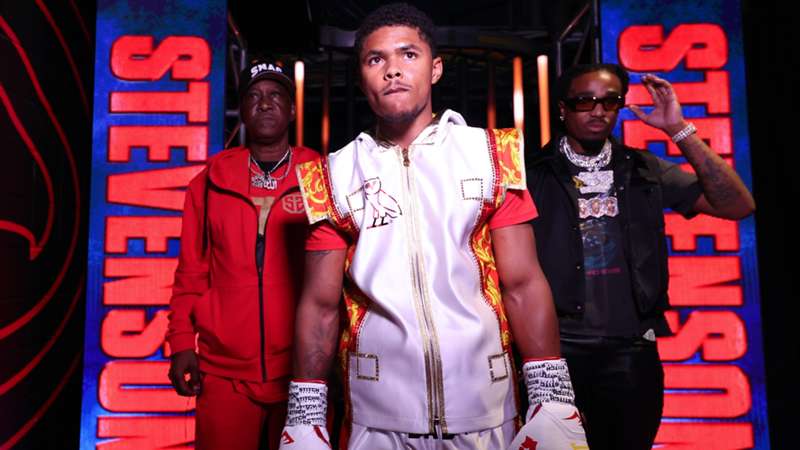 It's a suggestion that has the full support of DAZN EVP Joseph Markowski and Serrano's promoter, Jake Paul.

Shakur Stevenson wants to stagger his fight with Oscar Valdez so boxing fans can watch Katie Taylor vs. Amanda Serrano at the same time.

Stevenson is the current WBO super featherweight champion after beating Jamel Herring in October last year, and the 24-year-old makes his first defence against Valdez on April 30 if everything goes to plan, with Valdez putting his own WBC strap on the line.

Matchroom promoter Eddie Hearn hopes to stage his fight in New York, with Stevenson vs. Valdez expected to take place in Las Vegas, meaning the difference time zones could facilitate an agreement between the two organisers to coordinate the start times of the respective events.

Top Rank head Bob Arum had caused uproar when he suggested his event would dwarf interest in the all-woman fight but after Jake Paul hit out at the boxing veteran, his own fighter Stevenson stepped in to suggest a workaround should be found.

Tbh, I hope they can stagger the times for my unification with Valdez and Serrano vs. Taylor for April 30.

Let the ladies shine too and the fans watch both fights.

“To be honest,” Stevenson wrote on Twitter. “I hope they can stagger the times for my unification with Valdez and Serrano vs. Taylor for April.

“Let the ladies shine too and the fans watch both fights.”

Both Taylor-Serrano co-promoter Jake Paul and DAZN EVP Joseph Markowski approved of the idea, with the latter indicating that their side would do what they could to make it happen.

Thank you Joe and @DAZNBoxing now we just need @espn to do their part. @mikecoppinger @mikerothstein talk to them folks please and let’s all win! https://t.co/s2vPsF6edg

And Paul added: "Thank you Joe and DAZN, now we just need ESPN to do their part.

"Mike Coppinger, Mike Rothstein, talk to them folks please and let's all win!"