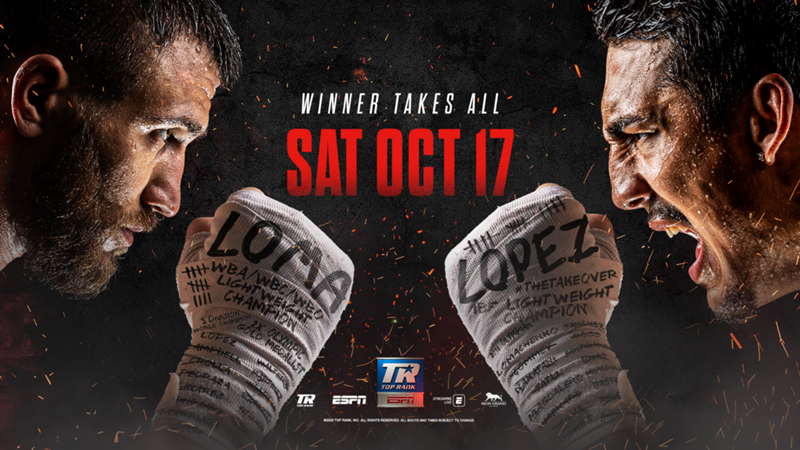 The DAZN News staff makes their picks for the lightweight title unification bout between Vasiliy Lomachenko and Teofimo Lopez Jr.

One of the most anticipated title fights of the year in the ultra-competitive lightweight division will take place on Oct. 17 when IBF champion Teofimo Lopez Jr. (15-0, 12 KOs) will defend his title against WBA (Super), WBO and The Ring champion Vasiliy Lomachenko (14-1, 10 KOs) inside the bubble at the MGM Grand Conference Center in Las Vegas.

It's a classic case of youth vs. experience as Lomachenko comes to the ring as arguably the most decorated amateur in the history of boxing with a 396-1 record and two Olympic gold medals. That success translated seamlessly into the professional ranks as the 32-year-old won his first world title in his third professional bout and has become a unified champion with remarkable performances against the likes of Guillermo Rigondeaux, Jorge Linares, Gary Russell Jr. and Nicholas Walters.

He'll be standing across the ring from a 23-year-old dynamo with big dreams, a big ego and a an even bigger punch. Lopez has superstar written all over him and is unbeaten in 15 fights with 12 of those wins coming by way of highlight-reel knockout. His unique combination of heavy hands, technical skill and youth make him a dangerous opponent for Lomachenko.

Could this be a passing of the torch or a harsh lesson by the teacher to the student?

DAZN News staff has made their predictions.

The fact that this fight was announced months ago and I'm just now settling on a winner speaks in volumes about the matchmaking here.

Many have compared it to the 2013 bout between Floyd Mayweather Jr. and Canelo Alvarez, and those comparisons are spot on. Lopez is the naturally bigger, stronger and younger fighter while Lomachenko is the smaller seasoned veteran who currently enjoys his perch on top of the mountain as boxing's best. Usually, these showdowns where youth battles experience end up with experience coming out on top.

This fight may end up being no different.

Lopez is certainly capable of pulling off the upset. The challenge is whether the 23-year-old is mature enough to keep his head on straight and adjust to Lomachenko's shiftiness as the fight progresses. As much as the fight has been made to be power vs. speed, it's more about timing. If Lopez can figure out when to throw and how to find his target, he will put himself in position to leave Las Vegas with four titles. But that's easier said than done as Lomachenko possesses some astounding footwork that has bedazzled opponents to the point of mental submission.

Lomachenko has seen it all and will need to have a mental lapse in order for Lopez to catch him with one of those heavy power shots. As long as Lomachenko can keep himself out of danger, it will limit the opportunities for his opponent to cash in his golden ticket. And if this is a boxing match, nobody is beating Lomachenko. With Lopez and his father unable to figure out how to slow down Lomachenko, this could turn into a runaway late with the Ukrainian adding the IBF title to his collection. There's a path to victory for Lopez, but Lomachenko is fully capable of making it a dead end before Lopez can find the street.

Lopez shouldn't fret — Canelo lost to Mayweather and look at him now. Teofimo Lopez is following the same trajectory. He's just not there ... yet.

This fight has the feel of when Canelo Alvarez faced Floyd Mayweather Jr. with the premise of the young, hungry lion, looking to become the king of the jungle. But standing in Lopez's way is arguably the pound-for-pound best fighter in the sport.

Lomachenko is the heavy betting favorite and rightfully so. But the 23-year-old has a viable chance of winning as he has power in both hands and Lomachenko has been sent to the canvas in the past.

Lopez says he can box with Lomachenko even though no one has been able to do that up to this point. That wouldn't be Lopez's best recipe for success. He has to stay in the pocket and try to make it a fire-fight because he can't win a boxing match with Lomachenko.

The fight will be competitive early but Lomachenko will turn it on in the middle rounds and turn Lopez's aggressiveness into an advantage and use it against his younger foe. He's going to keep catching Lopez with hard, stiff shots. Those will start to become too much for Lopez, and Lomachenko ends up dropping him in the beginning of the championship rounds to retain his belts.

This will be Lopez's toughest puzzle to solve as a pro, by far. I strongly doubt he will be able to have his way in the manner he has described in most interviews for the better part of two years. But, it won't be a shutout by any stretch. I expect this to join the long list of fights from recent years to provoke a huge amount of bickering over who really won. And, of course, a 2021 rematch with more than 250 fans in attendance.