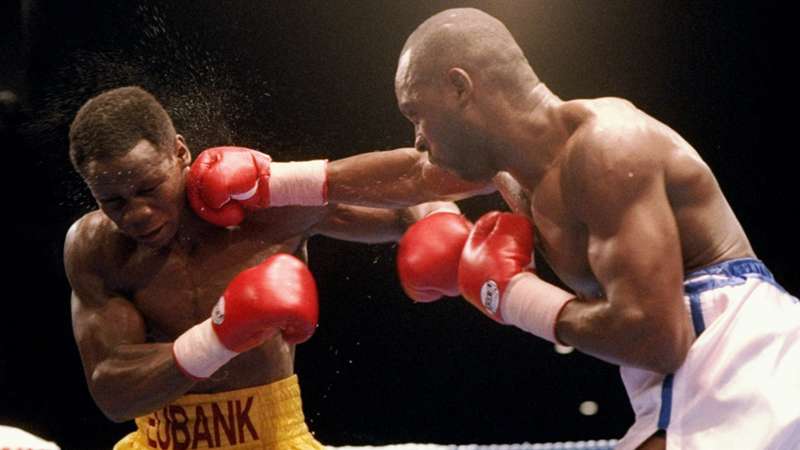 The two sons of these legendary British boxers revive the family feud on October 8.

October 8 at London's O2 Arena is set to be a historic night for British boxing as an age old family feud is re-ignited.

In the main event, Chris Eubank Jr. and Conor Benn meet in the ring in a fight which has been 29 years in the making live on DAZN and DAZN PPV in the UK, Ireland, Australia and New Zealand.

The fathers of both men, Chris Eubank Snr and Nigel Benn captured the imagination of the boxing world in the 1990s with two brutal fights, but the result of the second fight in 1993 is one that left a sour taste in the mouth of Benn.

But first, we have to go all the way back to 1990 for the first fight in this epic rivalry when Benn and Eubank Snr went head-to-head for the WBO world middleweight title.

When was the first Benn vs. Eubank Snr fight?

The first fight between these two rivals took place on November 18, 1990.

Where was the first Benn vs. Eubank Snr fight held?

The fight was held at the National Exhibition Centre in Birmingham, England.

Who won the first fight between Benn and Eubank Snr?

After a cagey start Nigel Benn landed the first meaningful blow in the fourth round with a right uppercut which caused Chris Eubank Snr to bite his tongue.

The extreme punishment taken was beginning to show on both men with Benn's eye swollen shut by round five, but he still managed to knock down his opponent in the eighth and the ninth.

Eubank Snr however came roaring back with a left right combination and a left hook which staggered Benn. While the defending champion survived the flurry, a straight from Eubank Snr sent Benn into the corner which forced referee Richard Steele to step in and stop the fight with five seconds left in the round following another assault from Eubank Snr who was now the new WBO world middleweight champion.

When was the second Benn vs. Eubank Snr fight?

Chris Eubank Snr went onto make three defences of his title before relinquishing the belt in order to fight for the vacant WBO world super middleweight against Michael Watson on September 21, 1991.

This particular fight was remembered for all the wrong reasons with Watson falling into after a Eubank Snr uppercut in round 11.

Nigel Benn also made the move up to 168lbs and became the WBC champion after beating Italy's Mauro Galvano.

Now with both men holding world title belts at super middleweight, a second fight between Benn and Eubank Snr was inevitable, and a date was set for October 9, 1993.

Where was the second Benn vs. Eubank Snr fight held?

The second fight took place at Old Trafford, the home of Manchester United in front of 42,000 fans.

Who won the second fight between Benn and Eubank Snr?

Compared to the first fight, the rematch didn't quite reach the heights of brutality with neither fighter being badly hurt, but there were flurries at the end of each round in an attempt to impress the judges at ringside.

One standout moment saw Nigel Benn knocked through the ropes in a corner, but he showed no signs of serious damage.

The final round was the most entertaining after both Benn and Chris Eubank Snr told they needed to win it in order to triumph on the cards.

What happened to Benn and Eubank Snr after the rematch?

For Nigel Benn, this rematch had finished him mentally and physically, and resulted in him losing his WBC super middleweight title twice to Steve Collins in 1996.

Eubank Snr also lost his title and unbeaten record to Collins via a split decision in 1995. He then retired briefly before returning to face Joe Calzaghe two years later who beat him on points.

There was one more world title shot for Eubank Snr before he hung up the gloves for good facing WBO cruiserweight champion Carl Thompson who he lost to via a split decision in 1998. The pair met in a rematch that same year, but the fight was stopped by the doctor due to Eubank Snr's swollen eye. This would be the final time Eubank Snr would fight in a boxing ring.