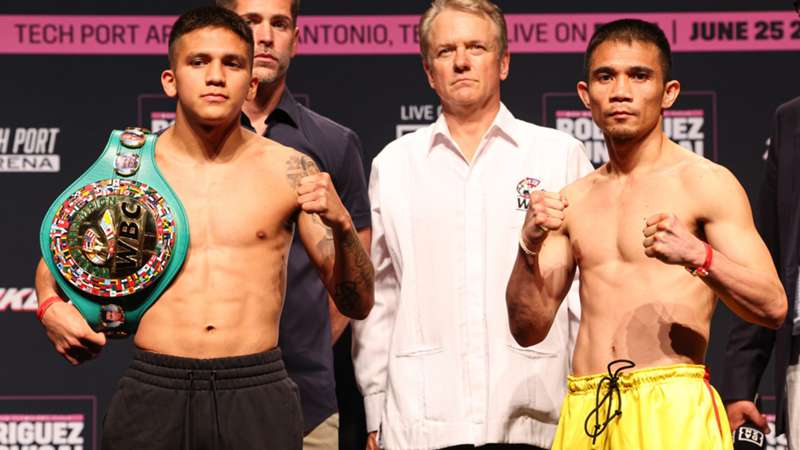 Boxing's youngest current world champion highlights a loaded card on Saturday for his first title defense as Jesse Rodriguez puts his WBC super flyweight belt on the line as he takes on former two-time WBC titlist Srisaket Sor Rungvisai from Tech Port Arena in San Antonio, Texas. The event can be seen worldwide, live, and exclusively on DAZN  tonight (excluding Thailand and Uzbekistan).

Two more world title fights are on the bill with Murodjon Akhmadaliev defending his IBF and WBA (super) super bantamweight titles against Ronny Rios, while the undisputed women's welterweight champion Jessica McCaskill puts all four of her belts on the line when she faces Alma Ibarra.

Rungvisai was supposed to square off with Carlos Cuadras for the vacant WBC title in February. But, about a week before the fight, Rungvisai had to bow out due to suffering an illness. Rodriguez, already on the undercard, stepped up to the plate. The 22-year-old dropped Cuadras on his way to a decision win to claim the first major world title of his career. Now, he returns to his hometown as a world champion.

“Fighting a guy like Rungvisai is going to bring me to a whole new level,” Rodriguez said recently in a release.

“He's a great fighter, but this is my time now. You have to take risks in this sport. That's what special fighters do. They said it was a risk me challenging for a World title fight on short notice, and now they say it's a risk-taking on a fighter like Rungvisai, but this is what I want. These are the types of fights you need so you can be remembered by the fans long after your career is done.

“I've always said that me and my brother are going to bring the big fights back to San Antonio, and this is just the start of it. We are so proud to be from this city, and we get that love back from the people there, so this will be a special night.”

Rungvisai hasn't competed in the United States since losing his WBC strap to Juan Francisco Estrada in April 2019. His last three bouts have occurred in his native Thailand. He makes his return to the U.S. in search of becoming a three-time WBC champion.

“I am very excited for this opportunity to fight for the WBC world title,” Rungvisai said.

“I will be at my best to win the WBC World title and become the first three times WBC World champion in the history of Thailand."

Here is everything you need to know about Jesse Rodriguez vs. Srisaket Sor Rungvisai.

The main card is scheduled to get underway at 8 p.m. ET/ 1 a.m. BST with main event ringwalks scheduled for 11 p.m. ET/ 4 a.m. BST. These timings could change due to the length of the undercard bouts.

Can I watch Rodriguez vs. Rungvisai on DAZN?

The card will stream live on DAZN in over 200 countries across the globe (excluding Mexico and Latin America).  You can sign up for a subscription here . However if you are in Argentina, Chile and Colombia you must download the DAZN app from the Apple App Store or Android Google Play store and then sign up from there, rather than via web browser.

Where is the Rodriguez vs. Rungvisai fight tonight?