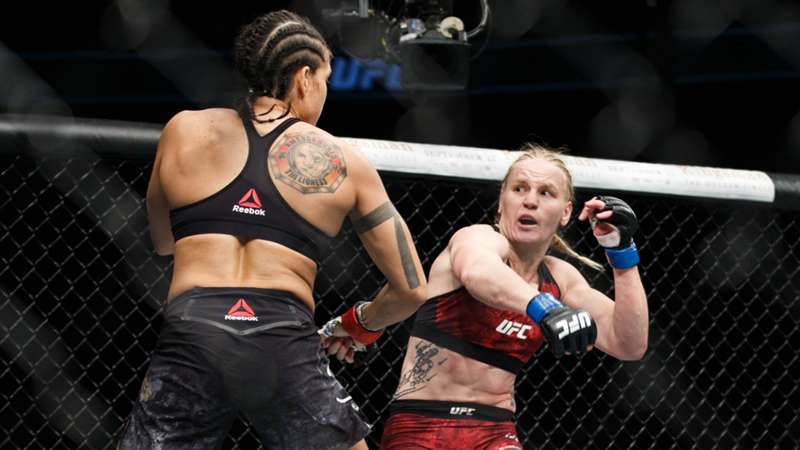 Shevchenko defends her flyweight title against Lauren Murphy on Saturday night but still has unfinished business with the GOAT.

Trilogies work best when the rivalry is knotted up at 1-1 with the rubber match on deck to settle things once and for all.

However, there are exceptions, and Valentina Shevchenko fighting Amanda Nunes for a third time falls into that category. I’m here for a third and final fight between them regardless of Nunes owning a 2-0 lead in the series. More importantly, Shevchenko is down, too.

In preparation of Shevchenko defending her flyweight championship against Lauren Murphy in the co-main event of UFC 266 in Las Vegas on Saturday night, “Bullet” was asked about the prospects of a trilogy fight with Nunes and she made it clear that she’s game.

“I think if destiny puts this fight in front of us most, yes, we’re going to do it,” Shevchenko told TMZ Sports.

“I’m kind of focused very much on my flyweight division and I just want to be better, better like fight and fight, and when (the trilogy) is going to happen, I am here.”

We should be here for it, too. After all, Nunes is ranked No. 1 on the women’s pound-for-pound list to Shevchenko’s No. 2. And who fought the GOAT closer than Shevchenko?

She lost via unanimous decision to Nunes in their first clash back in March 5, 2016. Nunes got the best of “Bullet” in that fight at UFC 196, opening up the pay-per-view which had Nate Diaz making Conor McGregor tap out to a rear naked choke in the main event and Miesha Tate defeating Holly Holm to be crowned the new women’s bantamweight champion of the world in the co-main.

Their very next fights had Nunes defeating Tate to begin her bantamweight championship reign of dominance, which continues today, and Shevchenko defeating Holm by unanimous decision.

After submitting Julianna Pena to an armbar in the second round, Shevchenko had more than earned a rematch with Nunes. That rematch would headline UFC 215 from Rogers Place in Edmonton, Alberta, Canada back in September 2017.

And it was starkly different, as the technically-sound Shevchenko more than made the adjustments to make it a closer fight — one that she arguably even won.

But when Bruce Buffer stood in the middle of the Octagon and read off the judges’ verdict only one judge had it 48-47 for Shevchenko, while the other two scored it 48-47 for a controversial split decision in favor of Nunes who retained her title.

The result triggered a shaking of the head from a dejected Shevchenko, who slowly paced the Octagon. Her hands on her hips next only added to her body language that exuded disgust that night.

“She didn’t hit (me) not one time, not one punch, nothing significant,” Shevchenko told Joe Rogan after the loss. “Look at her face. The nose is red from my punches. And why is she still (the champion)? She’s still? I really don’t understand.”

Shevchenko added: “I think that she didn’t win this fight.”

And Shevchenko wasn’t alone carrying that sentiment. To this day, plenty of MMA fans and critics believe that “Bullet” should have been crowned the winner and new bantamweight champion of the world that night in Edmonton, which showered Nunes with boos.

In the four years since then, neither Nunes or Shevchenko have suffered defeat. Nunes became a double champ, capturing the featherweight title and still reigns with both championships in her possession. Shevchenko returned to flyweight and quickly became the division’s champion and still reigns today, too.

There is a presiding feeling that perhaps only Shevchenko can topple Nunes and vice versa, although Pena will try to prove that notion wrong when she faces Nunes at UFC 269 on Dec. 11.

All being said, there’s residue of unfinished business between Nunes and Shevchenko. Their last fight left a foul stench in the air and the only way to clear it is to have the living legends and surefire Hall of Famers tangle one more time in the Octagon. It must happen.

It does and the trilogy will decide things definitively and finally satiate fans and critics alike.