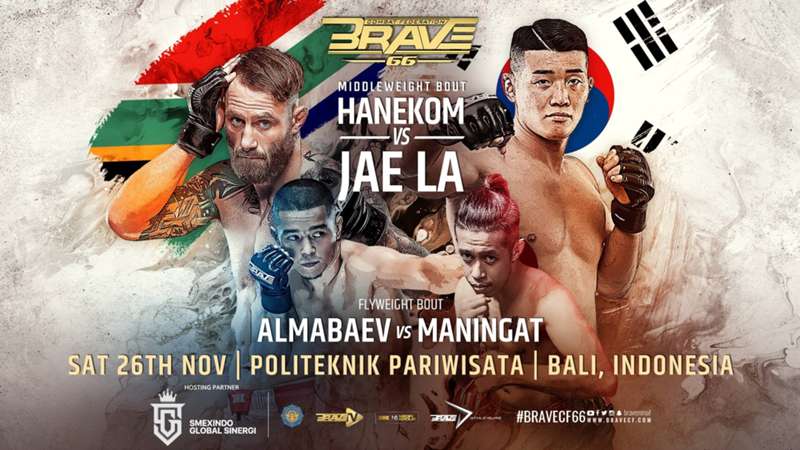 The South African was victorious in Bali on Saturday.

Indonesian MMA fans were rewarded for their unwavering support of the most global promotion when Brave CF 66 played out in the South-East Asian nation today. A spectacle of ten fights showcased Brave Combat Federation’s vast and deep international reach as 20 fighters from across the world stepped into the Brave CF cage in the picturesque Bali province. In the main event, the best was left for last as South Africa’s Chad “Superman” Hanekom sent shockwaves around the world when he put South Korea’s In Jae La to sleep with a vicious right elbow early in the first round of their Middleweight fight.

The first minute of the fight was just a feeling-out process as both athletes were finding their range and rhythm. At one point, they came close to a clinch, but it was clear that Hanekom was intent on building on his six stoppages when he pushed the South Korean away to create space before unleashing one of the most incredible elbow knockouts ever.

“Most people are speechless, that was pretty dope, my coaches and I have been practicing that for years. Working on instinct, spur-of-the-moment reactions, and just ticking boxes," said the number-two ranked Brave CF Middleweight.

When asked about his future aspirations, Hanekom said the following: “I've been on top of the division for a while now. I just came here to do a job and get the win, and I did it convincingly. That KO is going to send ripples around the world. As a wise man from Stockton once said: ‘I'm not surprised, motherf******’,” referencing global MMA star Nate Diaz.

In the co-main event of the evening, Kazakhstan’s Asu Almabaev proved why he is the number-three ranked Brave CF Flyweight when he defeated the Philippines’ Kenneth Maningat via submission (rear-naked choke) in the second round.

From the first bell, it was all Almabaev as he dominated his opponent with a grappling and wrestling clinic as Almabaev had Maningat pinned early on. The Filipino athlete stayed active from the bottom, working and throwing upward strikes. Maningat - who took the fight on short notice - eventually got tired, allowing Almabaev to unleash top-heavy blows. In the second round, it was more of the same as the Kazakh continued his dominance, proving too strong, too fast, and too technical before locking in a rear-naked choke to cement his place at the top of the Brave CF Flyweight division.

In the only Heavyweight fight of the night, the “Big Boys” did not disappoint with a blistering show as Australia’s Junior “The Juggernaut” Tafa finished Serbia’s Nicolas Djurdjevic via TKO (strikes) in the first round.

One of the most-anticipated fights in the Brave CF 66 card ended in disappointment for both sides as Mohammed Farhad and Ruel Panales fought to a No Contest. Farhad landed a clearly unintentional kick to Panales’ groin, when the Filipino Bantamweight made the movement to throw a kick of his own. Ruel tried to fight on, but couldn’t and the bout was left without a winner.

Brave Combat Federation now returns home to the Kingdom of Bahrain for Brave CF 67 - the penultimate show on the 2022 Brave CF calendar - taking place on December 12 before closing out the ground-breaking year with its final show in Dusseldorf, Germany for Brave CF 68 on December 17. Both events will be shown live on DAZN.