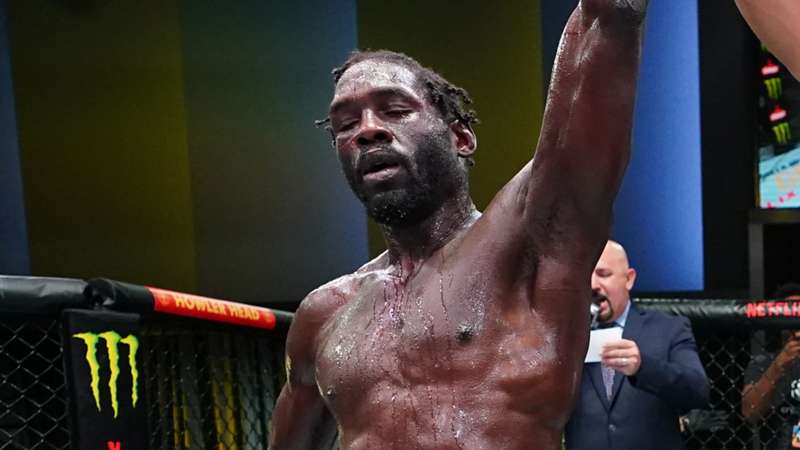 The veteran recognizes the middleweight world champion's artistry in the Octagon and doesn't want to give him any time to create Saturday night in Las Vegas.

With just a little bit of real estate in the Octagon, Israel Adesanya is able to draw from his many tools to strike with precision and illustrate his canvas with pure artistry. It’s as if that space affords “The Last Stylebender” the luxury of brushing the arts into mixed martial arts.

Jared Cannonier knows this well and wants to splatter any thoughts of Adesanya sitting back and creatively painting him red Saturday night. That’s when Cannonier will challenge for Adesanya’s middleweight world championship in the headliner of UFC 276 from the T-Mobile Arena in Las Vegas and live on pay-per-view.

Cannonier believes the first few minutes will be crucial in allowing him to download enough key information on Adesanya in real time.

“If there has to be that (feeling-out period), it’s probably going to be the first one and a half, maybe two minutes of digesting some stuff,” Cannonier tells DAZN over the phone. “And then there’s going to be action and I’ll have to continue digesting after that.”

If Cannonier computes this intel well, he believes he can smother Adesanya enough to finish him early. At least he has the aim of doing so.

“To be honest, I don’t want to have that feeling-out moment,” Cannonier says after thinking it over some more. “I want to get in there and go to work, put him away quick, fast and easy.

“I’m trying to end this thing in the first. As soon as the ref says go, the goal is to put him away, to finish and incapacitate my opponent and go home.”

It’s a lofty ambition considering how Adesanya has gutted through quality names in the division.

Everyone from Derek Brunson to Anderson Silva, Kelvin Gastelum, Yoel Romero and Paulo Costa has felt Adesanya’s marksman striking. Adesanya has been so dominant as middleweight champion that he’s begun double-lapping opponents, having defeated Robert Whittaker and Marvin Vettori twice each.

Cannonier respects the resume and knows it will take a mistake-free effort to have his hand raised.

“He’s ran through some of the division and rightfully so garnered a lot of notoriety,” Cannonier says. “He’s got the belt, a real good contract, all that good stuff so good for him.

“I have to be a 10,” he adds. “I just gotta be the best version of myself. Everything has to be clicking. It’s not just one thing that’s going to get it done. It’s got to be precision, power, speed, position … all that stuff.”

The veteran recognized Adesanya’s advanced skills and their potential for a clash nearly four years ago.

It was Nov. 3, 2018 at UFC 230 at Madison Square Garden and Adesanya had just made his pay-per-view debut by dismantling Brunson in one round. Cannonier was making his middleweight debut on the same card, where he stopped David Branch in the second. Cannonier took liberty of introducing himself to Adesanya backstage.

“I was aware of the potentiality of fighting this man who just fought in the same division that I’m just debuting in,” Cannonier reflects. ”I didn’t know it was going to be for the title. I just knew that there’s potential that I could fight him.”

That potential has turned into impending existence, as Cannonier helped force the issue with a hard-fought unanimous decision over Gastelum last summer followed by a second-round KO (hellbows) of a surging Brunson in February.

Cannonier has refrained from hurling any verbal jabs Adesanya’s way as he respects “The Last Stylebender” just as much today as when he approached him in November 2018.

“I don’t need [hate] to fuel what I do,” Cannonier points out. “I’m going into this with love. That’s a way more powerful weapon. I love doing this sport. I love learning from different perspectives. I love training and I love getting into there and competing.”

The 38-year-old, who has never been crowned a world champion over seven years in the UFC, has also done his best to separate the revelry of becoming a titleholder from the large task at hand Saturday night.

“I’m trying to get into a fight,” he says bluntly. “I’m not thinking about legacy, notoriety, being a champ or any of that bulls—t. It’s about the fight.

“I’ve done everything I can to be prepared so I could perform at the best of my ability. I’m getting into a fight Saturday night.”