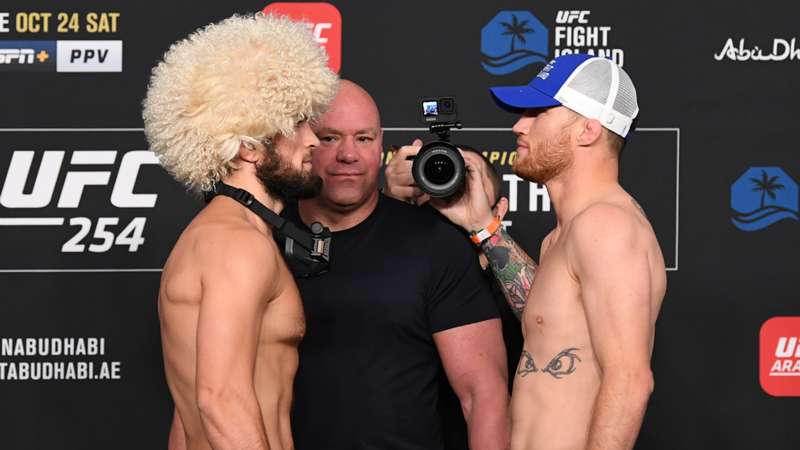 All the details about the price of the huge UFC 254: Khabib vs. Gaethje pay-per-view on Saturday.

One is arguably the most dominant champion in UFC history. The other will stop at nothing short of causing damage.

Those two ingredients will detonate in the Octagon on Saturday, when Khabib Nurmagomedov puts his lightweight title on the line against Justin Gaethje to headline UFC 254. The mega bout will take place live from the Flash Forum at Yas Island in Abu Dhabi.

The undefeated Nurmagomedov (28-0) has rejected any thoughts of a rematch with Conor McGregor with great disdain, opting to hone in on Gaethje with laser focus, instead. Defeating the dangerous Gaethje would only add to Nurmagomedov's fighting legacy. "The Eagle" is up for the challenge.

"I know he knows how to wrestle, but what about for 25 minutes," Khabib said about Gaethje during the press conference earlier this week. "I'm gonna go all night."

To that, Gaethje (22-2) is more than game for trying to do what no man has been able to do in the Octagon — knock out "The Eagle".

"The way I’m going to beat him is by putting him to sleep,” Gaethje vowed during an interview with ESPN. “Taking his body and taking consciousness away from his body. That’s how I win this fight."

That being said, UFC 254 has all the makings of being a must-see event.

For legacy! For gold!

Here's everything you need to know about how to watch UFC 254 on PPV, including pricing information.

How much is the UFC 254: Khabib vs. Gaethje pay-per-view price?

The UFC 254 main card is available in the United States via pay per view on ESPN+, which requires a monthly or annual subscription. The standalone PPV price for UFC 254 is $64.99 for current subscribers. For new subscribers, a bundle fee of UFC 254 and an ESPN+ annual subscription is $84.98.

Viewers in Germany, Austria, Spain and Italy can watch UFC 254 on DAZN, which has monthly subscription options. Current subscribers in those countries will have UFC 254 included as part of their subscription.

UFC 254 takes place Saturday, Oct. 24, with the pay-per-view main card starting at 2 p.m. ET. Khabib and Gaethje are expected to enter the Octagon at 4:15 p.m. ET approximately, although the exact time depends on the length of the earlier fights.

In the United States, the early prelims begin at 11 a.m. ET on UFC Fight Pass, ESPN 2 and ESPN+. The prelims continue exclusively on ESPN 2 and ESPN+ at 12 p.m. ET. Then, the ESPN+ pay-per-view main card starts at 2 p.m. ET.

In Canada, the early prelims and prelims are on TSN, and the PPV main card is available to order on Bell, Rogers, Shaw, SaskTel, Videotron, Telus and Eastlink, as well as UFC PPV on UFC Fight Pass.

To see TV, live stream and pricing information for other countries, visit UFC.com.