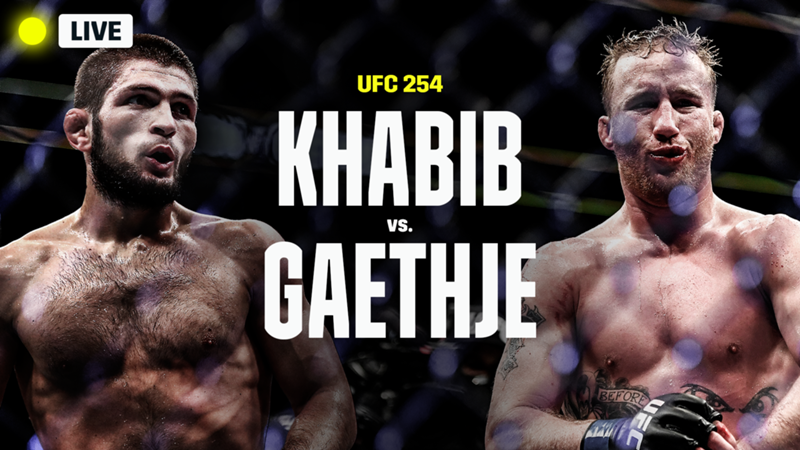 The undefeated Khabib Nurmagomedov dominated Justin Gaethje on "Fight Island" in Abu Dhabi, before calling it a career.

If this is indeed it, Khabib Nurmagomedov exits the UFC as arguably the greatest fighter in MMA history.

Nurmagomedov scored a second-round submission (triangle choke) of Justin Gaethje to retain his lightweight title at UFC 254, before announcing his retirement. Nurmagomedov took Gaethje down, assumed the mount position and skillfully turned it into a triangle choke to score the second-round submission. Gaethje tapped a few times, but the ref didn't notice it. After a few tense seconds, the ref stepped in and ended it, as Nurmagomedov improved to 29-0 Saturday night on "Fight Island" at the Flash Forum in Yas Island, Abu Dhabi.

Following the victory, Nurmagomedov dedicated the fight to his late father, who passed away this summer, and announced his retirement by laying his gloves in the center of the Octagon.

"This was my last fight," said Nurmagomedov, overcome with emotion.

A legacy that will never be equaled... #UFC254 pic.twitter.com/yck8dXSBQK

He added that after speaking with his mother, he agreed that this would be his final MMA bout.

"I promised her, it's going to be my last fight," he continued. "It was my last fight here. Tuesday, you guys have to put me No. 1 pound-for-pound because I deserve this."

He added: "Today's my last fight in the UFC."

If this is Khabib's last outing, he is leaving behind an indelible legacy at 29-0 and the reigning lightweight champion of the world, with victories over the likes of Conor McGregor, Dustin Poirier and Gaethje to name a few.

Round 2: Khabib already dictating a fast pace. Left hand behind the ear lands for Gaethje, but the champ just eats it. Gaethje with a stinging leg kick and the champ seemed to get hurt by it. But Khabib comes back with a takedown and he's going for the triangle choke. He has it cinched in. Gaethje is tapping, but the ref doesn't see it. The ref steps in and ends it. "The Eagle" soars yet again and remains undefeated, as he improves to 29-0. Just too good, as Khabib's growing legend continues. Khabib with a heavy heart, as his father died in the summer.

Round 1: Gaethje checks Khabib's temperature with a leg kick early, with both trying to gauge each other's moves and look for an opening. Big right hand lands for Khabib, but Gaethje counters with a shot of his own. Khabib swings and misses wildly with an uppercut, but sticks the jab. Gaethje with a kick that lands. Khabib is already pressuring Gaethje, but the American responds with a kick. Nurmagomedov with a body kick, as he continues to pressure.

Everything is on the feet, although Khabib briefly went for a takedown. He keeps pressuring Gaethje and lands two swift punches. Leg kick by Gaethje and Khabib responds with a punch. Gaethje comes back with a heavy-handed right that gets Khabib's attention. Front kick from Khabib and Gaethje with a counterpunch. Now, Khabib takes Gaethje down against the Octagon — where Gaethje doesn't want to be. Khabib isolates an arm, but the clock's final ticks save Gaethje. (10-9 Khabib)

4:41 p.m.: Bruce Buffer makes the fighter introductions and this main event is seconds away.

Does @TeamKhabib add to his legendary resume?

A last-minute prediction from Aljamain Sterling, as Gaethje has already made his walk into the Octagon.

I’m so torn on the main event, but smart money says this is like betting against Mayweather in boxing! Have to believe The Eagle will get it done again! 🦅 #UFC254

4:30 p.m.: It all comes down to this. Twenty-eight fighters have tried to defeat Khabib Nurmagomedov and all have failed. Will Justin Gaethje fare any differently? We're about to find out.

4:21 p.m.: Whittaker announced as the winner by unanimous decision, as all three judges score it 29-28.

Whittaker takes his back and Cannonier is in a world of trouble. Somehow Cannonier powers his way off the ground and they're back on their feet. Cannonier showing plenty of heart, as he plants a kick to Whittaker's midsection. He stuns Whittaker moments later with a right hand. Incredible ending. Whittaker delivers 65 head strikes this fight, while Cannonier produces 22 leg kicks. (10-9 Whittaker, 30-27 Whittaker)

Round 1: Cannonier immediately with a hard, rattling leg kick off the jab to get Whittaker's attention. Cannonier takes Whittaker off his feet with another leg kick, before slipping to the mat a second later. Whittaker with a stinging jab. Cannonier is tagging Whittaker's legs with kicks. Whittaker just misses with a high kick, but comes behind that with a punch that lands. Seconds later, he lands that high kick. Cannonier goes back to those outside leg kicks from the southpaw stance. Moments later, Whittaker responds with punches and that high kick combination. Cannonier does a nice job with the legs kicks, but Whittaker takes this round. A close first round. (10-9 Whittaker)

High level striking in this one!

Who took round 1️⃣ on your card? pic.twitter.com/P81Rh8nTS5

4:00 p.m.: Cannonier and Whittaker have both made their way into the Octagon, as this co-main event is seconds away now.

3:55 p.m.: Huge ramifications in this co-main event, with the No. 1 middleweight contender Robert Whittaker facing the second-ranked contender in Jared Cannonier. The winner will get a shot at Israel Adesanya, who has already expressed interest in facing Cannonier. Adesanya became the champ by defeating Whittaker in October 2019.

3:43 p.m.: Volkov plants a kick into Harris' midsection, as Harris lets out an audible groan and gets bent at the waist. Volkov swarms him with punches up against the Octagon before the ref ends it. Impressive win for Volkov and on his birthday.

3:40 p.m.: Great sequence late in the first round, when Volkov fakes a knee and hurts Harris with a punch, instead. Volkov moves in with a barrage of punches, looking for a potential finish, but Harris fights back and powers out with stiff counters. Harris complained about poor vision in one of his eyes after the round.

3:30 p.m.: Walt "Big Ticket" Harris making his walk to the Octagon, as he's about to scrap with Alexander Volkov in heavyweight action. Harris has shed 30 pounds entering this bout.

3:25 p.m.: Still reeling from the dynamite Hawes has in his hands. It will be interesting to see him work his way up the middleweight rankings. That was the second-quickest finish for a debuting middleweight.

3:12 p.m.: Oh my goodness! Phillip Hawes just destroyed Jacob Malkoun and it only took him 18 seconds! Hawes caught Malkoun with a right behind the ear and kept the damage coming with a heavy-handed right and left. The ref stepped in before he could rain down with some hammer fists.

An incredible debut for @PhillipHawes5!

3:05 p.m.: Jacob Malkoun vs. Phillip Hawes in a middleweight tilt is up next.

3:00 p.m.: The champ is here, as Khabib Nurmagomedov has arrived to the Flash Forum.

The Champ is on his way! 🏆 pic.twitter.com/s58hcqdmqW

🍀 @LaurenMurphyMMA stating her case at the top of the division!

2:50 p.m.: Murphy showing nice adjustments to Shakirova in this second round. Murphy currently in the mount, letting loose on some punches.

2:30 p.m.: That was a savage finish for the oncoming force that is Magomed Ankalaev. Lauren Murphy vs. Liliya Shakirova in women's flyweight action is next.

2:24 p.m.: Don't question who the better fighter is between Magomed Ankalaev and Ion Cutelaba ever again. Ankalaev drops Cutelaba with a thud via a right hook, vicious left hand, before eviscerating him with savage hammer fists to get the first-round KO. Ankalaev is a problem in the light heavyweight division.

2:00 p.m.: The UFC 254 main card pay-per-view is upon us, with Magomed Ankalaev vs. Ion Cutelaba in light heavyweight action kicking this one off.

1:45 p.m.: Wow! That's how you crumble a "Skyscraper!" Tai Tuivasa banged Stefan Struve with a solid right hand upside the temple. Sensing he hurt the taller heavyweight, Tuivasa pummeled him up against the cage, before dropping Struve in a heap with a vicious, measured right uppercut. First-round KO for Tuivasa, who didn't have any trouble getting inside of a nine-inch height deficit to cause massive damage.

🇦🇺 @BamBamTuivasa with the buzzer beater and he's ready to celebrate!

1:00 p.m.: Nathaniel Wood vs. Casey Kenney is up next, as the prelims continue. We are also an hour away from the launch of the UFC 254 main card pay-per-view.

12:47 p.m.: Impressive debut by Shavkat Rakhmonov, who makes veteran Alex Oliveira tap with a first-round submission via a nasty, tight guillotine choke. Rakhmonov blasted Oliveira with a big right hand to the temple, pressed him up against the Octagon and secured the guillotine moments later to cinch the victory.