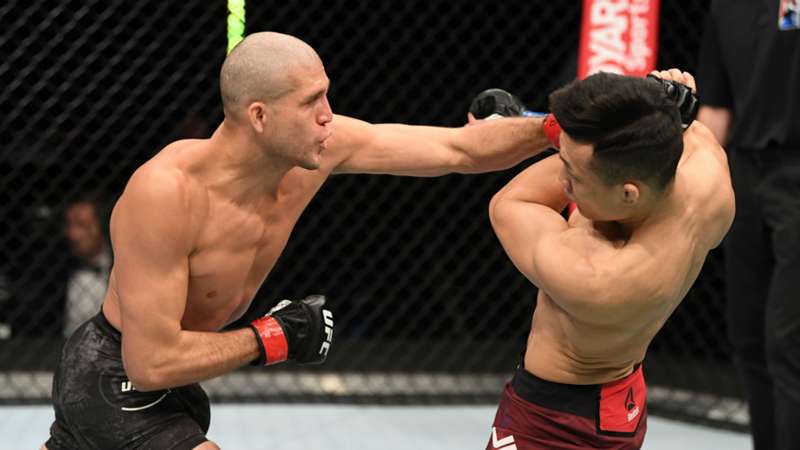 Brian Ortega has had quite journey to securing another shot at becoming the featherweight champion.

Not many fighters get the opportunity to win one UFC championship.

Brian Ortega gets a second chance when he takes on featherweight champion Alexander Volkanovski in the main event of Saturday's UFC 266 from T-Mobile Arena in Las Vegas. Back at UFC 231, Ortega came up short against then-champion Max Holloway, losing via fourth-round TKO in an all-action affair.

The war left Ortega battered and bruised, and it forced himself to look in the mirror and realize the way he was preparing and competing wasn't going to get him to where he wanted to.

So the California native got rid of his coaching staff and completely changed his lifestyle. The new way of life proved to be effective in his next fight as Ortega had arguably his best performance in dominating and battering Chan Sung Jung for 25 minutes to win a lopsided decision in October 2020.

Before he attempts to capture UFC gold, Ortega sat down with DAZN News to talk about finally getting a crack at Volkanovski, what he did to change his ways, and how he envisions become the 145-pound champion.

DAZN: How does it feel now that the fight is finally here after it getting pushed back six months due to Volkanovski testing positive for COVID?

Brian Ortega: It feels good. This has happened twice in my life now, where I get ready for a fight and then have to wait almost to the end of the year for it to happen. It happened for my first title fight, and now it’s happened with the second one, and they were both within the week of the fight. So I can say I've been there, done that. Now this time, I'm more mentally prepped for it. Whenever you go through something, you have an idea of what’s not foreign anymore. You have a general understanding of how to react, act, and keep your mind from going to different places where you don't want it to go, but typically stress. You just chill. You ride the (roller) coaster, and you take the good things. At the end of the day, it’s perspective. How do you fucking see things? If you see a negative, and if you see I'm going to stoop in a way where it's going to affect you, then you should probably try looking and changing that lens. That's what my last situation has taught me, and it's working until it unworks again, and then I'll try to find a different lens, but as of right now, I feel good.

DAZN: What's the most significant difference you noticed about yourself, going from that experience that you had with Max to now, that you can bring coming up into the fight next weekend?

BO: I know how to fight. Honestly, before, I just had heart. I would just go in there, and I would fight, and I would test your chin against mine and whose breaks first, and then I would make some happen within the chaos. I had ji-jitsu skills, so I relied heavily on that, but when it came down to game planning and nutrition and shaping my conditioning and all these other things. I had no idea what I was doing because what I was doing was winning fights, so I just figured if it wasn't broken, don't fix it.

DAZN: But do you feel like that was the best thing to happen to you then, because, like you said, you're living that reckless style of fighting and ended up costing you against Max?

BO: My life was also reckless. My situation I was in and what I was doing, and I was also reckless in that aspect. I would just fucking party non-stop, train, and then party non-stop after the fight was over. Then I would start slowly finding myself in these patterns of what I thought a successful celebrity fighter meant. I was always a good person, but I still found myself in these habits, and I quickly sunk into them. Partying leads to things, and you just end up having fun.

DAZN: Was it a "too much, too soon" type of thing, you feel like?

BO: It hit me pretty quick. The way the people and the things that were around made it seem like it for sure hyped it up. Give someone who never had nothing a lot, and you sure confuse the fuck out of them because now you're trying to figure out what to do. I've always stayed the same, but I thought, ‘Oh man, I wanted to miss out.’ I wanted to catch up on life that I missed out I used to call it. I used to say, ‘Man, I missed three months of my life, so I gotta catch up.’ So I would do three months of partying within one month every fucking day. Things like that didn't lead me to the right place. Whether it was training. Whether it was the lifestyle. My eating food. I was always eating Jack in the Box. I had no diet. No diet. No nothing.

DAZN: When you envision the fight in your head, Brian, how do you right the wrongs of what happened a couple of years ago and become the UFC featherweight champion?

BO: Perspective. The wrong has already been written. I became a better fighter. I'm becoming a better human being. This title, have it or not, doesn't change who I am. The only thing that changes is the win, right? The win is what I want because it's a goal that I have set for myself since I was a kid. So for me, it would be a dream come true. But when it comes to personal interest, and I fucking want the thing, it's more objective. I'll win the belt, and I'll fucking grab it and throw it on the fucking floor. It's more like I set myself to do something, and I'm going to fucking do it.