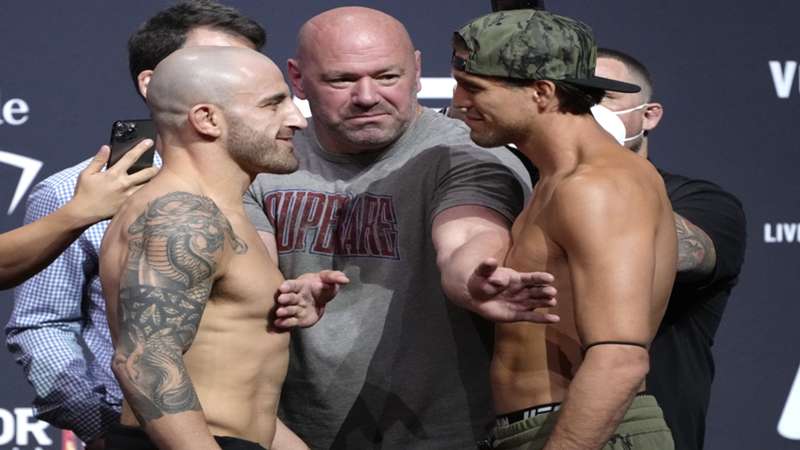 Alexander Volkanovski wins one of the best featherweight title fights in UFC history.

Going into their UFC 266 main event clash, Alexander Volkanovski made it clear he didn't like Brian Ortega after their coaching stint on The Ultimate Fighter.

Volkanovski's disdain and Ortega's slick submissions combined with both guys featuring the heart of champions made it one of the best fights in featherweight history. But there had to be a winner, and it was Volkanovski, who won by unanimous decision (50-44, 50-45, 49-46) to retain the 145-pound championship from T-Mobile Arena in Las Vegas. DAZN News had the fight scored 48-47 for Volkanovski.

“I’m a normal human being. Just hard work got me to where I am,” Volkanovski said in his post-fight interview. “Sky’s the limit for any of you. All them doubters, I’m going to keep proving you wrong time and time again.”

After a back-and-forth opening two rounds, the third ended up being one of the greatest rounds in UFC history.

Ortega dropped Volkanovski with a glancing blow. Then, the two-time featherweight title challenger jumped on Volkanovski and snatched in a mounted guillotine. Ortega squeezed as hard as he could and appeared to be moments away from a submission victory and winning UFC gold for the first time. But Volkanovski slipped out. It wouldn't be the last time the champion was in a compromising position.

Volkanovski unloaded a series of vicious ground and pound punches. Amid the chaos, Ortega threw his legs up and snatched in a triangle choke. Again, it appeared Volkanovski would tap out. However, "The Great" showed mental toughness and somehow escaped from the jaws of defeat. From there, it was all Volkanovski as he blasted with a series of shots in the final moments of the round. The crowd roared when both guys made their way back to their respective corners.

Ortega looked to be spent entering the fourth round. However, he had a little more in the tank as in the early part of the stanza, he attempted to lock in another guillotine choke, but Volkanovski wasn't in any danger this time. Volkanovski made it back to his feet and beat on Ortega for the remainder of the round.

In the fifth and final round, Ortega dug down deep and left every single drop of energy he had left inside the octagon. Volkanovski was firing with shots of his own to survive the final barrage and retain the belt for the second time and extend his overall winning streak to 20. The crowd gave a standing ovation to Volkanovski and Ortega for their warrior spirit in the 25-minute affair.

“He’s good,” Volkanovski said about Ortega. “I thought I was in his head, and then he came back even stronger. I feel like an idiot saying some of the things I did cause he proved himself.”

facebook twitter whatsapp
Referee Herb Dean asks Ortega if he can continue and asks how many fingers he's holding up. And he lets him go.

Ortega somehow gets in another choke. But Volkanovski slips out and getas top control.

Volkanvski is beating up Ortega. He lands another flurry of punches but Ortega moves enough and changes positions. What a war of attrition. Ortega needs a finish. (10-9 Volkanovski, 39-37 Volkanovski)

facebook twitter whatsapp
Accidental clash of heads busts Ortega more than he already. His nose is leaking blood. Volkanovski is targeting it and nailing it with th ejab.

Ortega drops Volkanovski with a left and sinks the choke in deep. Volkanovski is on the verge of tapping out. He somehow escapes and starts uncorking a litany of shots. Ortega survives and throws up a triangle choke. He sinks it in deep. Volkanovski looks again to be on the verge of tapping out. But he shows the heart of a champion, slips out and unloads ground and pound shots to the bell and Ortega survives.

One of the best rounds in championship history. (10-9 Volkanovski, 29-28 Volkanovski)

facebook twitter whatsapp
A combination to begin the second for Ortega. A glancing left connects for Ortega. Volkanovski lands a body kick followed by a right hand. Straight right down the middle for Volkanovski. Ortega is getting bloodied and bruised. A one-two from the champ, as he's getting in a bit of a rhythm. (10-9 Volkanovski, 19-19)

Ortega catches a kick and lands a left to end the round. An even round until the final moments with the challenger pulling slightly ahead. (10-9 Ortega)

facebook twitter whatsapp
It's time for the main event of UFC 266 as Alexander Volkanovski (22-1) defends the featherweight title against No. 2-ranked Brian Ortega (15-1, one no-contest).

Typically, when there's hatred, it makes for fireworks. Can't wait to see what happens.

Shevchenko def. Murphy via TKO at 4:00 of the fourth round.

Shevchenko stymied Murphy for over three rounds and had things well in control. It looked to be a matter of time before she put Murphy away. It finally happened when Shevchenko connected on check right hook that wobbled Murphy. Shevchenko saw Murphy was in trouble and was relentless from there. She poured vicious shots on to Murphy. Seeing Murphy had no chance of coming back, referee Keith Peterson put her out of her misery and Shevchenko has now made the sixth consecutive defense of her 125-pound belt.

The only question is, who's next for the most dominant women's fighter in the UFC?

Shevchenko has things in control

facebook twitter whatsapp
Through two rounds, it's all Shevchenko. The champion landing power shots with both hands, throwing crisp kicks, stuffing Murphy's takedown attempt and securing two takedowns of her own.

Murphy needs to figure things out and in a significant hurry.

facebook twitter whatsapp
It's time for the co-main event of UFC 266 as Valentina Shevchenko (21-3) defends her women's flyweight title against No. 3-ranked Lauren Murphy (15-4).

Shevchenko is a massive favorite and rightfully so. Can Murphy be the one to end the dominant reign?

After two action-packed rounds that could have gone either way. Then Lawler connected on a crisp right hook to drop Diaz. Diaz went to his back and it appeared he wanted to bait Lawler in. Instead, he told Herzog he could no longer continue.

Robbie Lawler evens the score with Nick Diaz at #UFC266@Ruthless_RL wins by TKO when Nick Diaz couldn't get back to his feet. pic.twitter.com/UHmEqYkPUb

A weird ending to what was an entertaining fight. But what do you expect when Nick Diaz is fighting?

Diaz and Lawler slinging leather through one

facebook twitter whatsapp
If you thought Diaz was going to get a feel after being gone for over six years, think again. He came right out with a back kick, which missed. From there, leather was slinged.

For the majority of the opening round, Diaz and Lawler stood in the pocket and threw bomb after bomb with neither guy taking a back seat.

What a fight so far!

Originally, the bout was set to occur at welterweight but Diaz asked the UFC at the beginning of the week to switch it to 185 pounds and they agreed to it.

Diaz, the former Strikeforce welterweight champion and UFC welterweight title challenger, returns for the first time since UFC 183 in 2015 against Anderson Silva.

Lawler, the former UFC welterweight champion, is in dire need of a win. He's lost four in a row.

Diaz and Lawler fought at UFC 47 with the former winning via stoppage.

What does Diaz have left? Can Lawler garner revenge?

A smart game plan from Blaydes. The name of the game was his wrestling and used it well. Anytime Rozenstruik picked up some momentum on the feet, Blaydes dumped him on his butt.

A good bounce back for Blaydes after losing to Derrick Lews in his last time out. He called out the loser of the heavyweight title fight between champion Francis Ngannou-Cyril Gane, former titlist Stipe Miocic or Jon Jones.

A Blaydes-Miocic wouldn't be the worst thing to see. Sign me up.

Time for the big boys

facebook twitter whatsapp
Up next at UFC 266, No. 4-ranked Curtis Blaydes (14-3, one no-contest) takes on No. 6-ranked Jairzinho Rozenstruik (12-2) in heavyweight action.  A classic striker vs. wrestler matchup. Can Blaydes get it to the ground or does Rozenstruik pound him out?

After an entertaining opening round from both fighters looked to be headed towards a second. Then with about 30 seconds remaining, Andrade connected on a three-punch combination that sent Calvillo back and in trouble. Sensing she could finish her off, Andrade uncorked a barrage of power shots. Time was winding down but referee Herb Dean wasn't going to let Calvillo continue to absorb the punishment and stepped in to wave it off.

A much needed win for Andrade after losing to Shevchenko in her last time out. In a smart move, Andrade called out the winner of the UFC 268 fight between women's strawweight champion Rose Namajunas and Zhang Weili. Andrade stopped Namajunas to win the 115-pound title and then losing Weili in her first title defense.

facebook twitter whatsapp
Kicking off the UFC 266 main card is former women's strawweight champion and No. 1-ranked Jessica Andrade (21-9) takes on No. 5-ranked Cynthia Calvillo (9-2-1) in women's flyweight action. Andrade is coming off of a title loss to current 125-pound champion Valentina Shevchenko at UFC 249 and needs a win to stay on course for another crack at the gold. For Calvillo, it's a chance to vault up closer to netting her first UFC title shot.

facebook twitter whatsapp
Welcome to DAZN News' live coverage of UFC 266. An exciting night of fist-a-cuffs is expected with two world championship fights along with the return of Nick Diaz.

Go get some refreshments, find a comfy seat and enjoy our UFC 266 coverage.