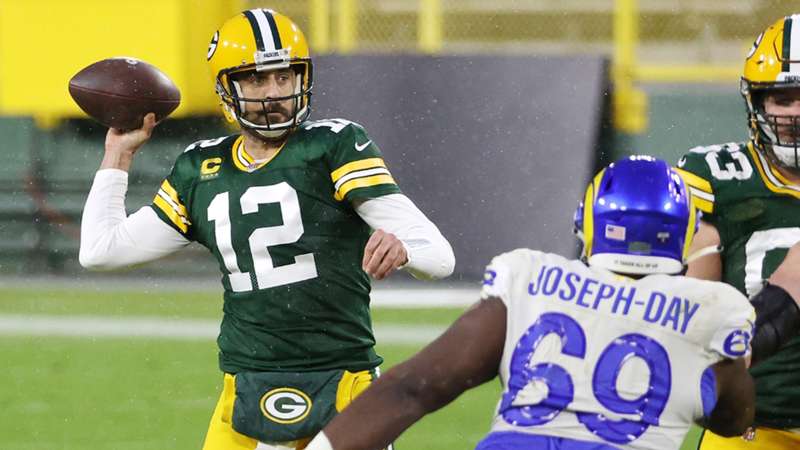 Aaron Rodgers shines as the Packers move on.

It took until the fourth quarter for the Green Bay Packers to feel comfortable as they defeated the Los Angeles Rams, 32-18, in the Divisional Round on Saturday.

Despite racking up huge advantages in total yards (484-244), total plays (72-50) and time of possession (36:12-23:48), the Packers couldn't breathe easy until late in the game at Lambeau Field. That's because a steadfast Rams team, led by an efficient Jared Goff at quarterback (21/27, 174 passing yards), would not go quietly in the night. Every time the Packers appeared to be cruising, the Rams found a way to scrape their way back into the game.

The biggest example came just before halftime, when the Rams faced a 13-point deficit within the the closing moments. Undeterred, Goff masterminded a nine-play, 75-yard drive down the field that resulted in a four-yard Van Jefferson touchdown reception. That brought LA to within six points, and while the Packers managed a field goal on the final play of the quarter to extend the halftime lead to nine, it still kept the Rams close heading into the break.

It would be even tighter in the third quarter, when the Rams were once again able to respond to a Packers' score with a timely touchdown of their own. A Cam Akers major, followed by a smart bit of trickery on the two-point conversion, brought the Rams to within a single possession with 5:45 left in the penultimate quarter — but that would be as close as they could get.

The final period was all Green Bay, as the Packers' defence thwarted Goff and the Rams' offence on consecutive drives, opening the way for the home team to finally put the nail in the coffin. A 58-yard touchdown pass from Rodgers to Allen Lazard is what ultimately put the game out of reach, as the Packers went away from their methodical game plan for a spectacular moment of briiliance between quarterback and receiver.

facebook twitter whatsapp
It was a valiant effort by the Rams, but the Packers' quality won out in the end.

facebook twitter whatsapp
It's a 14-point game, Green Bay has the ball, and this one is over.

facebook twitter whatsapp
The Rams had to go for it on 4th & 14 with just 5:04 remaining, but Goff is sacked for a turnover on downs. This feels like it's finally academic now.

Rodgers uses the play action fake and airs a long pass out for Lazard. It's a 58-yard TD pass, and it may be the nail in the coffin for the Rams.

facebook twitter whatsapp
There have been several times where it seemed like the Packers would pull away for good, biut the Rams deserve credit for finding ways to keep themselves in it despite no playing particularly well.

Well, they took full advantage of that stop, capping a 74-yard, 11-play drive with Akers punching it in.

Direct snap to Cam Akers and he's IN with authority! #RamsHouse #NFLPlayoffs

The Rams then go for a two-point conversion, and a nice bit of lateral trickery leads to Akers once again running the ball into the end zone. That was nice.

The Rams finally get a stop

facebook twitter whatsapp
For the first time today, LA forces the Packers to punt. Let's see what the Rams can do with it, down 15.

The home team needed just 2:50 on that first drive of the second half to find the end zone, with Jones plowing in for the score. The biggest play of the drive was a 60-yard run by the running back.

The Packers fail to convert another two-point attempt, but it's 25-10 Green Bay.  12:14 left in the third quarter.

Packers receive the ball to start the second half

LA did well to keep this game reasonable, as it felt like the Packers were starting to pull away.

The Rams' late TD means they are well within striking distance over the final 30 minutes, but they'll need to find a way to limit Rodgers' consistent effectiveness in advancing the football.

Green Bay's able to regain some of its cushion as it get into FG range quickly. The Packers try a couple of times to get into the end zone, but a pair of near interceptions thwarts those attempts.

Instead, it's Crosby booting in a 39-yarder for the three points.

.@crosbykicks2 hits the 39-yard FG to end the half! #Packers lead the Rams, 19-10. #LARvsGB | #GoPackGo pic.twitter.com/6fadqgfIDw

Los Angeles is right back into the game as a 75-yard drive results in a major just 33 seconds from halftime. Goff finds Akera alone just inside the end zone, and all of a sudden it's anyone's game again.

The Rams answer back quickly.

The Rams needed that one as they didn't want to go into the locker room down 13.

On 3rd & Goal from the 1-yard line, Rodgers rumbles into the end zone. That was an impressive run from the veteran.

AARON RODGERS IS IN. #GoPackGo #NFLPlayoffs

On their first drive after giving up the game's first touchdown, the Rams look to equalize quickly. However, some superb defending by the Packers stops the visitors in their tracks, and they're forced to punt on 4th & 10 from their own 22.

The highlight of that defensive stand was this big sack by Smith.

This time the Rams cannot stop Green Bay's red zone offence as Rodgers finds Adams on 3rd & Goal from the 1-yard line. That was a bullet of a pass from the QB.

Rodgers. Adams. Another TD from 12 to 17. #GoPackGo #NFLPlayoffs

facebook twitter whatsapp
It's shaping up as a chess match between two very good teams, although the Packers seem to be the (slightly) better of the two in the early going.

It's all tied up as Gay hits a 37-yard attempt.

It looked like Green Bay was going to march down the field for a touchdown on its first drive, but the Rams' red zone defence did its job in stifling Rodgers and his receivers.

Here are the inactives for today's contest