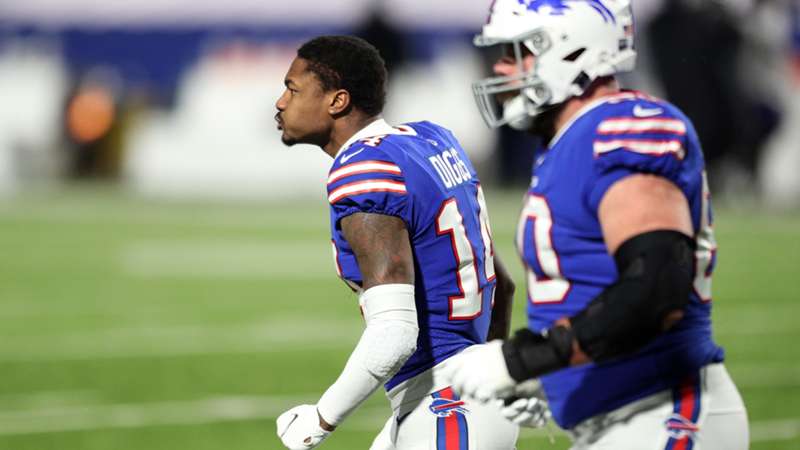 Buffalo moves on to the AFC Championship game.

In what was billed as a battle of quarterbacks, it was the defence that was the difference for the Buffalo Bills in a 17-3 victory over the visiting Baltimore Ravens in the Divisional Round playoffs on Saturday.

Neither Josh Allen nor Lamar Jackson were able to impose their usual brand of dominance onto the game, which was played in windy conditions in Orchard Park, N.Y. The wind played havoc not only with the Bills' passing game in the first half, but also with both teams' kickers — the first three field goal attempts were misses (two by the Ravens, one by the Bills).

Baltimore kept the ball on the ground for much of the contest, but the Jackson-led running game was met by an eager Bills defence that continually made things miserable for the visitors. Four well-timed sacks by Buffalo largely negated the brilliance of Jackson, who was limited to 34 rushing yards before being forced out of the game with concussion-like symptoms at the end of the third quarter. The 24-year-old did manage 162 passing yards before leaving the game, but the defining play of the night was an interception on a long Jackson pass that was returned 101 yards for what proved to be the final touchdown of the contest.

For Allen's part, the Bills QB ended with decent numbers — 206 passing yards with a TD on 23/37 completions — but it was nowhere near the output the third-year pivot has made Bills fans accustomed to over the course of the season.

Regardless, a big third quarter by the Bills proved to be the difference — the score was deadlocked at 3-3 to start the second half — as they advanced to next week's AFC Championship game.

Buffalo will face the winner of Sunday's Browns-Chiefs matchup.

facebook twitter whatsapp
A big second half proved the difference for Buffalo, which moves on to the AFC Championship game.

Huntley does well to lead the Ravens down the field quickly, but a good red zone stand by the Bills defence stops Baltimore from cutting into the lead.

Bass tries a 44-yarder into the wind, but it sails wide left. That was an ambitious attempt given the conditions.

Lamar Jackson is out for the rest of the game

facebook twitter whatsapp
The Ravens will have to try to mount an improbable comeback without the reigning NFL MVP.

BREAKING: Lamar Jackson has been ruled OUT. 😔 pic.twitter.com/aAiT9N8LAK

Tyler Huntley is in for Lamar Jackson

facebook twitter whatsapp
Jackson hit his head pretty hard on the Ravens' last drive and is in concussion protocol.

Lamar Jackson is currently being evaluated for a concussion.

It's been a nightmare quarter for the visitors, who give up two TDs in the period.

The 101-yard pick-six has to be demoralizing, especially given how close the game was up until that point.

facebook twitter whatsapp
It's a pick-six as Johnson returns it 101 yards for the TD! That ties a playoff record. Unreal.

facebook twitter whatsapp
Someone finally found the end zone as Buffalo completes a 66-yard drive with a major.

Just what we needed. 😏

It was supposed to be a QB battle, but high winds and some good defensive play have largely neutralized Allen and Jackson.

The Bills have just six rushing yards so far, to go with 108 passing yards, while the Ravens' split is way more equal (103-77). One would imagine that the Bills will look to vary their offence more in the second half.

Tucker redeems his earlier misses by nailing a 34-yarder through a pair of uprights that were waving like one of those wacky inflatable people you see at car dealerships.

Back on track. Tie game. @jtuck9 drills a 34-yard field goal to tie the game at 3-3 just before halftime. pic.twitter.com/Yn55jvTExg

Tie game, right at the half.

The Ravens survive a -9 yard sack and three consecutive penalties that combined to make it 2nd & 29 from their own one-yard line. An 11-yard pass is followed by a 21-yard pass that is hauled in nicely by Brown to get Baltimore out of the jam.

Allen gets caught by a pair of Ravens for a 12-yard loss on 3 & 8, and it's the first sack of the gameon the Buffalo QB.

Another missed field goal for the Ravens

Tucker is not having himself a good night as he once again strike an upright on a FG attempt, this time on a 46-yard attempt with the wind at his back.

The way this game is going, these misses could come back to haunt Baltimore.

There are 13:16 left in the second quarter but it feels like offence will be tough to come by in this game.

There hasn't been much scoring but the differing styles employed by each team is very much on display.

It took a bit longer than expected, but the first points are on the board as Buffalo hits a 28-yarder.

This has nothing to do with the game, but it's kinda cool regardless. On sale at Bills Stadium...

A 41-yard attempt by Justin Tucker, who the television commentator says "never misses," hits the left upright. A lengthy Ravens drive comes to nothing.

7:36 remaining in the opening quarter.

facebook twitter whatsapp
Tyler Bass launches the ball into the night sky to get things under way.