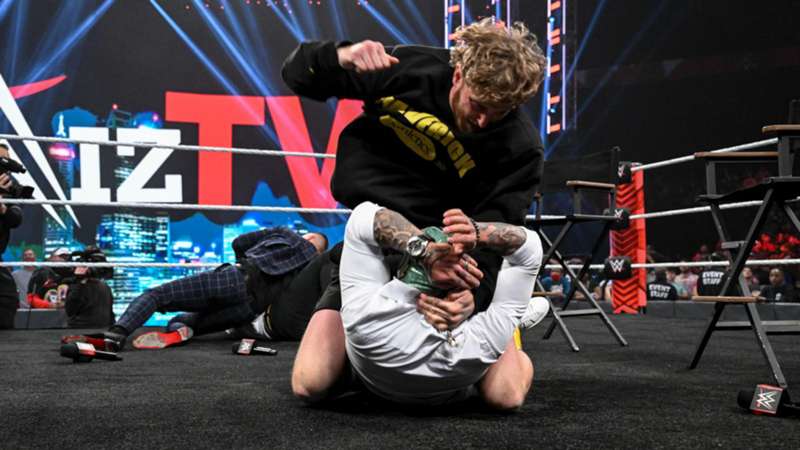 WWE
Watch Katie Taylor vs. Amanda Serrano only on DAZN

Logan Paul talks with DAZN ahead of pro wrestling debut at WrestleMania 38.

Athletes and celebrities getting involved at WrestleMania is nothing new.

There's been Mike Tyson, Snoop Dogg, Donald Trump, Floyd Mayweather Jr., Mickey Rourke, and Pete Rose to name a few. Logan Paul will be making his second consecutive at pro wrestling's annual extravaganza as he competes in his first-ever match as the social media star and pro boxer teams with former two-time WWE champion The Miz to face off against Rey and Dominick Mysterio on night one of WWE WrestleMania 38 on Saturday from AT&T Stadium in Arlington, Texas.

I’m going off the top rope at Wrestlemania on April 2 and no one can stop me @WWE pic.twitter.com/Tn1XMkLTp6

At last year's WrestleMania 37, Paul sat ringside during the Kevin Owens vs. Sami Zayn match. However, Paul should have stayed outside of action because after he pushed Zayn down to the mat, he got hit with a "Stone Cold Stunner" from Owens at the contest's conclusion.

"The Maverick" liked the experience so much that he's ready to put on the wrestling tights and get physically involved.

"It's crazy," Paul admits to DAZN. "There's gonna be 100,000 people watching me wrestle in a speedo. I asked my fans on Instagram. They want me to wear a speedo, so I think I'm gonna try to get that done. I've never done it before professionally. I'm with legends in the ring. These guys have been doing it forever; The Miz and The Mysterios. It's just another one of those things (where) I'm just gonna close my eyes, work as hard as I can, dive in and immerse myself into this art form."

The experience hasn't been all fun and games for Paul. There have been times when it hasn't been all it's cracked to be. But, when it's all said and done, Paul is having a ton of fun appearing on WWE Raw and training with The Miz in preparation for WrestleMania 38.

"Sometimes I go in there, and it's I never don't have fun, but sometimes I'm really nervous," Paul said. "Sometimes I go in there like 100 percent and just (be) like, ‘F— it’, (and be) carefree. But just like anything, it's a new thing that I'm doing that I'm not accustomed to in front of a ton of people. There's a learning curve with it. I'm in it, you're watching it, and we'll see how it develops."