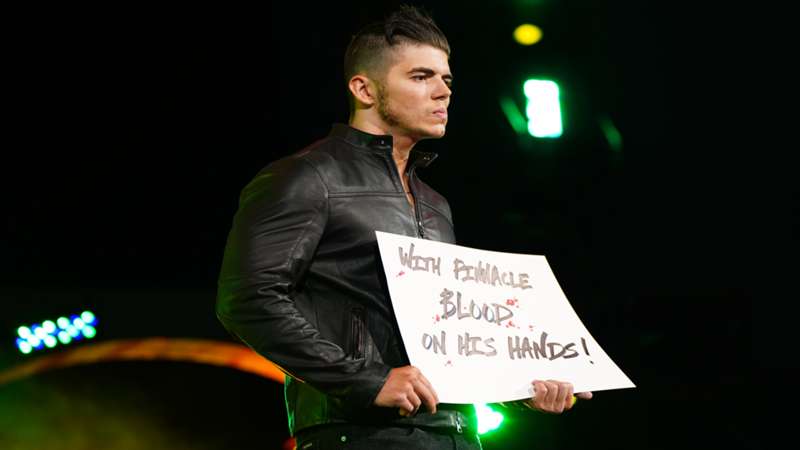 One of pro wrestling's youngest stars prepares for another first in his career.

One of the biggest nights of the year in pro wrestling occurs Wednesday on AEW Dynamite when The Pinnacle meets The Inner Circle in the first-ever Blood and Guts match.

One of the members of The Inner Circle, Sammy Guevara is one pro wrestling's youngest stars. The 27-year-old from Houston has chrisma and an in-ring style that jumps off the television screen.

Ahead of one of the biggest matches of his life, Guevara previews Blood and Guts, where he'd be without Chris Jericho, and being one of the pillars to the future of AEW.

(Editor's note: This interview was edited in length and clarity.)

DAZN: You were in the first match at the first Double or Nothing with Kip Sabian. Then it was the first Dynamite with you and Cody and then the first Stadium Stampede, which was awesome. Now it's the first Blood and Guts match. You ever just take that moment and pinch yourself and wonder how in the hell did I get here?

Sammy Guevara: Occasionally, it will happen. Not too often because I'm always trying to work on what's next, so even this Blood and Guts, it's a history-making match, and it's a big moment in my career. It's the main event on Dynamite. But I'm still thinking about what's next? We got to keep pushing, and we got to keep growing. I'm trying never to get stagnant or content with where I'm at. I'm always trying to push to what's the next big challenge. But occasionally, every now and then, I'll take it in, especially when I got the action figure. There was a little moment right there. I used to go to the store and buy these things, and now I am one of these things. It's was definitely a trip.

DAZN: You talk about how you evolved. Chris (Jericho) talks about you a lot, and he says that he sees "it" in you that maybe some people just don't see right now. Do you feel like you have "it" yet, or do you feel like you still have some room to grow?

SG: I always have room to grow, especially with Chris by my side. Chris has been nothing but the best. He's helped me tremendously since I've come into AEW and putting me in the position that I'm in. I definitely think everybody has room to grow. Anyone who says like, 'I'm the man right now', they're lying, or they're just full of themselves. I definitely think I'm "it". I definitely think I am the "it factor". If you want ratings, I can give it to you all. It'll all come in time. I feel like a lot of us young people, as performers, it's just that waiting game is the hard part. But you got to be patient. I look forward to showing everybody.

DAZN: You look at Chris, and he's 30 years in and still on top of his game, still one of the biggest names in the business. Where do you feel like your career would be if you weren't aligned right now with Chris Jericho on a personal and professional level?

SG: I talked about that with some other guys backstage. I always imagined what I would be doing right now. I don't know, personally, I'm where I want to be, but I'd be, but I know I'd be working my ass off to make sure I'm in a good position. Because that's something with me, I'm never one who just happy to be there, and I'm not trying to just collect the checks because I can go collect a check somewhere else. I'm trying to go and grow the brand. I'm trying to actually prove that I belong. At Fight for the Fallen back in 2019, after the match with Kip Sabian, I remember I was pissed off at that match because I remember Kip had a match with "Hangman" (Adam) Page. I was very happy for Kip. I like Kip.

Him and I have a show together, "The Kip and Sammy Show". But I remember I was like, that's an excellent opportunity for him. Then I got thrown in a six-man tag. and I remember just being the odd man out in that match. The story was Shawn Spears and MJF, which is funny now that they're in a team. But I remember I was just this odd man out. I went into that match so pissed off. If you watch it, I made sure I did my absolute best to stand out. I did everything I could. By the end of it, people were talking about Sammy Guevara in a positive light instead of saying like, 'Who is this random guy'? So I think that would have been my mentality if Chris didn't put me in The Inner Circle, I would have just been me every single time, and I still do it. Every single opportunity, I'm just trying to prove that I belong here and I belong in a top spot.

DAZN: So you talked about MJF, and you'll be in the cage with him and The Pinnacle. Right. Max actually doled out a compliment towards you. I don't know if you've seen this, and I wanted to get your thoughts on this. He talked about the pillars of AEW and what the future is, and he put himself, of course, but he's also said you, Darby (Allin), and Jungle Boy. I imagine you that statement often. What do you think when people make comparisons and make statements like that?

SG: I have to agree with him as much as I don't like the guy. Darby, me, Jungle Boy, and him, I think we're the four pillars of this place. We're the four young guys. I think the company is going to be built around us, and we seize the opportunity. Right now, I know there's a lot of older guys and whatnot. But I feel like as time goes on and we build our names up, we're going take those spots because we're all like-minded, as different as we all are. We're all trying to grow become the best.

DAZN: You haven't said much on the record about the Impact situation. It seems like everyone blew this really out of proportion and made it a bigger deal than it really needed to be. What exactly happened in the situation with you and Impact?

SG: I have to agree as well. I think it got blown way out of proportion. Basically, some stuff was presented to me, I didn't feel like it worked for me and for what Sammy Guevara is, so I declined that. Then they declined to want to use me or whatnot. So that it's totally fine. It was amicable, almost of the just us agreeing like, 'Ok, this is business. Maybe we'll work something out in the future'. Then all of a sudden, it wound up on the dirt sheets, and it blew up. I wish you could have stayed close to the vest. I felt like it wasn't necessary for any of this to become public knowledge because it was done behind doors. So why are we opening the doors for everyone to see? But it is what it is. You can't change what we can't change. I wish Impact nothing but the best. I've said that many times. They got Kenny (Omega) as the champ right now. It seems like they're doing good. They just had a good pay per view it seems like.

DAZN: Have you prepared yourself for this match on Wednesday?

SG: I'll be honest with you, man, I haven't wrestled in a long time. It's been 105 days. There's two parts of me. There's parts of me that wants to go do crazy stuff. Then there's another part of me that's like, 'Hey, man, just enjoy this time off because you're not going to get it forever, especially if we go back on the road weekly'. It's not going to be like this. So I try to look at it from that perspective, so I don't go insane. I've been training, taking bumps, getting ready. I don't know exactly how I can prepare myself 100 percent for this match. I don't have a double cage or a double ring in my disposal. I'm excited for it. I feel like when you see something with a cage, especially the height of our cages, and you see Sammy Guevara in it, something crazy is going to happen.