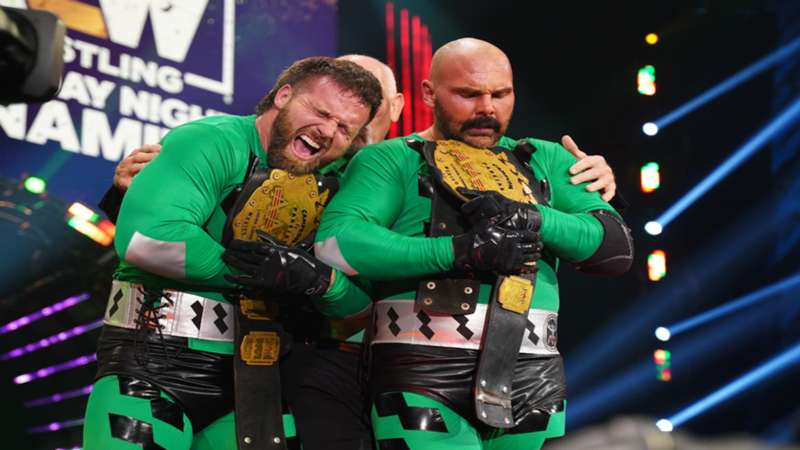 The former AEW Tag Team champions look to regain their titles on Saturday at Full Gear.

FTR had one of the most memorable runs of any tag team in WWE history. They won the NXT, WWE Raw, and WWE Smackdown Tag Team titles. But something was missing for them.

They felt tag team wrestling should be given more shine. Unfortunately for them, WWE Chairman and Owner Vince McMahon has never been the biggest proponent of the tag team product. So Cash Wheeler and Dax Harwood did something about it. They requested their release, and it was granted in April 2020.

On May 27, 2020, Wheeler and Hardwood made their AEW debut and haven't looked back. They won the Tag Team belts at All Out 2020 before losing them to The Young Bucks at Full Gear 2020.

Wheeler and Harwood didn't let the setback deter. The duo joined The Pinnacle led by rising star MJF and feuded with Chris Jericho, Sting, and Darby Allin. They picked up more gold on the October 16 edition of Dynamite as Wheeler and Harwood dressed as luchadores, defeated The Lucha Bros (Penta El Zero and Rey Fenix) to win the AAA straps.

Now, Wheeler and Harwood look to secure more hardware when they battle The Lucha Bros for the AEW Tag Team championships on Saturday at Full Gear.

Ahead of AEW's latest pay-per-view offering, FTR sat down with DAZN News to talk about the last year in AEW, holding the AAA belts, and if company President and CEO Tony Khan gets the credit he deserves for the success of AEW.

DAZN: Full Gear will be the one-year anniversary that you guys lost the belts to The Young Bucks. How would you characterize this last year for you guys?

Dax Harwood: I would say a roller coaster just like life. Life is a roller coaster. I think this last year has been a roller coaster too. I think after losing the match to The Young Bucks at Full Gear and losing the AEW Tag Team championships, we tried to find our footing again. We got intertwined into the Inner Circle and Pinnacle feud. But I think, and I think Cash will agree with me over the last three months, we've hit our stride, and I think we're on the biggest roll we've ever been on.

Cash Wheeler: Yeah, I think it was a reevaluation year for us. It was a reset. We lost at Full Gear last year. That was a pretty low point for us. We put a lot of pride into what we do. We put a lot of pride into being the champions, especially the AEW Tag Team champions, so that hurt. I think we had to take a step back, and we had to just find ourselves and what worked for us from the beginning and kind of reset. We went back to the basics for us, and we just had that chip back on our shoulders. We work best when we're angry. We're best when we're annoyed. I think we've just went out there, and we've gotten back to what made FTR, FTR, and it's been a lot of fun. I think people know that. They're there along with it.

DAZN: You guys have held the WWE and AEW Tag Team titles. How’s holding the AAA titles, and is it any different?

DH: I don't know if it's different. Because our goal is to be the greatest tag team ever. Holding any Tag Team championship is important because you're given the ball, and the promoter or the owner or whatever expects you to deliver. It's just another notch in the belt. That sounds like I'm just saying it is another notch on the belt. But I mean that with the most respect. We're the only tag team in the world that's held WWE NXT, WWE Raw, WWE SmackDown, AEW world, and AAA Tag Team championships. That means a lot to us. That means a lot to our legacy. So we take it very seriously that we're the AAA Tag Team champions.

CW: For me, it is different in the sense that there's a lot more possibilities of what can happen each week. Because with the Forbidden Door being open, there are guys like Samurai Del Sol and Aerostar coming in last week. There's an open challenge. Luchadores can answer from AAA. There are possibilities. If it works out that maybe we get to travel again. We're going to go to Mexico. Who knows where else we could show up. So that uncertainty and suspense of could they or could they not? I think that's something we haven't had with a lot of the reigns. So that's different from me, and I like that.

CW: That spectrum covers from one end to the other is something we take a lot of pride in because we adapt to any opponent, and we still try to find a way to get the absolute best while still obviously winning and being the champions at wherever we want to be, which in this case is going to be the AEW Tag Team champions.

DAZN: Pro wrestling fans can feel the momentum. I'm based in Chicago. I was at All Out, and you could feel it with the (in-ring) debut of (CM) Punk, the debut of Bryan Danielson, the debut of Adam Cole. It's different when we feel it and then when you guys feel it. When did you guys start feeling that momentum switch not just in terms of talent but also with the mainstream public?

CW: I think a lot of the talent if you asked them, will tell you they started feeling that during the pandemic because we had to run so many shows in Daily’s Place, and that’s challenging. You have to be creative, be different, switch things up, and keep things intriguing for the fans to keep them coming back because it's so different without having a full arena full of people screaming. We did a great job of having the most we could with the guidelines in place. But I think it made the company better, and it gave the company time to grow into itself, find its identity, and what works. Once we got back to the live crowds, you can really see that take place because all the seeds were planted during the pandemic. You can tell the momentum was swelling. You can see the backstage atmosphere just had this positivity about it. So when we're back on the road, we're bursting at the seams to get out on the road. No offense to Jacksonville. They were beautiful. But there's just nothing like being on the road every week in front of a new crowd doing something new. I think that's when it really kind of spilled over is when we got back on the road. We have full arenas with crazy debuts and crazy match after crazy match. It’s been great.

DH: But also, I don't think I'm not kissing up to him. I don't think he’ll watch this, so I don't give a damn. But Tony does not get the credit he deserves right now for being, and it's overused but creative genius. He loves professional wrestling. The best thing about this company is that he's not afraid of that word. I think in a few years, people are going to look back and say, ‘Man, he really is smart’. He really knows what he's doing, and he's got a knack for telling stories and putting matches together and the why’s and how’s. He's really great.

DAZN: Do you guys think he gets the credit he deserves from the outside or no?

DH: Oh, absolutely not. Right now, he's a man worth eight or $9 billion, and the people are just regurgitating what they hear online from some of their favorite podcasters that he's a quote-unquote money mark. Furthest from the truth. But he’s got to have money. Vince was a money mark if you think about it. He had to buy a company from his dad, and he had the money. It’s asinine even to think that. He's a huge wrestling fan who was blessed to have the money that he has, and he's trying to put on the best wrestling product in the world, I think. Obviously, I'm biased that he is putting on the best wrestling product we've had in a long time.

CW: I agree. I don't think he gets the credit he deserves, but I think he will. The world just seems like it can be so cynical sometimes, and we talk about it all the time is like an echo chamber. It can be a cynical echo chamber and not all the time sometimes. Some amazing things come from social media, but sometimes it can be a sounding board of negativity. I think right now; people are combating. Some people love it. Some people hate it, and they just want to clash. They want to attach to something so that a large majority of people that are vocal about it, I think, don't even know the full details. They don't look into it. Like you (looking at Harwood) said, they regurgitate information, or they just move the goalposts. They keep saying he can't do something, and he does. Then it's like, ‘Well, it's only because but he can't do this’. It's gonna keep happening, and he's gonna, as far as I am concerned, he's gonna keep delivering, and the company is gonna be around for a long time succeeding. Then finally the respect will come.