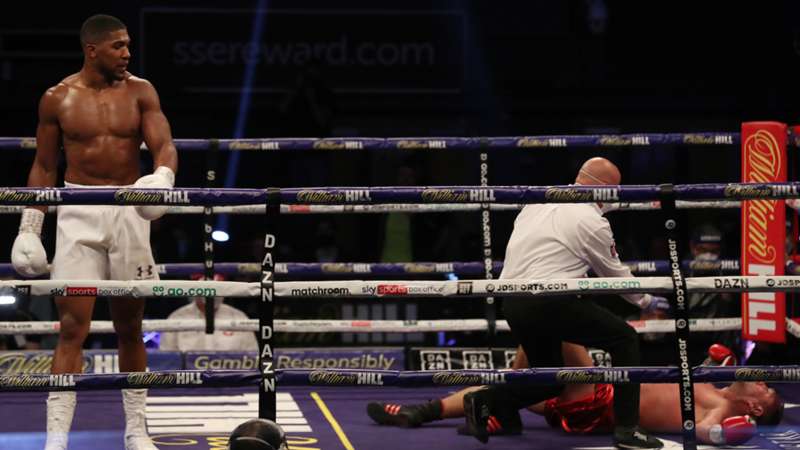 Anthony Joshua opened the door for talks to unify the heavyweight division against Tyson Fury with a dominant performance at the SSE Arena, Wembley.

Anthony Joshua dominated and then floored mandatory challenger Kubrat Pulev to score a ninth-round knockout and retain his WBA, WBO and IBF heavyweight titles at the SSE Arena, Wembley on Saturday.

With 1,000 ticket-buying fans allowed into the building for the first time at a British fight since the COVID-19 pandemic began, Joshua's entrance was met by a huge roar from the partisan crowd which was topped each of the four times he drove his Bulgarian adversary into deep trouble.

After a slow feeling-out process, Joshua exploded in the third round with a series of hard shots that forced Pulev to back away from his opponent, triggering a standing count. "AJ" then added a good old-fashioned knockdown before the round was over for the 10-7 frame.

To the challenger's credit, he was able to shake off the tumultuous stanza and looked to come back into things, only for Joshua's jab, finesse and variety to keep him comfortably at bay. A shutout points win appeared to be on the cards — until Joshua again hit high gear in the ninth.

Stringing together a series of short uppercuts, the champ put Pulev down once more with a pair of hard shots before following up moments later with a right hand for his first win inside the distance since 2018 when he finished off Alexander Povetkin at Wembley Stadium, just down the road from the SSE.

Fans and experts alike spent the buildup to Joshua's first fight since regaining his titles from Andy Ruiz Jr. wondering if he would attempt to once again outbox his foe or perhaps consider a return to his vintage days of dropping bombs on his opponents. The encouraging news was that the champion displayed a slick hybrid of both — perhaps the slickest since he turned pro.

Perhaps surprised Pulev wasn't knocking at his door from the opening bell, like the 39-year-old did the last time he challenged for the world titles against Wladimir Klitschko, AJ kept things cagey in rounds one and two, but did enough to win the rounds with jabs to the head and body.

Round three was when Pulev was introduced to Joshua's power, and the battle-hardened challenger initially responded to the aggression with a wild-eyed grin, only to actually back away from the heat as shot after shot landed and did damage.

Pulev could not flee the round's second wave and he hit the canvas for a knockdown. To his credit, he recovered from what could have easily been a very brief titles challenge. But Joshua refused to let doubt or complacency enter his mind.

The champion took every other round from the fourth until the ninth, when "AJ" again decided it was time to crank up the heat and test Pulev's mettle. Though the Bulgarian was allowed to continue after the third count of the bout, he was soon on the canvas again and did not get back up.

Joshua moves to 24-1 with his 22nd career knockout. Pulev, meanwhile, has suffered only his second professional loss and is now 28-2 with 14 wins inside the distance.

Lawrence Okolie looked like a new, improved and far more dangerous fighter in the chief support bout of the evening, as he obliterated late replacement opponent Nikodem Jezewski with three knockdowns in less than two rounds of action before the official mercifully called it off. An organ-displacing body shot brought the previously-undefeated Jezewski to a knee early in the first, and knockdown number two really should have triggered the referee stoppage before either man could warm their corner stools.

Another vicious shot earned Okolie a swift treble of scoring strikes in the second and though the visibly-hurt Polish fighter staggered up at the count of nine, this time around the referee knew better than to let the slaughter continue.

Okolie was originally set to fight Jezewski’s compatriot Krzysztof Glowacki for the vacant WBO cruiserweight title, but the Rio 2016 Olympian is surely destined for a world title opportunity in the first half of 2021 after such an emphatic showing under new trainer Shane McGuigan.

Hughie Fury (25-3, 14 KOs) sustained a nasty cut above his left eye in the fourth round of his must-win bout with seasoned Polish heavyweight Mariusz Wach (36-7, 19 KOs), but thanks to the stellar work of cornerman Kerry Kayes was able to soldier on and cruise to victory. Fury shut Wach out on two of the three scorecards, 100-90, and claimed the other 99-91 for a unanimous decision win which saw the Brit settle into a stylish groove after the accidental clash of heads that opened him up.

The 26-year-old started off with a clear intent of a quick stoppage and a statement-making performance, but walked onto far too many shots before adjusting his gameplan to far more success. Despite a late Fury flurry in the closing stages, the rugged Wach held on to settle for a scorecards defeat.

Martin Bakole (16-1, 12 KOs) bolstered his efforts to muscle in on the world title scene at the maximum weight class with a 10-round unanimous decision over Sergey Kuzmin (15-2, 11 KOs) to capture the WBC International heavyweight title. The three ringside judges had it at 98-92, 97-93 and 96-94 in favour of Bakole, who called out the only man to beat him so far, Michael Hunter, for a rematch in a post-fight interview.

Here's how the entire Joshua vs. Pulev card went.

Joshua knocks out Pulev in Round Nine!

facebook twitter whatsapp
The champion finesses his way past an urgent Pulev, strings together a few short uppercuts and then drops Pulev for a third time in the fight. And then a fourth! With seconds left in round nine, the official counts Pulev down! Joshua wins via ninth-round KO!

facebook twitter whatsapp
AJ returns to the body jab he has employed sporadically thus far, but this time sticks with it to put Pulev's latest attempt to show some initiative on a leash. Peter Fury is here, and he told the Sky broadcast team he thinks AJ should have been more aggressive and taken up residence in the centre of the ring to get this finished by now, but we're heading towards a shut-out at this rate nonetheless.

facebook twitter whatsapp
AJ re-introduces the straight right/left hook combo a couple of times, connects with a nice uppercut in the clinch and later goes to work with planted feet on the hunched-up challenger. Pulev is soaking it up and still smiling, however. He may well drag this the whole 12 after all, but it's one-way traffic for now. Couple of nice shots from Kubrat late on but it's 70-61 Joshua for me.

facebook twitter whatsapp
Now past the round where he fell in his last world title tilt against Wlad Klitschko, Pulev is coming forward with more frequency now, knowing he needs to be pro-active from here on out. Joshua, nonetheless, evades most of his efforts and has a smile on his face as he initiates counter-jab mode. 60-52 Joshua.

facebook twitter whatsapp
Another big right from Joshua late in the round, but he can't follow up this time as he did in the third. Pulev then lands his best shot of the fight and forces AJ to clinch. Joshua really needs to be wary of a second wind from the rugged Bulgarian. He has a wide points lead and would be best served letting Pulev get desperate to claw back. 50-43 Joshua.

facebook twitter whatsapp
There was a swing or two between the fighters after that third round bell, too. The fourth is more subdued than that massive round three, which is good news for Pulev. However he'll be aware that he has to offer something now otherwise it's Sophie's Choice between an easy AJ points win or an AJ knockout. 40-34 Joshua.

facebook twitter whatsapp
Joshua explodes halfway through the round after connecting with a massive right! Shot after shot and though Pulev tries to laugh it off, he soon walks away from AJ and is given a count by the official. AJ then scores another knockdown! That's a 10-7 round but Pulev isn't done just yet.

facebook twitter whatsapp
Joshua is the first to really unload to a huge roar from the crowd, but it's all to the gloves of Pulev, who laughs it off. The Bulgarian makes his first real efforts to come after the champ but eats some solid shots each time. Pulev mouths off to Joshua at the end of the three minutes and the referee has to frogmarch AJ back to his corner. Some of that smoke we saw at the weigh-in... 20-18 Joshua so far.

facebook twitter whatsapp
Not much in the first round. AJ standing off his challenger, wondering why he isn't all-guns blazing like he was in 2014 vs Klitschko. There's a good left from Pulev in there, but Joshua's opening gambit of jabs earn him a slender 10-9.

Sweet Caroline has played in the SSE Arena...

...you know what that means.

Joshua. Pulev. The WBA, WBO and IBF world heavyweight titles. It's next!

Floyd Mayweather is in the building

facebook twitter whatsapp
IT'S OVER! Okolie wastes no time tearing through replacement opponent Jezewski, putting him down in the first with an organ-displacing body shot and the Polish fighter somehow weathered a second knockdown before the opening stanza concluded. A third knockdown in total was scored in Round Two and though Jezewski somehow made it up at nine, the official was never going to let him back in.

facebook twitter whatsapp
Lawrence Okolie and Nikodem Jezewski embark on ringwalks for our final bout before Anthony Joshua and Kubrat Pulev headline the show. Jezewski is unbeaten like the Olympian, and stepped into this at late notice when Krzysztof Glowacki tested positive for COVID-19.

facebook twitter whatsapp
Fury looked for a checkout right at the death there, raining down shots on Wach but the rugged Pole was able to hear the final bell once again in his long career. The judges have it 100-90, 100-90 and 99-91 for a unanimous decision win for Fury!

facebook twitter whatsapp
Hughie Fury's cutman Kerry Kayes has worked his magic on that laceration and it looks like we are going to get all 10 rounds here. For the record, whether it was stopped for blood or not, Fury is set for a comfortable decision win here. He's settled into a happy medium between boxing with style and striking with intent and though Wach has been able to soak it all up, this should be just what Hughie needed to hit the soft reset on his world title aspirations.

A second check on the cut

facebook twitter whatsapp
At the top of Round 6, the ref wants to see Hughie's cut once more. He lets the fight continue. If at any stage this bout is stopped due to the cut, we go to the scorecards. I've got Fury ahead 4-1 and commentary are also confident Hughie would take it if it ended right now.