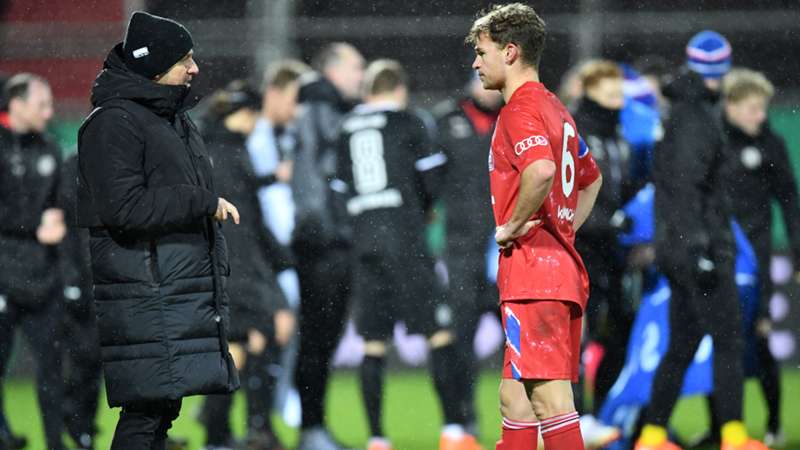 The German football giants will not be involved in the last 16 of their domestic cup competition for the first time in over 20 years.

There was a big upset in the DFB-Pokal — the German equivalent of the FA Cup — on Wednesday when defending cup holders Bayern Munich, the nation's biggest and most successful club, were dumped out in the second round by Bundesliga 2 side Holstein Kiel via penalties.

Goals from Serge Gnabry and Leroy Sane gave the heavy favourites the lead on two occasions, only to be pegged back twice by the home side including a dramatic stoppage-time equaliser by Hauke Wahl.

Bayern won "the treble" in 2020, lifting a staggering eighth straight Bundesliga title as well as the Pokal and the Champions League. This season, the battle for the league title looks to be more competitive than usual, and now the Bavarians are out of the cup in unexpected fashion.

However Bayern coach Hansi Flick said at the post-match press conference that the players must brush the humbling result off and move on in their search for more trophies.

"Their first goal was the same pattern as the last few games. We have to close gaps in the centre and we didn’t do that. For their second goal, we didn’t have enough men inside the box and didn’t defend one versus one.

“It was a cup fight that meant the end of the cup journey for us,” added Flick. “We must get over it because we have a lot of things to do.

“We have to work on having better defensive compactness, apply more pressure on the ball carrier and secure our backline. We have to get over this defeat now and work well in training on Friday and Saturday.”