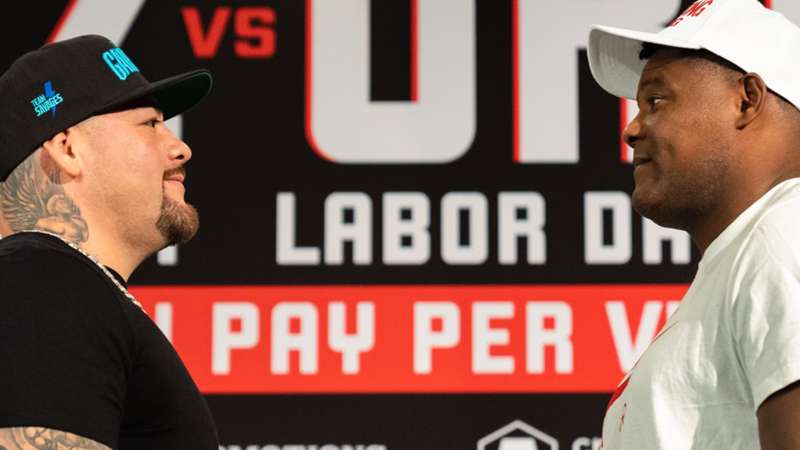 (Ryan Hafey/ Premier Boxing Champions)
Check for Canelo vs. GGG 3 on DAZN in your country

What the former unified heavyweight champion of the world and ex title challenger must do to be successful in this pivotal matchup.

Both Andy Ruiz Jr. and Luis Ortiz had to overcome adversity in their last fights. Ruiz was dropped and staggered before defeating Chris Arreola by unanimous decision in May 2021 and Ortiz rebounded from two knockdowns to stop Charles Martin this past January.

Having learned from those experiences, Ruiz, the former unified world heavyweight champion, takes on top contender Ortiz at the Crypto.com Arena in Los Angeles, and live on pay-per-view, Sunday night. With this being a WBC title eliminator, the winner of this clash will put himself in position for a shot to become champion.

Will Ruiz use his quick hands to guide him to a big win? Or will "King Kong" land the thumping blow to inch himself closer to the crown?

With the stakes so high, DAZN lists the keys to victory for both fighters.

Luis Ortiz is a heavier-handed power puncher than many of his fellow heavyweights. But the Cuban has slick, deceptive boxing skills, too. He showed Deontay Wilder a taste of both his sweet science skills and brutal power in their two bouts and should look to do the same against Andy Ruiz, considering he has a four-inch reach advantage. In particular, that lead left hand step-in power jab and a counter left should be deployed against Ruiz and often.

Rely on compact punches in the clinch

One way to hinder Ruiz’s vaunted quick hands is to tie him up in the clinch. There, Ortiz could opt to lean on Ruiz in attempt to sap his energy. But he’s got to unleash compact, yet thudding blows while in the clinch, too. Short shots to the head and body in the clinch could go long ways to slow Ruiz down a bit and possibly even make him drop his hands slightly enough for “King Kong” to land the thumping blow that drops the “Destroyer.”

There was a moment in the second round of Ruiz’s May 2021 bout against Chris Arreola where he was posturing for inside position and got careless. Instead of getting to his desired spot within the phone booth, Ruiz exposed the left side of his chin and walked right into an overhand right that deposited the former champ onto a knee. Moments later and Arreola repeatedly found success with an overhand counter left that staggered Ruiz. Although the “Destroyer” would hang on to win by unanimous decision, Arreola had major pockets of success that Ortiz should take a page from, especially if he senses similar careless and vulnerable footwork from Ruiz. Those moments would be the opportune time for Ortiz to unload overhand shots, especially that overhand counter left.

Use quick hands toward combinations

Ruiz demonstrated just how quick his hands are on the grand stage that saw him become unified world heavyweight champion in a stunning upset of Anthony Joshua back in June 2019 at Madison Square Garden. However, those quick hands have been a staple trait throughout Ruiz’s career and he will look to use them against Ortiz, who at six-foot-four is there to be hit. That hand speed is what separates Ruiz from many other heavyweights. Ruiz’s left-right combination is electric and he should look to blast Ortiz with it right up the middle whenever possible.

Ortiz showed his age against Charles Martin back in January, getting dropped by the American twice before grinding out a sixth-round TKO. At 32-years-old, Ruiz has to make Ortiz, 43, work. Whether that means feinting to assert his own offense or slipping Ortiz’s massive shots, Ruiz has to make “King Kong” move. The longer this fight goes, the better it bodes for the younger fighter in Ruiz. Plus, prolonging this fight could give Ruiz the opportunity to unleash the stinging combination needed to stop Ortiz in his tracks.

Ruiz can’t afford to let his guard down, while vying for position with “King Kong” like he did against Arreola. Doing so could leave him open to an overhand right or crushing counter left from the southpaw, spelling lights out. Ruiz has to prove that he’s learned from those lapses and keep his guard airtight, so he can deliver crisp, stinging shots and not get hit with the detonating, crunching blows of Ortiz.