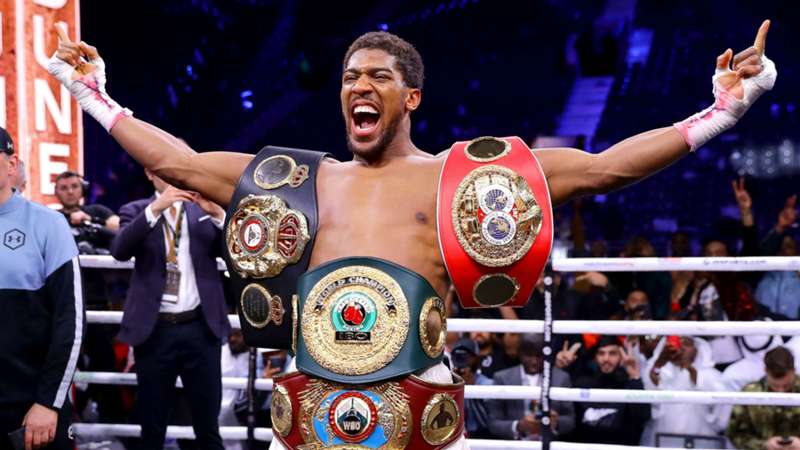 However, even if Joshua retains his titles at Wembley's SSE Arena on Dec. 12, there is another matter to be negotiated before he and WBC champion Fury can attempt to decide who will be the undisputed champion of the division — mandatory WBO challenger Oleksandr Usyk.

Usyk, who fought on Halloween night with a decision win over Dereck Chisora, has indicated that he will be insisting on his world title shot in early 2021. That means if Joshua and Fury sign a contract for around that timeframe after tentatively agreeing to financial terms earlier this year, the Ukrainian will be able to prompt the WBO into stripping their belt from Joshua and keeping the weight class divided.

Joshua, who sat down with DAZN's Chris Mannix just days before he returns to the ring for the first time in a year to face Pulev, said he believes it would be in everyone's best intrerests if Usyk was told by the WBO to wait until the division was completely unified, then became the first man to challenge the new undisputed champion.

"In my heart of hearts, I don’t want to drop a belt," Joshua told Mannix. "I’ll fight Usyk first if I have to. But I think the governing body should overrule a mandatory if they have a fight for an undisputed champion, which they could.

"If they were keen on this unification fight they [the WBO] would say to Usyk ‘right, we have this undisputed title fight coming up which overrules a mandatory challenge’.

"What I mean is that I’ve worked hard to put together fights towards an undisputed heavyweight champion over the last few years, except this year which has obviously been a bit up and down.

"But if I can get past Pulev, hopefully me and Fury can finally get it on in 2021, if the governing bodies are willing to override the mandatory positions in order to get one undisputed heavyweight champion of the world."

Joshua and promoter Eddie Hearn already have first-hand experience of how inflexible mandatory challenges can be, after it was revealed that Pulev and his team have already stood their legal ground to ensure the Londoner could not move on to the Fury fight before Pulev's title tilt.

The topic of bringing Joshua vs. Fury forward came about when the planned trilogy between "The Gipsy King" and Deontay Wilder fell through. Promoter Bob Arum recently said he feels Fury-Wilder III could still happen in 2021, but that the American no longer has a contractual right to a rematch thanks to that clause expiring in October.

You can watch the full Joshua interview with Mannix on DAZN.

Joshua vs. Pulev airs live Saturday Dec. 12 on Sky Sports Box Office in the U.K. and Ireland, and on DAZN elsewhere including the U.S. with a DAZN subscription.