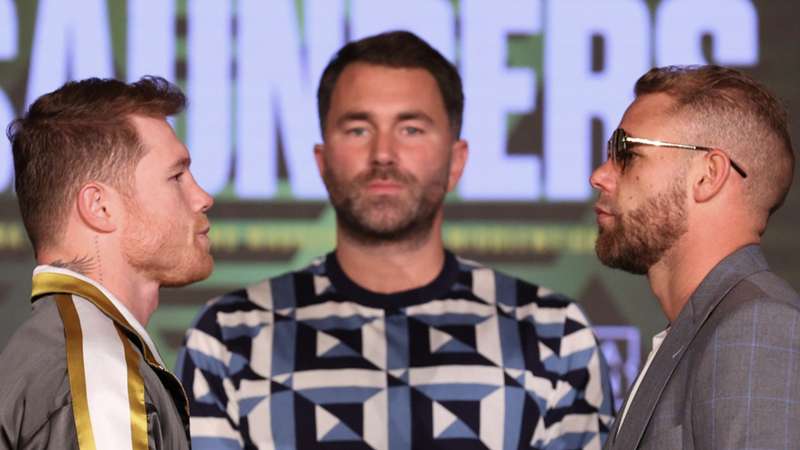 How the super middleweight world champions stack up ahead of their unification fight Saturday night at AT&T Stadium in Arlington and live on DAZN.

The tense face-off between Saul 'Canelo' Alvarez and Billy Joe Saunders on Thursday showed glimpses of how the super middleweight world champions stack up ahead of their unification fight Saturday night. For example, Saunders has a slight height and reach advantage. Whether either play a hand in the outcome remain to be seen.

Naturally, both Alvarez and Saunders have spent this week sizing each other up, before they get into the ring at AT&T Stadium in Arlington, Tex. to decide things once and for all. For starters, Alvarez used Thursday's final fight press conference to dismantle any notion that Saunders will present a complex challenge for him to solve in the ring as fellow southpaw Erislandy Lara did back in 2014. (Alvarez defeated Lara via a closely-contested split decision).

"He's a great fighter, he has a lot of ability and he's also a southpaw," Canelo said of Saunders, "but I'm not the same fighter of six or seven years ago and this Saturday I will show that."

Alvarez added: "I've been involved in a lot of big fights and this is just another day at the office. Boxing is my life and I come here to win."

To that statement, Saunders fired off that he has traits that can't be qualified on the tale of the tape, adding that those traits have been lacking against past Canelo opponents but will show up in a huge way Saturday night.

"We haven't had the heart and soul and the IQ that I'll bring to the table and ring on Saturday night to win," Saunders stated.

While we'll see how Saunders' heart and boxing IQ show up this weekend, there is value at looking at the tale of the tape. Let's take a look at how these two world champs stack up on paper.

One can see that Alvarez and Saunders are close in age, with the British fighter owning two inches of height and a 1/2 inch of reach advantage over the Mexican boxing sensation. While there's not much to read into there, what we can sink our teeth into is Canelo's 58 total fights to Saunders' 30 and 37 knockouts to Saunders' 14. Now, Saunders has never billed himself as possessing knockout power, leaning on his pure boxing ability instead, but 28 more pro fights gives Canelo a sizeable experience edge.

Furthermore, Canelo has been tested in the ring, whether it was being on the receiving end of a boxing lesson from Floyd Mayweather Jr. in 2013 or having two wars with rival Gennadiy Golovkin in 2017 and 2018. And he's come out better from those experiences. Saunders hasn't faced a quality of opponent quite of that caliber nor of some of Canelo's other past opponents as well. Lara, Sergey Kovalev, Daniel Jacobs and Miguel Cotto are a few that come to mind.

So, when Saunders says that he's been waiting a lifetime to make a career-defining statement, now is his chance.

Everything on paper with this tale of the tape and beyond comes to a head Saturday night, when Canelo clashes with Saunders, live on DAZN.