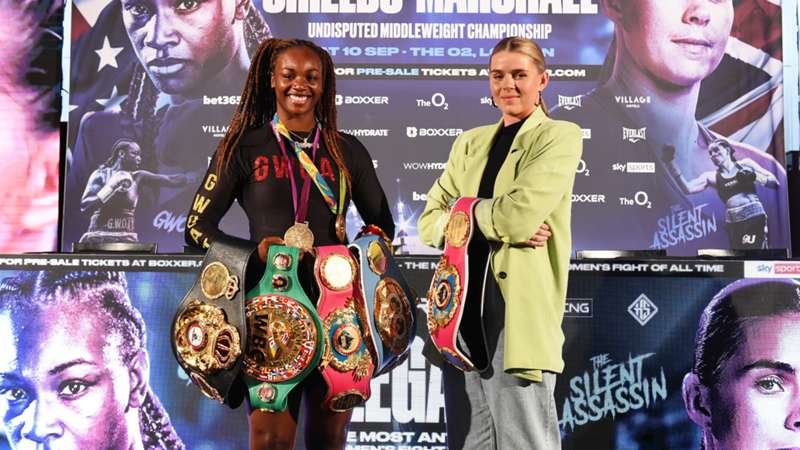 What both fighters must do to be successful in this grudge match for all four middleweight titles Saturday in London.

Savannah Marshall has been bragging about her 2012 victory over Claressa Shields in the amateurs off and on for 10 years. And Shields is tired of it.

Shields will look to banish any notion that Marshall has her figured out Saturday at the O2 Arena in London, where she'll put her WBA, WBC, and IBF middleweight titles on the line against Marshall's WBO strap in a bout for undisputed glory.

With the grudge match stakes at an all-time high, DAZN lists the keys to victory for both Marshall and Shields.

It has been a long time since Savannah Marshall defeated Claressa Shields in the amateurs. Since that 2012 loss, Shields has shown a penchant in the professional ranks of bullying opponents with a blend of sharp boxing and piercing power. That’s the Shields that Marshall will be up against Saturday. Subsequently, the taller Marshall should look to box, jab Shields, and move. Her ability to box and touch Shields with the jab, making the GWOAT constantly move in the process, could go long ways in this grudge match.

Whether it be piecing together powerful combinations or landing that one defining, significant blow, Marshall must make Shields respect her power early. Doing so could change the natue of the fight and possibly even put Shields on the back foot if Marshall can do it effectively.

Prove she could stand in the pocket with Shields

Part of Marshall making Shields respect her power early could come down to her ability and willingness to stand in the pocket and bang with the three-division world champion and two-time undisputed crown holder. Doing so will be a sort of confirmation to what Marshall told Shields in their final fight press conference earlier in the week: “I said I’m going to hurt you and I will.” When Shields pressed Marshall to make a knockout prediction, the British fighter slyly replied, “We’ll see when you wake up on the canvas.” The stinging words sound good. Now, it’s time for Marshall to back them up head-to-head with Shields in the phone booth.

Shields has shown a growing ability to box sharply and assert her power jab to wilt opponents. Establishing slick and sharp boxing early, especially that power jab, would empower Shields to let Marshall know that this isn’t the amateurs and that the Brit has a long night ahead.

Prodding Marshall with a power jab would also allow Shields to start walking the taller fighter down and pave the way for the bullying to begin. We saw Shields do this against a taller Christina Hammer, as she battered the five-foot-11 fighter en route to a unanimous decision to be crowned undisputed middleweight champion of the world back in April 2019. Marshall stands a half-inch taller than Hammer. Shields’s ability to assert the jab could put Marshall on her back foot. Not to mention open up lanes and angles for the GWOAT to walk and eventually mow Marshall down.

All fight week long we’ve heard how much it irks Shields that Marshall still references her 2012 amateur victory over her. A win on the cards would put that talk to rest, disbarring Marshall from holding the win over Shields’s head any longer. However, a knockout victory would eviscerate it, period.

Shields might not need a knockout at all, as her sharp boxing and power could prove to be enough. But if she senses that Marshall is willing to bang with her at any point of this fight, going for and getting a KO via punch placement could be amongst Shields’s most savory and satisfying highlights.