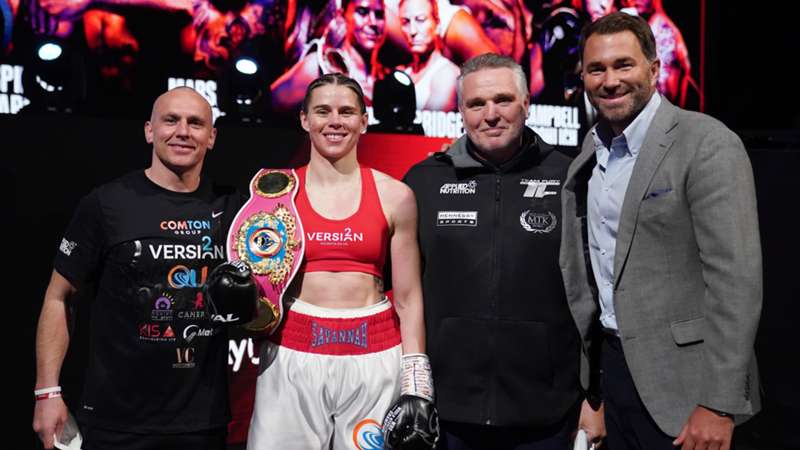 Savannah Marshall's quick finish of late replacement Maria Lindberg was expected, but will the fight everybody wants finally be next for Marshall?

Sweden's Lindberg, 44, was a last-minute replacement for Belgian Femke Hermans but although it wasn't the exact level of opponent Marshall hoped to test herself against in her first defence, she came through the challenge comfortably.

A rescheduled bout with Hermans appeals, but the real fight people want in the division is Marshall vs. Shields in what would be a rematch of their infamous amateur encounter nine years ago, the American's only defeat at any level to date.

Hearn said after Marshall's win that the fight is being negotiated, and that he doesn't think Shields would go the distance against Savannah's punch power.

“We’re making good progress on a Shields fight," Hearn reported. "Her teams know how dangerous the fight is and they want a lot of money, but I’m prepared to pay them," Hearn said.

“There is no way Shields goes ten rounds with Savannah Marshall. Savannah is the only girl to beat Shields in her entire life. She beat her in the amateurs and she will do in the professionals.

“Shields is one of the top three female pound-for-pound fighters in the world, but she is wide open and can’t stand up to Savannah’s power. Savannah is the hardest pound-for-pound puncher in women’s boxing. Marshall vs. Shields is superfight that can headline in the USA or England, and I will do everything to try and make it.”

Shields then offered her thoughts on Marshall vs. Lindberg and the prospect of facing the WBO champ herself in a video on her YouTube channel.

"Look, there's levels to this," claimed Shields. "Marshall cannot f— with me. She's too slow, she don't understand distance, I, I, I could give you a list.

"After the fight she's calling me out and Eddie's saying all this adorable weird things, but Savannah Marshall doesn't possess the skills. Strength is not gonna play a factor. I'm a natural 168-pounder."