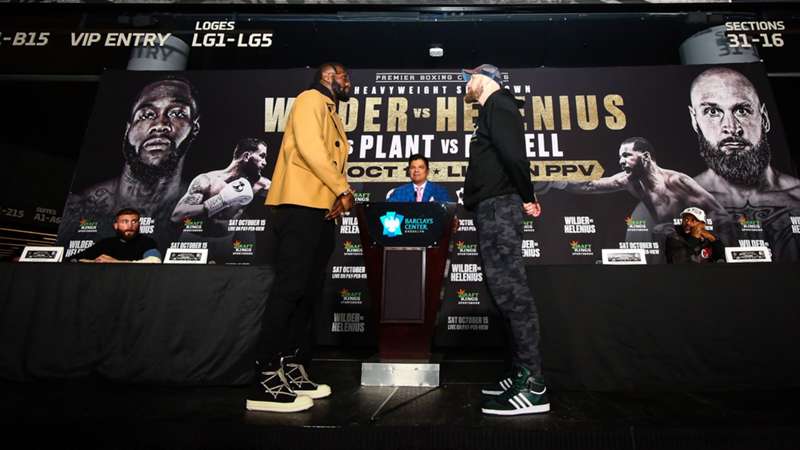 What the former WBC titleholder and rugged contender must do to be successful in their heavyweight fight.

An impactful win and “The Bronze Bomber” could find himself in title contention next. With the stakes this high, DAZN lists the keys to victory for the former WBC heavyweight champion and the rugged Helenius ahead of their tilt.

Tie Wilder up, look for right hand and uppercut inside

It’s rare that the 6’6½” Helenius gives up height and reach against an opponent but that’s the situation he’ll walk into against his former sparring mate Deontay Wilder. To pull within that four-inch reach disadvantage, Helenius should look to muscle and tie Wilder up to get inside. Then, once he secures that inside position, Helenius could look to unload with his solid right hand and uppercut. Both weapons took their toll on Adam Kownacki in their pair of fights. Albeit that was against a shorter, less explosive opponent than Wilder but still noteworthy.

Early deposits to the body could pay dividends for Helenius as long as he commits to the attack. With Wilder standing six-foot-seven, there’s plenty of body to hit for “The Nordic Nightmare.” Attacking the body could serve as a tool to make this a lot tougher of a fight than Wilder anticipates as well. And if Helenius can do it enough, it could also represent a key for him attempting what would be a mammoth upset.

Avoid Wilder’s right at all costs

This one is easier said than done, but Helenius must avoid that clubbing right hand of Wilder’s. As Wilder’s former sparring partner, Helenius has probably felt the effects of that massive right detonating. Hopefully, for his sake, he has learned solutions for how to evade it as well.

Jab to the body early

Wilder showed a commitment to the body of Tyson Fury early into their trilogy bout with the six-foot-seven former WBC titleholder getting low to target the “Gypsy King.” That body attack helped pave the way for an ultra-competitive fight that had Wilder dropping Fury twice before eventually being knocked out. Continuing that jab to the body could work toward softening up Helenius’s core and more importantly lowering his arms enough where Wilder can blast him with the right hand.

Until proven otherwise, Deontay Wilder’s right hand is still the most dangerous weapon in boxing. His opponents all expect it, yet turn into mush when hit with it. And with all due respect to Helenius, he shouldn’t be any different. Wilder should look to lightly pepper Helenius with almost a distraction of a left jab, before blasting him the other way with that raucous right hand. Doing that with speed should be a recipe for disaster for Helenius and much-needed confidence boost for Wilder.

Coming back from two debilitating knockout losses isn’t easy. And Wilder is going to aim to please the Brooklyn, New York crowd and many more watching the pay-per-view live. However, in doing so, he should not press because he doesn’t want to find himself vulnerable to offense he doesn’t expect from Helenius. “The Bronze Bomber” being himself should be enough to get his hand raised in victory and prove to himself that he’s still that much of a force in the heavyweight division. Staying composed is the key to this.