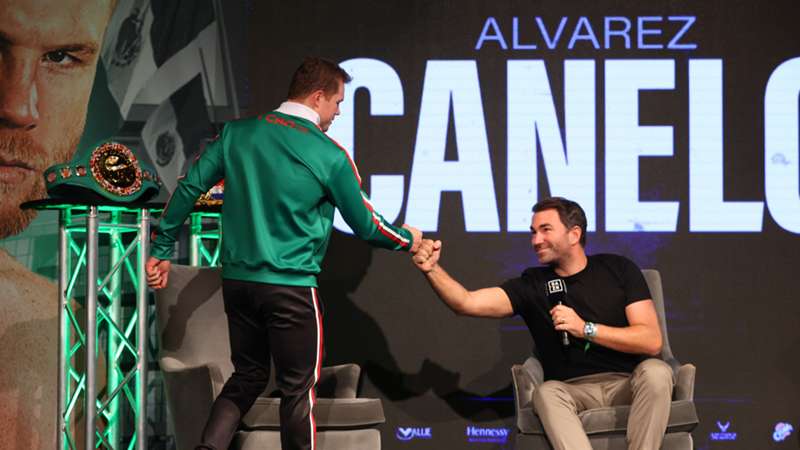 Exclusive: The Matchroom boss believes it could be time for British fighters to start upsetting Mexican fighters in their own back yard, rather than the other way around.

After years of bringing Mexican boxers onto British boxing cards and watching some of them achieve fantastic wins against home town favourites, Matchroom Boxing boss Eddie Hearn has proclaimed that a role reversal could soon be on the cards.

Matchroom, DAZN and Canelo Promotions announced Thursday that a brand new four-part series of live boxing events will be held in Mexico as part of a continued global expansion, which includes last week’s game-changing announcement that Matchroom will air on the sports streaming service in the UK from July.

Hearn told me in a recent exclusive interview that not only will the series, which begins June 26 with a WBC flyweight title main event of champion Julio Cesar Martinez defending against Joel Cordova, shine a spotlight on a host of untapped Mexican fighting talent, but it could lead to up-and-coming British fighters turning the tables on them and challenging home hopes on shows over there.

“We’ve seen a lot of great action pitting Mexican boxers against British boxers, and it’s been a bit of a disaster, really,” said Hearn of the recent run of UK vs. Mexico fights, which have mostly gone in favour of the Mexican stars.

“Mauricio Lara knocked out Josh Warrington in a huge upset, then Gabriel Valenzuela beat Robbie Davies Jr in what was a tougher fight in terms of odds. More recently, James Tennyson was knocked out by Jovanni Straffon in the first round.

“There have been a few decent victories for Brits against Mexicans along the way, which people won’t talk about as much. Jordan Gill beat Cesar Juarez and Kash Farooq got a good win. But the Mexican adventure ramps up in the next few weeks and months.

“The partnership with Canelo and Eddy Reynoso to bring big time boxing back to Mexico will see us run four events per year, all world championship class events. We can’t wait.

“One thing we love about the British fight fans is their passion and their love of the sport and for a night out at the fights. The Mexican fans are on exactly the same wavelength, maybe even a little bit crazier.

“I feel that there is so much talent in Mexico. Look at Mauricio Lara, a guy that came from nowhere. After that fight, I spoke to people in Mexico about him and said ‘wow, where did he come from?’. They said ‘Eddie, we have thousands of Mauricio Laras.’

“These shows in Mexico mean major televised events are returning to the country. Young fighters get the chance to progress and champions such as Julio Cesar Martinez, who will be on the first show, get the chance to fight at home.

“Mexican fighters always have to go on the road when they get to a certain level. We’ve given Mexican boxers loads of opportunities to fight on UK cards, and now it’s time for our British guys to get opportunities over there.

“You will see UK fighters making the trip to appear on those Mexican cards with the opportunity to upset the apple cart themselves. Maybe one day we could see a series of UK vs. Mexico fights, Ashes-style, for bragging rights.

“But in the short term you’re going to see a lot of Brits challenging Mexicans in their own back yard.”

The four-show series in Mexico, put together by Matchroom Boxing, Canelo Promotions and DAZN, begins on June 26 with a main event of Martinez vs. Cordova for the WBC flyweight title. For more information on the series, click here.