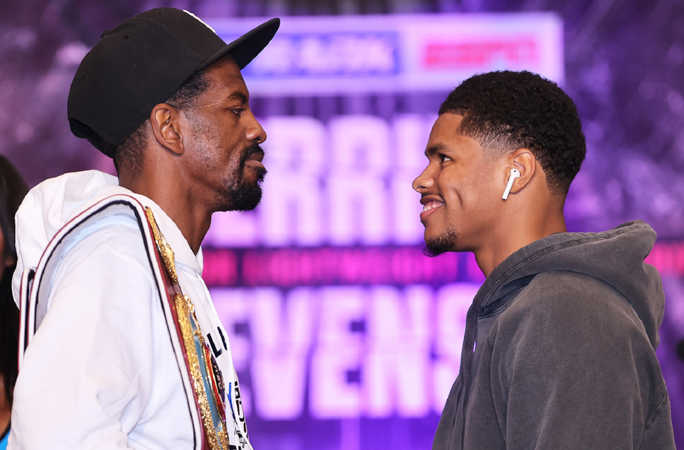 All the details to the WBO super featherweight title clash.

Things got heated at Thursday's press conference when Stevenson twice touched Herring's WBO belt. Herring pushed the 2016 Olympic silver medalist for doing that. Both fight teams intervened before it got more physical.

Then after Herring and Stevenson made weight at Friday's weigh-in to make the fight official, they had a heated face-to-face staredown. Everything appeared to be fine until Stevenson decided to tug at the title again. Herring pushed the hand away and people jumped on the stage before anything else happened.

All of the talking is done 🚫🗣@JamelHerring and @ShakurStevenson settle the score in the ring tomorrow night.#HerringStevenson | Saturday | 10:30 PM ET | ESPN pic.twitter.com/4zRhkRcEfz

The score gets settled on Saturday night.

Here are all the details to Herring vs. Stevenson.

Herring weighed in at 129.8 pounds, while Stevenson came in at 130 pounds on the scale.

Stevenson enters the fight as the massive favorite at -700 odds on BetMGM to win the WBO title, meaning you'd have to bet $700 to win $100 if he beats Herring. The champion is listed as the +550 underdog, spelling that a $100 wager can net you $550 if he hands Stevenson his first loss and retains his WBO title.

When is Jamel Herring vs. Shakur Stevenson?