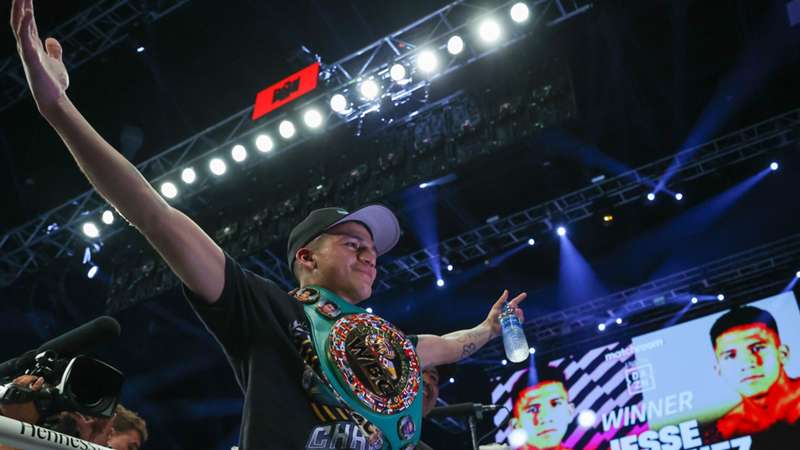 Melina Pizano/Matchroom
Check for Canelo vs. GGG 3 on DAZN in your country

Jesse Rodriguez didn’t deliver a scintillating knockout this time around.

But he produced more than enough “Bam” against Israel Gonzalez to get another victory and retain his WBC junior bantamweight title Saturday night at the T-Mobile Arena in Las Vegas, and live on DAZN pay-per-view. Judges scored it 118-109, 117-110, and 114-113 for Rodriguez, who grew his fighting profile in the co-main event to Canelo Alvarez-Gennadiy Golovkin 3.

Despite Gonzalez’s valiant effort, Rodriguez outclassed him with sharper, harder output. "Bam" had a point deducted in the eighth round due to a low blow. Ironically, referee Kenny Bayless indicated that another low blow in the 11th was on the belt line and didn’t deduct a point nor inexplicably register a count despite dropping Gonzalez with the shot, though it looked lower than the one Rodriguez was penalized for in the eighth.

Still, Rodriguez's performance was enough to grant him his third victory of 2022, inching him closer to possibly earning Fighter of the Year honors.

Gabe Rosado can be a tough out. Not for Ali Akhmedov.

The Kazakh super middleweight picked up his third straight victory behind a dominant unanimous decision victory over the scrappy journeyman at the T-Mobile Arena in Las Vegas on Saturday night and live on DAZN pay-per-view. All three judges scored it 100-90 for Akhmedov, who shined bright on the Canelo Alvarez-Gennadiy Golovkin 3 stage.

Akhmedov was skilled, yet responsible in making Rosado feel his power with quick, thudding combinations before making sure to step back into range. Doing that prevented Rosado from dragging Ahkmedov into a slugfest in the phone booth.

A step up in competition for Akhmedov at 168 pounds seems certain courtesy of his latest efficient performance.