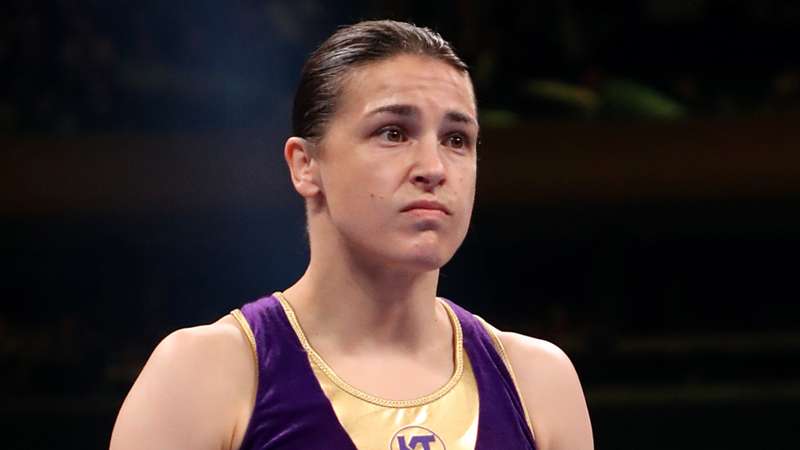 The mega fight, which has been rescheduled for July 4, will also be for Taylor's undisputed world lightweight titles.

Claressa Shields and Laila Ali possibly fighting in the near future seems to be grabbing the most headlines when it comes to women's boxing.

But Katie Taylor has reason to believe that her upcoming mega bout with Amanda Serrano is second to none.

"This is literally the best fighting the best," Taylor told Matchroom Boxing USA president Eddie Hearn during an Instagram Live chat earlier in the week. "These are the fights that everyone wants to see, so it's a very, very exciting fight — not just for women's boxing, but boxing as a whole. This is a fight that people want to see."

Taylor was gearing up to put her undisputed lightweight crown on the line against Serrano on May 2 at the Manchester Arena in Manchester, England. However, the ongoing coronavirus global pandemic has pushed back that mega fight to July 4.

If the bout does indeed take place on that day, Taylor says more than her IBF, WBA, WBC and WBO titles will be at stake.

The 33-year-old Taylor (15-0, 6 KOs) became the third woman in boxing history to become an undisputed world champion by scoring a controversial majority decision over Delfine Persoon last June. She then added the WBO super lightweight title to her collection of hardware with a unanimous decision over Christina Linardatou in November. Meanwhile, the 31-year-old Serrano (38-1-1, 28 KOs) stands as the only seven-division world champion in women's boxing history, having last fought in January, when she delivered a third-round TKO of Simone Aparecida Da Silva. Overall, Manny Pacquiao is boxing's lone eight-division world champ.

All the aforementioned details being considered, one could see why Taylor says the fight will decide the pound-for-pound best in women's boxing. Beyond that, it's personal between the two, as Taylor shut out Serrano's older sister, Cindy Serrano, by unanimous decision back in October 2018. Amanda and her trainer, Jordan Maldonado, who's also Cindy's husband, have vowed to avenge that loss. But Taylor remains unfazed.

As part of their IG Live chat, Taylor even showed her promoter, Hearn, her makeshift garage gym during this ongoing coronavirus outbreak.

"I feel like my whole life has been a quarantine," Taylor said with a smile, referring to her serious training regimen.

She added: "All the gyms are shut out right now, but I'm absolutely delighted to have my garage gym."