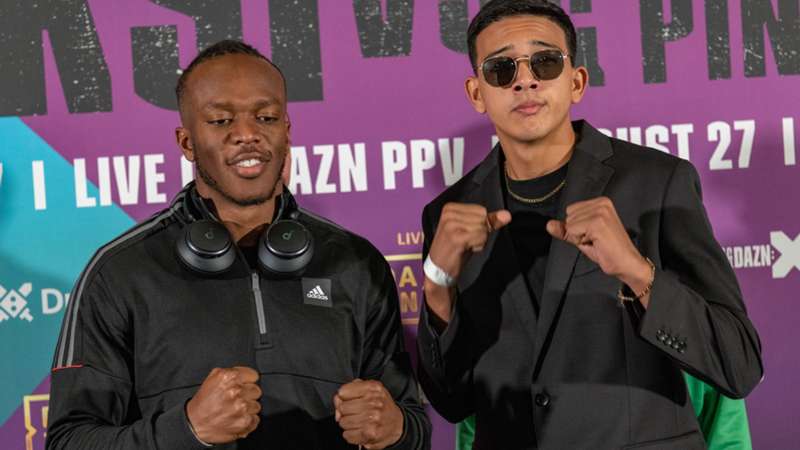 Misfits Boxing
Check your region for KSI vs. Pineda on DAZN

What the YouTuber boxer must do to have his hand raised against Swarmz and Luis Alcaraz Pineda on Saturday, live on DAZN pay-per-view and DAZN.

Talk about upping the ante.

KSI is on the brink of having two fights in one night, as he'll take to London's O2 Arena on Saturday to clash with British rapper Swarmz, before throwing hands with pro boxer Luis Alcaraz Pineda later in the evening.

It's hard enough to have your hand raised in one fight, so the YouTuber boxer will be hard pressed to celebrate two victories in one night. Yet, that's his task at hand.

That being said, DAZN lists his keys to victory for how to set off enough fireworks in this pair of fights to possibly land a mega bout with Jake Paul in the near future.

KSI's keys to victory for having two fights in one night

Have full ambition to make quick work of Swarmz

Fighting two fights in the same night, it’s a no brainer that KSI must make quick work of Swarmz in his opening bout. Producing an early stoppage will allow KSI to shake off any thoughts of ring rust and also give him a confidence boost toward later on in the night when he’ll clash with Luis Alcaraz Pineda. But most importantly, defeating Swarmz quickly will allow KSI to conserve the energy needed for his fight later in the night.

Get into groove behind the jab, mix in the right hand

KSI showed the ability to consistently blast Logan Paul with an overhand right in their pair of fights, especially the rematch. It would behoove him to throw a range-finding left jab only to come down hard with that overhand right against both Swarmz and Pineda on Saturday. The jab could be used as a setup feint as long as the overhand right lands with blunt force thereafter. He's got to let his hands go.

If KSI wants to fight Jake Paul in the near future, fireworks and back-to-back highlights against Swarmz and Pineda just might book the YouTuber’s ticket. With KSI having already defeated Paul’s older brother, Logan, a fight with Jake Paul would sell itself. Paul has shown a penchant for fireworks with four of his five victories coming by the way of knockout including his biggest KO to date in a rematch against Tyron Woodley last December. That being said, Paul has never fought a professional boxer the way KSI is doing with Pineda. Considering Pineda’s losing record as a pro, KSI has got to make a statement against him. Accomplishing that with style points could pave the way for a lucrative tilt with Paul to decide which YouTuber boxer reigns supreme in the ring.