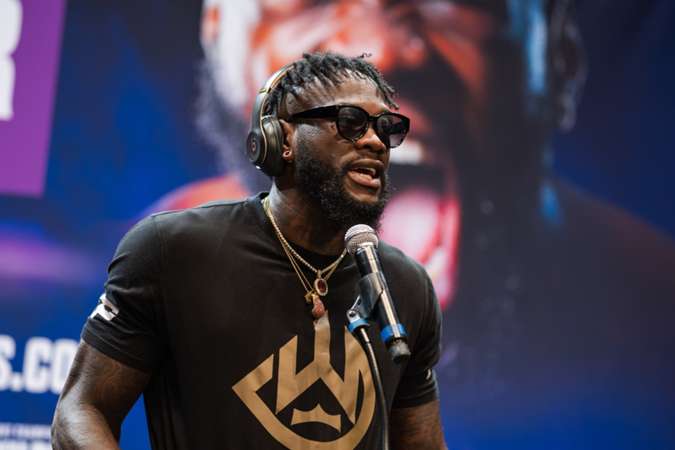 Ryan Hafey/Premier Boxing Champions
Check your region for Canelo vs. GGG 3 on DAZN

Against Robert Helenius on Oct. 15, Wilder will look to deliver what Ruiz couldn't against an aging Luis Ortiz — a KO.

The former WBC world heavyweight champion flashed his megawatt smile while telling Fox Sports: “Deontay Wilder's back. We're always looking for great, exciting fights. If (Ruiz is) what lines up next, I've gotta handle business, but after that, we can get it on."

Wilder said that before humbly congratulating Ruiz, the former unified world heavyweight champion, on his win and exiting the ring.

Wilder is slated to clash with Robert Helenius on Oct. 15, and if he handles his business as he alluded to, “The Bronze Bomber” could find himself in the ring with “The Destroyer” in the near future.

But if Wilder is going to truly drum up interest for a fight with Ruiz, he will have to do to Helenius next month what Ruiz failed to do against Ortiz — deliver a raucous knockout.

Listen, Ruiz defeated Ortiz by a unanimous decision powered by three knockdowns. The first and third knockdowns were electric, with Ruiz reminding the boxing world of his hair-trigger ability to uncoil that rapid right hand.

The first of three knockdowns came on a scintillating overhand right out of nowhere.

The second knockdown should have been ruled a push, as Ruiz used his weight to deposit Ortiz onto the canvas following a clinch.

The third knockdown came from a compact right hook that banged off Ortiz’s temple to drop “King Kong” in a heap.

Andy Ruiz gets his third knock down of the fight late in the 7th round!#RuizOrtiz pic.twitter.com/dcEa7HqCxu

Those were the sticking points of Ruiz’s victory.

However, Ruiz’s efforts were also unsustainable, turning in too many low-action rounds in which he failed to seize the moment, pounce on the aging Ortiz, and finish the 43-year-old Cuban. Wilder managed to do this twice against Ortiz, as he generated a 10th-round TKO of the Cuban, overcoming a turbulent seventh round in March 2018 and a seventh-round KO in their November 2019 rematch.

Ortiz’s heart, experience, and savvy have plenty to do with Sunday's bout against Ruiz going the distance. He made Ruiz feel his jab and respect his power, perhaps even preventing the younger fighter from going for the kill. But if there was ever the stage for Ruiz to make a  punctuating statement following his improbable and shocking upset over Anthony Joshua in June 2019, it was Sunday night, headlining his own pay-per-view as the 'A' side.

Ruiz got the job done via the unanimous decision win, which is most important. But a stoppage would have propelled “The Destroyer” in a fashion that would properly back his post-fight comments:

“I’m ready, man. I’m hungry,” Ruiz told Fox Sports following his win. “I want to be champion again and bring that belt back to Mexico!”

It sounds great but would have been oh so better if the declaration came after a riveting KO. Ruiz came close with three knockdowns, but a knockout would have set the stage for Wilder to do the same on Oct. 15.

Instead, the onus will be on Wilder to return to his knockout artistry following back-to-back losses to Tyson Fury the past two years.

If Wilder can uncork that massive right hand against Helenius, his former sparring partner, and spell lights out for the Finnish fighter, the interest level in a possible clash with Ruiz should skyrocket.

Where Ruiz was effective yet conservative at times Sunday night, Wilder will look to be downright ruthless in just over a month.