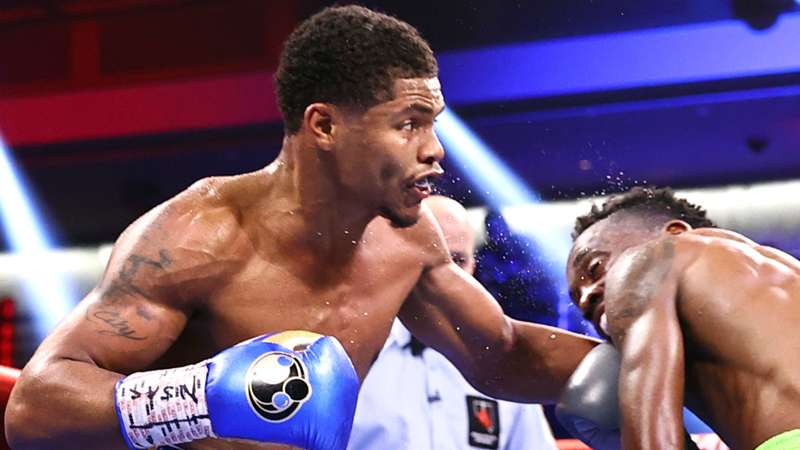 Stevenson, who is now the WBO interim junior lightweight champion, had some words for titleholders Jamel Herring and Oscar Valdez following his victory.

The only possible gripe about Shakur Stevenson's performance Saturday night? That he didn't produce a stoppage.

Stevenson was that superior, that many levels ahead of Jeremiah Nakathila in coasting to a shutout unanimous decision at The Theater at Virgin Hotels Las Vegas. Judges all scored it 120-107 in favor of Stevenson, who improved to 16-0 and captured the WBO interim junior lightweight championship of the world in the process.

Although the 23-year-old Stevenson flashed his megawatt smile, he was also his own biggest critic.

"I ain't really like my performance," Stevenson said following the lopsided decision. "I feel like I could have performed a lot better. He was an awkward, awkward fighter."

Stevenson demonstrated the same defensive boxing wizardry that we've been accustomed to from him, as he landed 114 punches to Nakathila's 28. But in the midst of doing so, Stevenson fielded boos from the crowd, which was desiring a stoppage.

"I tried to a little bit, but I started getting hit with some solid shots and I didn't really like it," added Stevenson about trying to get Nakathila out of there to avoid the decision. "Next time, I'm going to work on moving my head a little bit more and stepping it up a little bit more."

With the victory, Stevenson becomes the mandatory challenger for WBO junior lightweight champion Jamel Herring, but would rather clash with WBC titleholder Oscar Valdez.

"If I had the choice, I'll take Oscar Valdez, but if I got to beat up Jamel to get to it, I'll do that, too," Stevenson said. "Jamel can't beat me. Jamel know what it is."

Herring, who was in attendance, vowed that he'll be a greater threat to Stevenson than Nakathila managed to muster.

While that remains to be seen, Stevenson controlled every minute of every round against Nakathila on Saturday night. After quickly asserting distance and his jab, there wasn't any stopping Stevenson at all. He landed a clean right hook that dropped Nakathila in the second round, although it seemed to be incorrectly ruled a slip. Stevenson detonated the same punch during the fourth to score a flash knockdown.

Blink and you'll miss it. 😳 @ShakurStevenson catches Nakathila with a lightning right hook & puts him on the canvas to close out Round 4. #StevensonNakathila | LIVE on ESPN & ESPN+ pic.twitter.com/372cuB0SQT

When he wasn't hitting Nakathila, he avoided harm's way on the other end by completely eluding punches in another sample size of his defensive brilliance.

While Stevenson may need to use his power and show more urgency against better opponents, he recorded another boxing master class, drowning out yet another opponent with a deluge of sweet science skills.

facebook twitter whatsapp
Fighters touch gloves. Nakathila has landed nine percent of his punches this fight entering the final round. Nakathila goes down, but it's ruled a slip. While Nakathila searches for a desperation shot, Stevenson sits on a left hook to the chest that lands with impact. Pop shot from Stevenson, who seems content letting the bout end in a lopsided decision instead of the fireworks that would accompany a stoppage. (10-9 Stevenson, 120-107 Stevenson)

facebook twitter whatsapp
Audible boos being heard, as Stevenson is in full control, but the crowd would like to see him finish Nakathila. Low-action round. (10-9 Stevenson, 110-98 Stevenson)

facebook twitter whatsapp
Right-left combo around the guard lands for Stevenson. More warnings from the ref about stepping on each other's feet. They're excessive. Nakathila doesn't have any answers for Stevenson at all. (10-9 Stevenson, 100-89 Stevenson)

facebook twitter whatsapp
Stevenson is opening up the offense, letting his hands go a bit more. He's walking Nakathila down and he might be going for the stoppage. Let's see. The referee will not let up warning both fighters about stepping on each other's feet. Southpaw vs. orthodox — it's going to happen. Nakathila connects upstairs, but is brushed back with a counterpunch. (10-9 Stevenson, 90-80 Stevenson)

As Terence Crawford is analyzing his friend Stevenson's boxing mastery ringside, Stevenson brushes Nakathila back with a left hand.

.@terencecrawford checks in from just behind @ShakurStevenson's corner entering the final third of the fight.#StevensonNakathila | LIVE on ESPN & ESPN+ pic.twitter.com/2srVN5GSF2

He's making it look effortless in full command. Stevenson in pursuit, lands a left to the head, before digging a short left uppercut to the body. He evades three punches from Nakathila as the round closes. Untouchable. There are levels to this and Stevenson is clearly on a different level. (10-9 Stevenson, 80-71 Stevenson)

facebook twitter whatsapp
Stevenson unloads on a left hook to the head, then evades a counterpunch coming back at him. Too smooth. Nakathila lunges and misses wildly. Stevenson goes back to the body, as Nakathila's hands are slowly coming down to brace himself for the next body shot. (10-9 Stevenson, 70-62 Stevenson)

facebook twitter whatsapp
Nakathila hasn't landed a single jab yet. Meanwhile, Stevenson continues to hit and not be hit. Nakathila is averaging 1.6 punches per round. Nakathila lands a couple of right hands, perhaps making Stevenson feel his power. Stevenson opens up the real estate moving widely around his opponent now. (10-9 Stevenson, 60-53 Stevenson)

facebook twitter whatsapp
A check right hook to the head dropped Nakathila last round, as Stevenson looks to build on it. He opens up the fifth round with a left hook. How frustrating must it be for Nakathila, who is working hard to get inside, only for Stevenson to elude everything. Stevenson has skills on top of skills, with more power than he's credited for. Stevenson unleashes a big left hook to the chest, before flashing his megawatt smile. Demoralizing stuff, as Nakathila has yet to solve this complex problem. (10-9 Stevenson, 50-44 Stevenson)

Southpaw vs. Orthodox, there are plenty of warnings from the ref about the fighters stepping on each other's feet. Nakathila has only landed five punches through the first three rounds — proof of Stevenson's defensive wizardry. Stevenson sees an opening and aggressively works his way inside to unleash back-to-back left hooks upstairs. Moments later, another pair of left hooks land for Stevenson, the former featherweight world champ. Right hook scores a flash knockdown during the waning seconds. Nakathila is right up and the round is over.

Blink and you'll miss it. 😳@ShakurStevenson catches Nakathila with a lightning right hook & puts him on the canvas to close out Round 4.#StevensonNakathila | LIVE on ESPN & ESPN+ pic.twitter.com/372cuB0SQT

facebook twitter whatsapp
Instant replay shows that a right hook landed clean and that slip that the ref called should have been ruled a knockdown for Stevenson. The Newark, New Jersey product is super efficient, picking and placing his punches with pinpoint accuracy. Seemingly nothing is wasted output from the 23-year-old. Nakathila trying to get inside aggressively. He needs to dirty up the fight just like that, even if it means eating a punch to get there, because this pace and tempo is right up Stevenson's alley. A better round for Nakathila, but Stevenson still takes it. (10-9 Stevenson, 30-27 Stevenson)

facebook twitter whatsapp
Nakathila only landed one punch that first round and then missed the stool while trying to sit after the first round. While evading a punch, Stevenson lands a right and then fires a left that connects as well. Right lands for Stevenson. Nakathila gets spun around and falls, but it's ruled a slip. I thought it was a knockdown because it came after a punch. Stevenson now gets low and deposits a straight left hand to the body. And another follows. Stevenson is the epitome of hit and don't get hit. (10-9 Stevenson, 20-18 Stevenson)

facebook twitter whatsapp
Stevenson immediately into his stance and establishing a distance. Nakathila comes over the top with an overhand right that misses its mark. Stevenson buries a big left hand into Nakathila's chest. That'll get his attention. Nakathila misses on a right hand yet again, but is doing a good job getting inside. Looping left hand from Stevenson hurts Nakathila whose legs briefly buckled from the shot. (10-9 Stevenson)

Stevenson, who's being led out to the ring by rapper Toosii, can earn a title shot at WBO junior lightweight champion Jamel Herring or WBC titleholder Oscar Valdez with a victory tonight.

facebook twitter whatsapp
Stevenson enters this bout having allowed his opponents an average of 4.4 punches landed per round. That's the best defense in boxing statistically. Ultra stingy stuff from the 23-year-old. We'll see how Nakathila stacks up.

Pedraza notches the TKO, as Rodriguez couldn't see out of his swollen-shut left eye. His right eye isn't in great shape, either. Impressive output from Pedraza whose pointed punches and constantly-switching styles allowed him to dictate the pace and place punches when and where he wanted them.

And the fight is stopped!!!

facebook twitter whatsapp
Pedraza digging in with that short right uppercut twice already during the opening minute of this round. Pedraza is picking up his volume a notch. He lands a left uppercut while switching stances. Impressive stuff from the veteran. One-way traffic this round through two minutes. Pedraza looking very much like a "Sniper" by finding a home with that left uppercut. (10-9 Pedraza, 78-74 Pedraza)

facebook twitter whatsapp
Rodriguez picking up his aggression now, getting inside and firing off combinations. Rodriguez takes the round, but has to follow up on successful offense. He lands a two-punch combination during the waning seconds, but inexplicably backs off. Doesn't make sense. (10-9 Rodriguez, 68-65 Pedraza)

facebook twitter whatsapp
At the halfway point of this bout, which is set for 10 rounds, Pedraza is walking Rodriguez down, keeping him at the end of a stinging jab. Left hook lands for Rodriguez, but he inexplicably lets up and Pedraza goes right back to the jab. Pedraza continuously splitting Rodriguez's guard here with that jab. (10-9 Pedraza, 49-46 Pedraza)