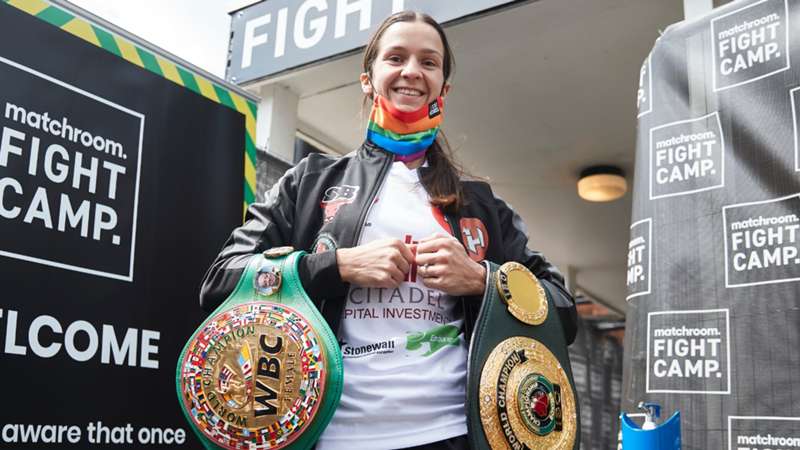 Terri Harper believes that Natasha Jonas has everything to prove in their bout on Friday night, despite the 13-year age gap with her opponent.

Both Harper and Jonas have 10 professional fights to their name. Harper remains undefeated (10-0, 5 KOs) while 36-year-old Jonas (9-1, 7 KOs) suffered a loss to Brazilian fighter Viviane Obenauf in 2018.

The 23-year-old Harper goes into the fight at Matchroom's Fight Camp in Brentwood as the defending WBC and IBO women's super-featherweight champion, and while she has likely only just begun in her professional career, the Doncaster fighter speculated that a loss could end Jonas’ time in the ring.

“Tasha, what has she done in her professional career?” Harper asked during an interview with Matchroom.

“She’s come from the amateurs, as an elite amateur. She’s yet to prove herself, I think the pressure’s on her.

“What’s she gonna do when she takes a loss to me, is that the end of her career? Is this her last chance to really prove herself?”

Harper explained that she had used the coronavirus lockdown constructively, after getting over the disappointment of her originally scheduled fight with Jonas being cancelled due to the pandemic.

“Probably four weeks in, that’s when we got the news the fight was cancelled. I said to Andrew [Bulcroft, her manager], the weeks we’ve done would go to waste, so I knew I had to carry on training.

“I said that’s what kept me sane for lockdown. It kept me in a routine, the garage set up with a punchbag. I just used the time that we got extra. I put it to good use.”

Harper remarked on her dramatic ascent from working in a chip shop in Doncaster to heading up the card for Fight Camp’s second week, which has seen Matchroom’s HQ turned into an outdoor venue.

She recalled her move into boxing as a teenager, saying: “Football was my first sport. I’ve always been sporty, but when I fell in love with boxing, that’s when I left my football days behind. I just took off with my boxing career.

Harper expressed disbelief at the rapid transformation in her fortunes after giving up work in a takeaway.

“I’ve gone from working in a chip shop to boxing on the main stage. I just want to inspire the younger generation.

“For me, being in this situation, I never would have dreamed it in a million of years. I’ve popped out of nowhere, WBC champion.

“Four years I spent learning how to fry and cook fish. Here I am, getting in all these hotel rooms up and down the country, and it’s a bit surreal. On the main stage getting recognised in places.

“I was just a girl working in the chip shop.”

Matchroom Boxing’s Fight Camp 2, headlined by Harper vs Jonas, airs live on DAZN in the U.S. and Sky Sports in the UK on Aug. 7.