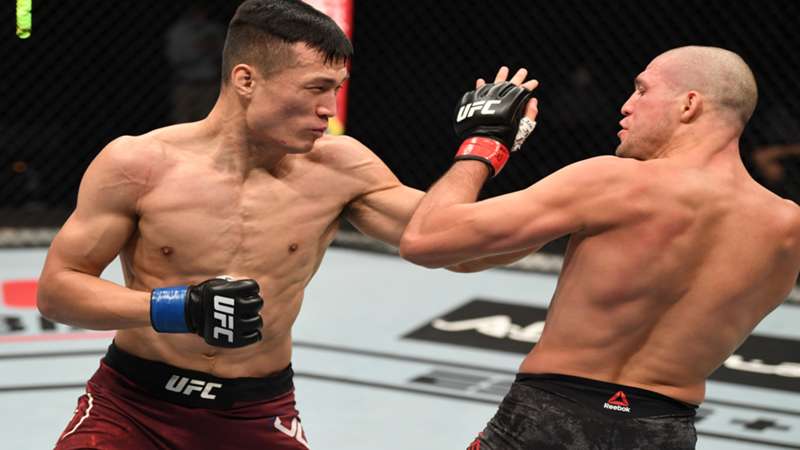 Chan Sung Jung has been involved in some of the most exciting fights in MMA history. The man, also known as "The Korean Zombie," put himself in the minds of mixed martial arts fans with his back-and-forth war in a losing effort against Leonard Garcia at WEC 48 in April 2010. A fourth-round submission win over former interim lightweight champion Dustin Poirier in May 2012 was one of the greatest fights in featherweight history and cemented Jung as a must-see attraction and a crack at then-titlist Jose Aldo at UFC 163.

After taking nearly four years off due to serving in the military in his native South Korea, Jung's returned and had all-action fights with Yair Rodriguez and Brian Ortega. The Rodriguez clash in November 2018 will go down as an instant classic as both guys battered each other for nearly 25 minutes, with Rodriguez winning with a spinning back elbow knockout with one second remaining.

But the Ortega fight in October was a different type of contest. Ortega delivered vicious shots throughout to earn not only the victory but a title opportunity against Alexander Volkanovski later in 2021. How the fight played out made Jung hit rock bottom. He gained 40 pounds and went to see a psychiatrist. He did an interview with members of the Korean media, saying if he takes too many hard shots as he did versus Ortega, then he'd consider retirement.

Time heals most wounds, though. Jung wants to let everyone know heading into Saturday's UFC Fight Night headliner against Dan Ige that he's doing good and stepping away isn't in the cards.

"I think every fighter thinks about retiring, especially after a loss," Jung told DAZN News through an interpreter. "It will eventually happen, but I'm not thinking about that anytime soon, especially right before a fight."

Jung had come into the Ortega fight with back-to-back TKO wins over Renato Moicano and former lightweight champion Frankie Edgar, respectively. Earning a crack at Volkanovski looked to be in the cards. But, despite things not going his way, the pot of gold at the end of the rainbow remains the same for the 34-year-old, and the journey back to a title shot begins with Ige.

"My goal is to win the title," Jung said. "I do think about retiring here and there. But it's definitely not time now. My main focus is to win this fight and get a title shot."

Some were surprised the UFC booked Jung with Ige considering the former is ranked No. 4 and the latter is No. 8. Ige comes in having won seven of his last eight and has been wanting to lock horns with Jung for more than two years. However, Jung feels Ige is more than worthy of the matchup.

Will we see another Jung war? However long the fight lasts, Jung sees himself victorious and back on track.

"I think like most fighters, everybody always wants somebody above him," Jung said. "I think Dan is more than an adversary opponent. He had a great knockout finish in his last fight with Tucker. He deserves the fight with me.