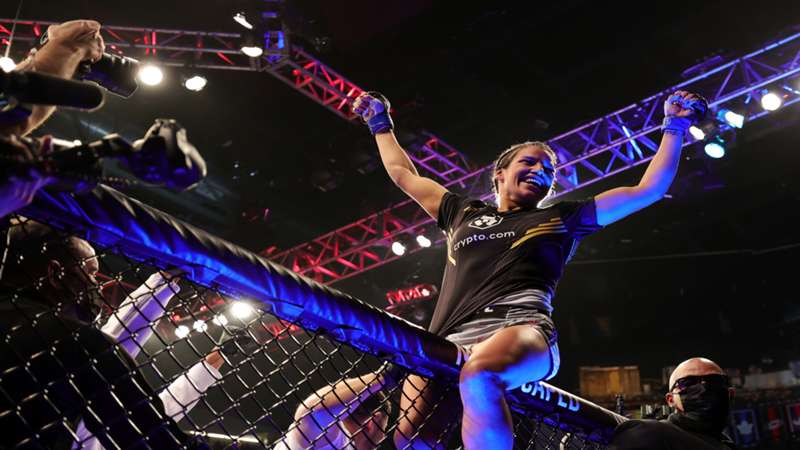 What the bantamweight world champion and former titleholder must do to be successful in this highly-anticipated rematch Saturday night.

It has been over seven months since Julianna Pena shocked the world by making Amanda Nunes tap out to a rear-naked choke to become the new UFC women’s world bantamweight champion.

Since that time, Nunes has vowed to be 100 percent and defeat Pena convincingly to become double champ again. Pena has taken large offense to claims that Nunes wasn’t in optimal health when the two clashed in December and believes this rematch is her chance to silence any naysayers that think the upset was a fluke.

With the stakes at a fever pitch, DAZN lays out the keys to victory for Nunes, who is widely regarded as the greatest woman’s mixed martial artist of all time — and one of the best of all time, period — and Pena, the reigning champ who wants to prove that she's the top fighter.

Julianna Pena’s lead left leg was ripe to be chopped down during their first fight and Amanda Nunes was doing an excellent job of blasting it with leg kicks in the opening moments of the bout. She even dropped Pena with a leg kick within the first 30 seconds. However, when Pena showed a willingness to engage with jabs and hooks, Nunes abandoned the leg kick altogether. She threw hands with Pena over large sequences, instead. This time around, if Nunes has early success with the kick on Pena’s left leg, she should keep using it. After all, those leg kicks could buckle Pena enough for Nunes to detonate her heavy overhand right to knock the crown off the champ.

Nunes’s jab was a weapon in the original fight with Pena. It found the mark with thudding impact. But when the “Lioness” missed with it and absorbed offense from Pena the other way, she failed to time enough significant counterpunches aptly. Doing so with power would have Pena on notice and perhaps even make her think twice about engaging. Or Pena could throw caution to the wind and engage with heavy artillery only to leave herself vulnerable to Nunes's counterpunches regardless.

Pena does have a tendency to detonate her hooks with wide, looping action, which Nunes could sense and launch an opportune counter for. Any way one looks at it, Nunes’s jab has to be consistent and when she feels striking heat coming at her, timing solid counters would go long ways to having her become double champ again.

Pounce on finish when there’s an opening

Within the first two minutes of their December clash, Nunes launched a body kick followed by a stiff jab that put Pena on her backside. Nunes then proceeded to hover over Pena for nearly 20 seconds before coming down with a hard right hand.

We get being patient and trying to unload at the right time but Nunes took too long to pass Pena’s feet and launch the blow. Plus, after she connected on the punch, there wasn’t a follow-up as she allowed Pena to grab hold of a single leg, thwarting Nunes’s momentum. Nunes can’t allow such events to transpire in this rematch. When she manufactures any significant offense, she’s got to pounce on Pena and aim for the finish that she so covets to grab hold of the bantamweight strap once again.

“Whatever happens in the fight, I’m going to look to finish it,” Nunes told DAZN News earlier in the week.

“But I can also go to five rounds as well. I’m not putting pressure on myself. I just want to step in and get the job done. How it goes, I’m going to be very happy as long as I have my belt in my hands.”

Hammering out a finish with blunt force as she did against the likes of Holly Holm, Cris Cyborg and Ronda Rousey, to name a few, would aid in that quest. Nunes’s vaunted overhanded right could be the weapon to end Pena’s night hellaciously.

Listen, until Nunes’s adjustments prove otherwise, Pena should jab away as she did the first fight. Pena’s jab prodded past Nunes’s guard, or lack thereof, and transitioned from peppering to pounding the “Lioness.” The thumping power jab in the pocket can once again be a top weapon of choice for Pena if she’s going to retain the title and prove that her first victory over Nunes was far from a fluke.

As aforementioned, Pena has a tendency to loop her left and especially right hooks in a wide manner. Perhaps Nunes didn’t sense that enough to capitalize during their first fight, but the women’s MMA GOAT certainly knows that entering this rematch. That’s all the more reason that “The Venezuela Vixen” must keep her striking tight and compact. Those short but swift shots would serve as high-powered offense and defense as they’d limit Nunes’ ability to detonate disastrous counterpunches the other way.

To do this and retain the title, Pena must keep composed. As much as Nunes might have a chip on her shoulder toward bouncing back from the loss, Pena has it to prove that the GOAT’s health had nothing to do with the defeat. Remaining composed, even while exchanging fire in the pocket, could be vital.

Take Nunes down early, slow pace of the fight

An erupted fire fight paved the way for Pena to cinch in a rear-naked choke and make Nunes submit in one of the biggest upsets in UFC history. Perhaps Pena doesn’t have to let the rematch get to that point if she can manage to take Nunes down early, grapple the “Lioness” and sap her energy. Accomplishing early takedowns will allow Pena to drain Nunes en route to banking rounds and possibly even soften her up enough for another stoppage victory.

Follow DAZN News on Saturday night at 10 p.m. ET for all the live updates, results and highlights from UFC 277: Pena vs. Nunes 2.