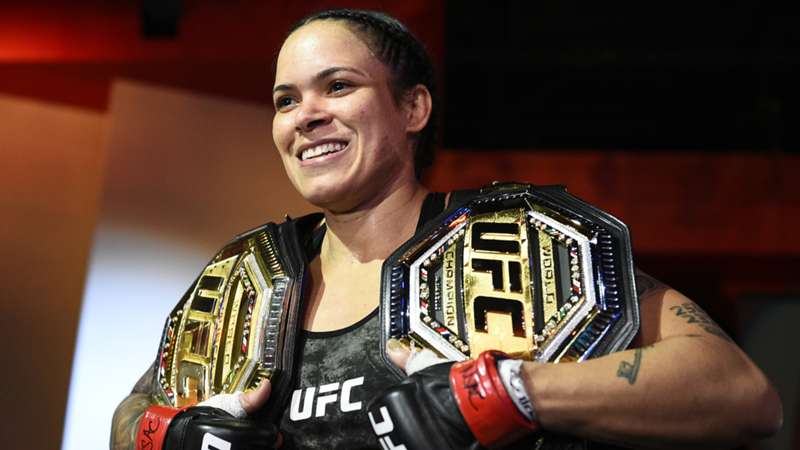 The women's mixed martial artist GOAT left no doubts that she could make the necessary adjustments at UFC 277.

"When the 'Lioness' doesn't get the prey the first time," she told Joe Rogan in the Octagon on Saturday night, "I set the trap better, and I know I will get it the second time."

Nunes certainly made the necessary adjustments to dominate Julianna Pena in the main event of UFC 277 from the American Airlines Arena in Dallas, Tex. Judges there scored it 50-45, 50-44, and 50-43, all in Nunes's favor as she regained her bantamweight world title to become a double champion once again, managing to reinforce why she's the women's MMA GOAT.

From the opening round, Nunes, also the featherweight titleholder, flashed a southpaw stance to throw Pena off. The adjustment from her loss to Pena back in December helped pave the way for Nunes to really let her hands go in the second round, where she dropped the champion three times via two massive right hooks and an electric left hook as well.

Nunes shrewdly took Pena down in the third round to slow the action. Pena threatened several submissions on the ground, including an armbar that Nunes wriggled out of, but the "Lioness" opened up a nasty gash on "The Venezuelan Vixen's" face with some slashing elbows.

Nunes again resorted to a takedown in the fourth round but again had to fight off Pena's savvy submission attempts off her back.

Despite Pena's ultra grit, Nunes kept bringing the pain in the fifth and final round, where she threatened her own submissions before the final horn.

An excellent performance from Nunes to punctuate a captivating main card pay-per-view.

facebook twitter whatsapp
Judges score it 50-45, 50-44, and 50-43 all in favor of the winner and new bantamweight world champion, Amanda Nunes. Double champ again!

Pena needs the stoppage with her team instructing her to get it by striking up the middle. They embrace before breaking into their respective stances. Pena lands a shot, but Nunes manages to take her down again, slowing down the action. Still, Nunes must be careful as Pena is dangerous on the ground. Pena threatens a triangle. Almost has it. And again. Now, Nunes has an Anaconda secured. Well .. almost, as they're back on their feet. Nunes with another takedown. They're both fatigued. Pena desperately trying to yank at Nunes's arm. Pena is trying to roll to a kimura, but Nunes briefly takes her back. Under two minutes. What a fight. Nunes is on top of Pena, trying to unload elbows. There's one elbow and another seconds later. One minute left as Nunes, standing over Pena, unleashes a hard right hand. Nunes has a body triangle, but Pena breaks out of it. Nunes is raining down with punches from the top. Nunes dances over a fallen Pena during the waning seconds, and there's the final horn. What a performance from the GOAT. (10-9 Nunes, 50-45 Nunes)

facebook twitter whatsapp
Pena swings, and Nunes ducks under to take her down. She's laying on top of Pena, looking to unleash those elbows. Again, Pena grabs hold of Nunes's arm. Nunes has to be careful of that. But Nunes breaks free and blasts Pena with some solid fists. Pena goes for an arm triangle now. Again, Nunes breaks free. Pena has an armbar cinched in tight! But Nunes powers through with her legs and breaks free! Unbelievable. Can't help but wonder if Nunes regrets her decision to take Pena down because the champ is ultra crafty from the bottom. Nunes is now in side control, which seems to be safer. Nunes is blasting Pena with elbows. Pena's face is split open as they're back on their feet. Nunes scores another takedown. A minute left. Nunes stands over a fallen Pena, inviting the champ up to her feet. The ref makes her stand. Pena looks to have staggered Nunes with a clipping shot. Ultra grit being shown by the champ despite the punishment she has been taking. Fifth and final round next. (10-9 Nunes, 40-36 Nunes)

facebook twitter whatsapp
Pena's corner tells her she already took Nunes's best shots and that this is her round. Nunes begins tagging the champ with a left that splits the guard. Spinning back elbow from Nunes catches Pena's arm. Pena is tough but is eating plenty of shots. Nunes with a front kick to the body. Composed, sharp output from the GOAT and former champ. Pena is swinging wildly but Nunes counters and lands. Nunes takes Pena down but the champ fights furiously from the bottom, looking for any submission to manufacture. Pena tries to control posture but Nunes looks to be in control. Pena is trying for an armbar off her back. Nunes is being extra cautious. She rains down with a slashing elbow and another and another on Pena, who's paying the price. Another nasty elbow lands for Nunes. Pena's face is busted open. Pena yanks and grabs hold of Nunes's arm, threatening an armbar! With plenty of grit, Nunes pulls her arm free. (10-9 Nunes, 30-27 Nunes)

facebook twitter whatsapp
Some swelling under the right hand of Nunes. Within the first minute, Nunes drops Pena with a thud courtesy of a right hook that she absolutely sat on! Pena is hurt and wobbly, trying to regain her bearings. Massive right drops Pena again! The champ is back up but must be careful! Pena finds success moving forward while striking up the middle. Right hook connects across Pena's jaw under the two-minute mark. Nunes stuns Pena and drops her seconds later — this time with a left hook! Nunes invites Pena back up only to greet her with another stiff punch. Under a minute. Nunes goes for a head kick that misses, and Pena nails her with a right hook. (10-9 Nunes, 20-18 Nunes)

Julianna Pena vs. Amanda Nunes 2; Round 1

facebook twitter whatsapp
Fight's on as both tap gloves in a show of respect. Nunes starts in a southpaw stance. Nunes swings and misses on her vaunted overhand right. Pena encroaches and leads with her right hand. Nunes looks to be maintaining space. Nunes with a hard leg kick to Pena's calf. Nunes lands that right hand just over Pena's temple, putting the champ on notice. Pena fights forward and Nunes makes her pay with a stiff right. Nunes follows with a counter right as well. Sharp output from the former champ. Another right hand hurts Pena, and Nunes adds a leg kick for good measure. Pena sneaks in a right hand that lands as she moves forward. Left-right-left combo lands for Pena. Nunes shoots for Pena's leg, and the champ responds with a couple of rights. Nunes with a solid right. A more thorough round for Nunes, but Pena brought some heat late. (10-9 Nunes)

Can "The Venezuelan Vixen" make it back-to-back victories over the GOAT? We're about to find out!

The champ is coming to silence the doubters 😤

While speaking with Joe Rogan, Moreno takes plenty of pride in the accuracy of the liver kick that basically shut Kara-France down.

The interim champion then shifts his attention to Deiveson Figueiredo, the reigning flyweight world champ, who he invites into the Octagon. Standing face-to-face, Moreno requests a fight in December and says he doesn't care if it's in the champ's native Brazil.

Such a fight would mark the fourth clash between the two. To date, they've fought to a draw and have one win apiece, with Figueiredo winning their last bout in January via unanimous decision.

Moreno stops Kara-France in round three

Kara-France shoots, and Moreno greets him with a spinning backfist that lands this time. Moreno blasts Kara-France with a liver kick. Kara-France hits the canvas in plenty of pain as Moreno smothers him with punches. The ref steps in and stops the action! Just like that, Moreno, who was losing this round, wins the fight in dramatic fashion!

HE DID IT!!! @THEASSASSINBABY IS YOUR INTERIM FLYWEIGHT CHAMPION!!!!! 👑 #UFC277 pic.twitter.com/r09TD4acId

facebook twitter whatsapp
Kara-France goes for a head kick, Moreno ducks under it and nearly takes his back. Kara-France gets free, but Moreno peppers him with a couple of heavy-handed shots. A right-hand sneaks through Kara-France's guard. Kara-France returns fire moments later with a one-two combination. Undeterred, Moreno fights forward and lands a grazing shot. They're exchanging shots, with both fighters letting their hands go a bit further now. Each man has his moments, but Moreno got the better of the exchanges with more forward pressure. (10-9 Moreno, 20-18 Moreno)

Brandon Moreno vs. Kai Kara-France; Round 1

facebook twitter whatsapp
An inadvertent low blow of a kick on Moreno briefly halts the action as he's given a chance to recover just after the opening minute of action. The fight resumes as Moreno launches a head kick that Kara-France takes great cover of. Another head kick attempt from Moreno was protected well by Kara-France. Left hand from Moreno gets Kara-France's attention. Big right hand from Kara-France brushes Moreno back. Moreno threatens taking Kara-France's back, but the latter wriggles free. (10-9 Moreno)

Kai Kara-France has a chance to join fellow City Kickboxing (of Auckland, New Zealand) teammates Israel Adesanya and Alexander Volkanovski as a world champion tonight. He can join the championship company with a win over Brandon Moreno for the interim world flyweight title.

Pavlovich stops Lewis in 55 seconds but not without controversy

Pavlovich catches Lewis with a solid right hand across the jaw, instantly buzzing him. Pavlovich follows the shot with a couple of uppercuts and another right to drop Lewis. Referee Dan Miragliotta takes a closer look as Pavlovich is raining down with hammerfists, and Miragliotta stops it just 55 seconds into the bout!

Lewis protests the stoppage to no avail. The fact that Lewis sprung right up onto his feet after getting dropped shows that he was willing and able to keep fighting. I thought Miragliotta could have let the contest go on a bit longer to see how Lewis responded.

facebook twitter whatsapp
Derrick Lewis, the man with the most knockouts in UFC history, looks for another highlight finish — this time against Sergei Pavlovich. The Russian fighter enters the Octagon on a three-fight win streak.

Pantoja is a beast!

What a beast Alexandre Pantoja is! He rushes Perez and unloads one-two combination of bombs before proceeding to take his back. Pantoja wraps his legs around his opponent's waist, tightly hanging onto Perez's back. Pantoja then cinches in a rear-naked choke on Perez's jawline, quickly forcing a tap out. And all it took was 91 seconds.

A title shot should be in Pantoja's near future.

facebook twitter whatsapp
Alexandre Pantoja vs. Alex Perez is next. Pantoja is riding a two-fight win streak, while Perez is coming off a November loss to Deiveson Figueiredo.

Look who's in attendance

Make it nine in a row for Magomed Ankalaev, as he has the second-longest win streak in UFC light heavyweight history. Smith fractured his leg in the first round and somehow made it into the second. Ankalaev took advantage by raining down on a fallen "Lionheart" with a bevy of punches until the ref stopped it 3:09 into the second round. Could a title shot be next for Ankalaev?

A NEW LHW CONTENDER HAS EMERGED!

facebook twitter whatsapp
Ankalaev isn't wasting time introducing Smith to his variety of striking. Ankalaev blasts Smith with a head kick in addition to a stinging jab and leg kick combination that buckled Smith at the knee.