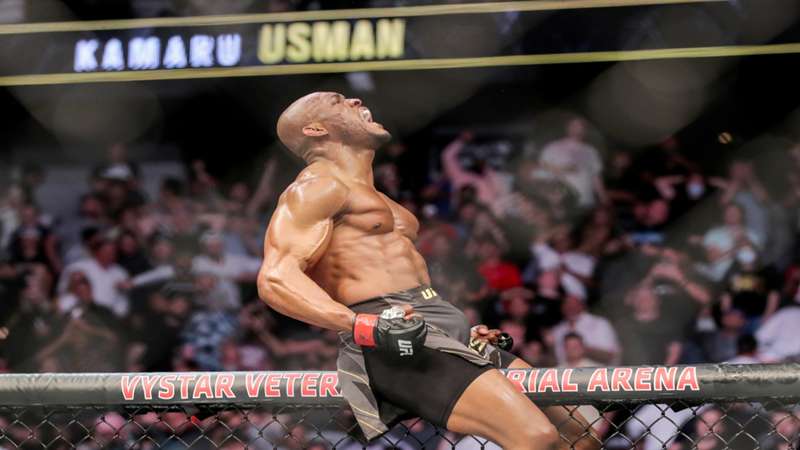 Getty Images
Check your region for Usyk vs. Joshua 2 on DAZN

What the dominant welterweight champion and rugged contender must do to be successful in their UFC 278 title match.

Kamaru Usman is on one dominant championship run.

The reigning welterweight champion looks to make his sixth title defense and tie Anderson Silva's win streak of 16 straight Saturday night, when he clashes with Leon Edwards in the UFC 278 main event at Vivint Arena in Salt Lake City, Utah.

Will Usman continue his dominance? Or will Edwards find a way to be crowned the new welterweight king?

With so much on the line, DAZN lists and analyzes the keys to victory for both fighters.

Pressure and be the slick, skilled striker that he is

Leon Edwards does an excellent job of pressuring off his lead leg and forward fighting with a one-two combination or even a head kick at times. It’s not that he packs explosive power as Edwards has only recorded one knockout during this 10-fight unbeaten streak. It’s more that Edwards gets into a rhythm behind his slick, skilled striking. And that translates into banked rounds. If he’s able to successfully pressure Kamaru Usman, walk him down and keep the champion on the back foot, the under-the-radar Edwards gives himself a chance to be crowned the new welterweight ruler.

Be prepared to scramble out of takedown attempts

Edwards is a solid wrestler but not nearly on the same level as Usman. The champion said it best during the UFC 278 press conference: “Let’s be honest … he doesn’t want to wrestle with me.” Edwards doesn’t. And that means showing plenty of hustle on scrambles and stout takedown defense against Usman, who shoots and takes his opponents down as good as any fighter who has ever stepped foot into the Octagon. For whatever it’s worth, when the two clashed nearly seven years ago, Usman recorded six takedowns. Edwards has improved as a wrestler since but must avoid takedowns and letting “The Nigerian Nightmare” grapple and control him on the ground because if that happens it’s over for “Rocky.”

Don’t stand too upright and stiff

While Edwards had dominated enough to have his hand raised through 24 minutes of action against Nate Diaz last June, the British fighter almost cost himself the fight in the final 60 ticks. That’s because Edwards got caught in a lull standing too upright with little to no movement and got blasted by a stinging right-left combo that buzzed him, making the last minute wilder than it ever should have been. He can’t get caught sleeping against Usman who has shown the increased power to turn fighters’ lights out (especially with that right hand), having recorded three knockouts in his last five fights.

The way Edwards firmly plants his lead leg makes him ripe for the picking for Usman to shoot, grab hold and take Edwards down. Usman attempted 13 takedowns when they fought back in December 2015 and landed six of them for a 46 percent clip. Edwards’ wrestling was respectable back then but better now. The thing is Usman’s wrestling has vastly improved too, and is the fulcrum to “The Nigerian Nightmare” aiming for his sixth title defense and 16th consecutive victory, which would tie him with Anderson Silva’s win streak. If Usman is successful taking Edwards down and gains ground control early, it’s going to be a strenuous 25 minutes for “Rocky.”

Point blank: Kamaru Usman has one of the best right hands in mixed martial arts, period. Usman has worked on his right, seemingly improving it with every fight. He dropped Gilbert Burns with a right power jab straight down the middle before finishing him via huge punches to record a third-round TKO back in February 2021. And who could forget the hellacious right hand that eviscerated Jorge Masvidal in their April 2021 rematch at UFC 261? If he catches the taller, more upright Edwards with that right hand, it could be lights out. Usman would be wise to let his hands go early so he could test Edwards’ temperature with it. He’d still have his wrestling and ground game in his back pocket in the case it doesn’t land with desired results.

Refuse to get on the back foot

As aforementioned, Edwards does a solid job of pressuring fighters and putting them on their back foot — a place Usman doesn’t want to be and should avoid. That being said, Usman is in such a zone right now and has been so dominant, that it wouldn’t be surprising to see the champ change levels off the back foot and secure a takedown. He’s just that good. A win over Edwards would mean that Usman defeats a third straight rematch opponent, as he's currently double-lapping the welterweight division in GOAT fashion.