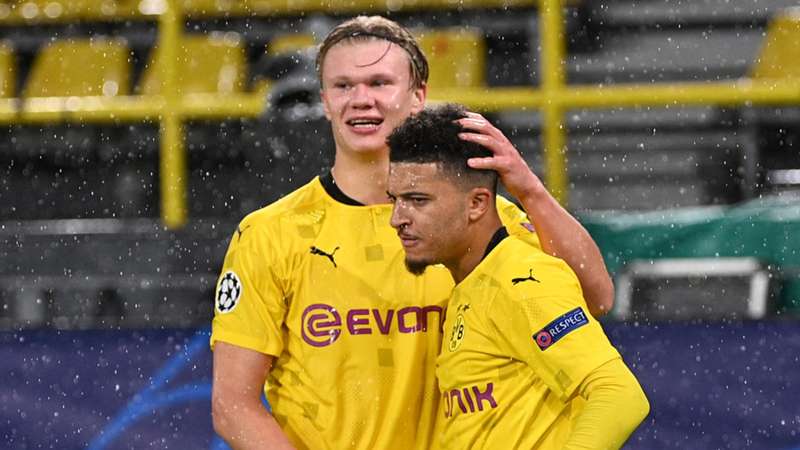 The Black and Yellow's slim chances of playing Champions League football next year have forced the club to make plans to sell.

Borussia Dortmund's troubles on the pitch may lead to the German giants losing one or more of their most valuable stars, according to multiple reports.

Dortmund currently sit sixth in the Bundesliga standings, well outside where they need to be to ensure Champions League qualification next season. Should they miss out on Europe's premier club competition, the financial hit could force the club to sell off the likes of Erling Haaland or Jadon Sancho — and Dortmund have apparently already started planning for the potential departures.

Reports in the BBC and WAZ this month state that Dortmund have created an eight-player "emergency sale list" that features some of their biggest and most desired names.

While not all of the eight would be sold if Dortmund fails to qualify for the 2021-22 Champions League, the BBC report stated that it's likely that "one or two" players could leave Signal Iduna Park along with Sancho (who is expected to head to the Premier League this summer).

At issue is mounting losses suffered by the club, who reported a €26.3 million loss over the fist half of the 2020-21 season, with further losses throughout the duration of the COVID-19 pandemic expected. Although the BBC calls Dortmund "financially one of the healthiest clubs among the European elite," a failure to participate in the next edition of the Champions League could cost the club up to €82.4M (the maximum amount the winning team could take home).

Given that Dortmund have qualified for every Champions League since 2016-17, it's fair to say they've become accustomed to the added prize money from the European competition and would feel the absence of the group-stage minimum €15.25M payout.

Should Dortmund fail to secure a Champions League place (they are six points behind fourth-place Wolfsburg after 21 Bundesliga matches), the first domino to fall would likely be Sancho, whose departure seems likely regardless of his club's fortunes on the pitch.

The England international is highly coveted among the big money Premier League sides — especially Manchester United and Chelsea — and he's expected to fetch a nine-figure transfer fee. If Sancho departs as rumoured, the question would then become who follows him out the door.

Haaland is obviously the biggest target of the remaining names. The Norwegian marksman has set the Bundesliga alight since joining Dortmund ahead of the 2019-20 campaign, and his two goals on Wednesday against Sevilla in the first leg of Champions League last-16 boosted him to 10 total in the competition in just seven games. He has a €75M buyout clause that kicks in during the summer of 2022, but given his prolific goal-scoring numbers Dortmund could be tempted to sell him early for a figure that would rival Sancho's.

The two teenagers on the list would each also fetch a hefty fee on the open market — Transfermarkt estimates U.S. international Reyna's current value at €38M while English youngster Bellingham is listed at €35M. Meanwhile, Witsel (€12M), Akanji (€25M), Dahoud (€8.5M) and especially Guerreiro (€35M) would likely all provide decent returns if sold.

Should Dortmund cement a berth in next season's Champions League, either through their league position or by winning the current tournament, then the emergency sale list could prove moot. But if the unthinkable happens and they miss out on the annual competition, then a fire sale at Germany's second-biggest club may soon follow.