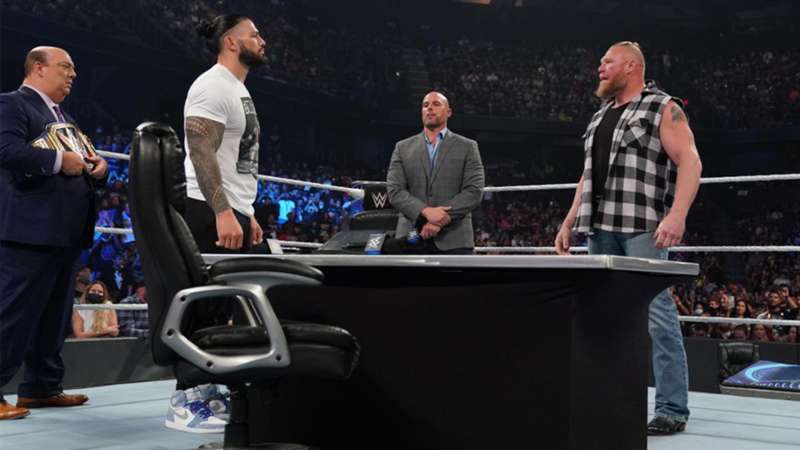 The feud between Roman Reigns and Brock Lesnar reignites on Thursday in Saudi Arabia.

Pro wrestling fans haven't been happy with WWE presenting events in Saudi Arabia because of the political climate in the Middle Eastern country and the fact more notable matches occur there.

The pro wrestling giant is bringing their highest profile match there on Thursday as Crown Jewel takes place from Mohammed Abdu Arena on the Boulevard in Riyadh, as Roman Reigns defends the Universal Championship against former WWE and Universal titleholder Brock Lesnar.

Reigns and Lesnar are no strangers to one another. They have squared off in the main events of WrestleMania 31, WrestleMania 34 and SummerSlam 2018.

Lesnar returned after 16-months hiatus at SummerSlam in August when he confronted Reigns and his special counsel and former Lesnar advocate Paul Heyman after Reigns beat John Cena in the main event of the event.

Since then, Lesnar has been tugging at the strings of Reigns by dropping hints that he's still aligned with Heyman. Along the way, Reigns has questioned whether he can trust Heyman, who hasn't proclaimed which side he's on.

It's hard to predict which way WWE is going to lean in terms of a winner as it would appear this won't be the last time we see this matchup.

Here is everything you need to know about WWE Crown Jewel.

Crown Jewel begins with the kickoff show starting at 11 a.m. ET, and the main show getting underway at Noon ET. The card is expected to last around four hours.

How to watch WWE Crown Jewel

Crown Jewel will be live on Peacock in the United States as the WWE Network transferred to the NBC streaming service in March. You can purchase a premium subscription for $4.99 per month.

If you don't have capable internet speeds, you can order Crown Jewel through your cable or satelitte provider on a pay-per-view price of $44.99.

Where is WWE Crown Jewel?