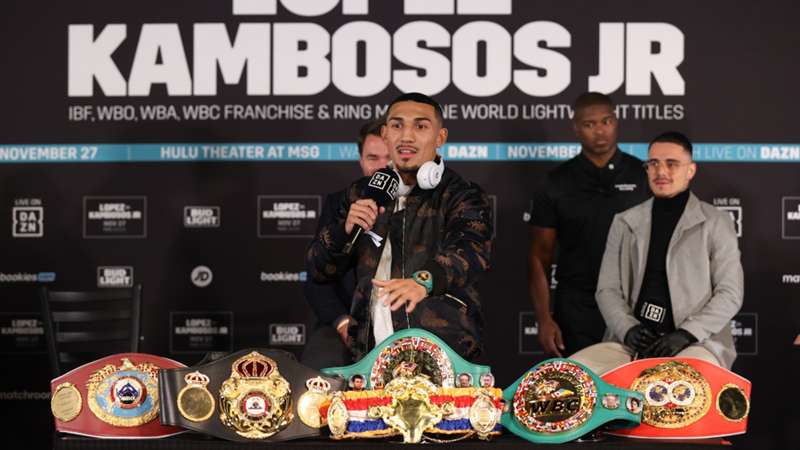 Watch Lopez vs. Kambosos on DAZN (except China)

The unified world lightweight champion always impresses at The Mecca.

Multiple false starts as a result of contractual bidding, venue disputes and his own COVID-19 positive result have slugged Teofimo Lopez into the longest inactivity of his career — just over a year.

That will end Saturday night at the Hulu Theater at Madison Square Garden in New York City, and live on DAZN, where the 24-year-old Lopez will defend his WBA (Super), WBO and IBF lightweight titles against George Kambosos Jr. And if history once again falls in line, expect nothing short of an electrifying performance from the native New Yorker at MSG.

It’s what Lopez does at The Mecca. Prior to his May 2018 fight against Vitor Jones Freitas, Lopez had fought at Madison Square Garden two times. But a grazing right hand behind the ear and a Fortnite dance celebration of the knockout punch in this bout marked his biggest splash at the legendary site to date.

And he only upped the ante by hauling his 10-0 record back to the Hulu Theater in December 2018 and delivering a 44-second evisceration of Mason Menard, knocking the veteran out on his feet with a vicious overhand right. Another Fortnite dance, backflip and the donning of 2018 Heisman Trophy winner Kyler Murray’s jersey — with striking Heisman pose to match — had Lopez elevating from exciting prospect to serious contender and stealing main eventer Vasiliy Lomachenko’s thunder that night.

Lopez would fight two more times at MSG, blasting Edis Tatli in a fifth-round knockout in April 2019 and becoming a world champion by knocking Richard Commey silly in a thrilling second-round TKO in December of the same year.

Those confidence-boosting fireworks at the Garden paved the way “The Takeover” to officially take over via an impressive unanimous decision over Lomachenko in Las Vegas to become the unified world lightweight champion in October 2020.

And now it’s back at the Garden, where Lopez’s star power beams the brightest.

Lopez has tossed around marquee names such as Devin Haney, Gervonta Davis and undisputed junior welterweight king Josh Taylor as possible opponents in 2022.

So, think about how all those false starts and delays resulting in 13 months without a fight has Lopez feeling right about now.

Primed and ready to produce more dynamite at the Garden — not to mention, take out all his frustration on Kambosos.

"We're not going to let down Madison Square Garden. We never have and we never will."

Oh yeah ... he also predicted a Knockout of the Year.