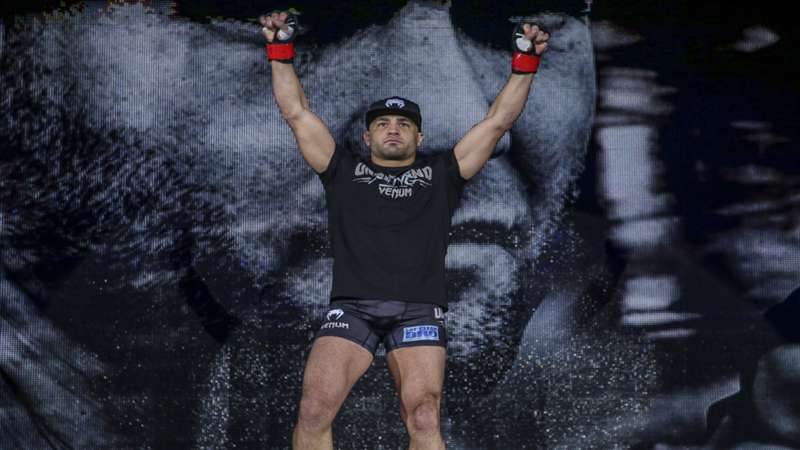 Eddie Alvarez has just about done it all in mixed martial arts.

Alvarez has faced some of the biggest names in mixed martial arts: Former dual UFC champion Conor McGregor, former Bellator lightweight titlist Michael Chandler, and former UFC lightweight titleholders Anthony Pettis and Rafael dos Anjos. In Alvarez's mind, the only thing missing on his resume to cement himself as an all-time great is another world title.

"The Underground King" continues that trek Wednesday night as Alvarez competes in the co-main event at ONE on TNT against Iuri Lapicus.

Ahead of the fight, Alvarez sat down with DAZN News to discuss where capturing another belt places him in the Mount Rushmore of lightweights, retirement and if a win over Lapicus nets him a crack at the gold.

DAZN: You got some good hardware there (behind him while Alvarez was sitting at a table during the interview). You got some gloves, some belts, some pictures. What's the favorite thing on their trophy case behind?

Eddie Alvarez: My favorite thing isn’t here yet. That's going to be the ONE championship belt. There's a missing spot right here.

DAZN: What would it mean to you to win another world title in another organization?

EA: It means everything. One, it's easy to do when you're young, energetic, and excited about the sport. You're just coming in as a puppy, and everything's new. I'm going on my second decade to fighting soon. I've been fighting since I was 19 years old, and to be able to sustain this level of competition, be one of the best lightweights in the world for two decades and continue to win world championships over and over. It's a feat that won't be done and won't be repeated. When I get the third world title, it'll make history. It'll complete every single major organization in the world. It's something that’d never been recorded. It's never been done.

I look forward to it.

EA: I think without it without a doubt. It's not so much about the belts. It's about the competition and the length of time. Anybody can be great for a moment. Even for a short moment, maybe a short period of five years, ten years. I'm not going to say it's easy to be great that long, but it's easier than doing it for two decades. So to be on top and fight the best guys in the world with my resume and fight the champions I have over almost two decades, I don't think it could be argued. I think it'd be argued either way. Fans will argue. I just know the resume's there, the opponents are there, and the belts are there. Check the scoreboard.

EA: I always look at this as a marathon. It's not a sprint. I'm not even trying to look at what's in front of me, whether it be a mile or two miles ahead. I'm just looking down at my feet and trucking along. The byproduct of that and have that kind of awareness and living in the here, and now that presence is like I'm just collecting, collecting belts, collecting world titles. I'm trying to enjoy my run as much as possible while I'm able to run. I never set out when I was 19 and go, ‘I'm going to fistfight, and then I'm going to make millions of dollars, and become world champion, travel the world’.

I never did that. I said, ‘Hey, there's a fight going on in Elizabeth, New Jersey, and I want to try that fight. I don't think anyone in the world could beat me at fighting’. That was my thought. So I went and fought. I knocked the guy out, and I went, ‘Oh, man, this is cool. They pay me. Maybe I can make some money doing this’. And I went from there.

EA: I love this position. I've helped build a number of promotions from the ground up, especially here in America. Bellator was only on ESPN Deportes to start and had this small budget with these little small shows in these little casinos. I was at the face of that for a long time and helped that company grow out. I was with them from their inception, from the very first show. I could see a company being able to break out and the product that the company can provide like fans and audiences. That's what ONE championship is. It's just a matter of exposure. The minute they break the American market, it's game, set, match.

DAZN: What can fans expect from Eddie Alvarez at ONE on TNT coming up on April 7?

EA: High-pressure violence and always being in my opponent's face. I expect to finish before the second bell rings. I'll stand over them. I'll be victorious, and I'll be on my way to a title shot.

DAZN: In your mind, is this fight for a title shot next?