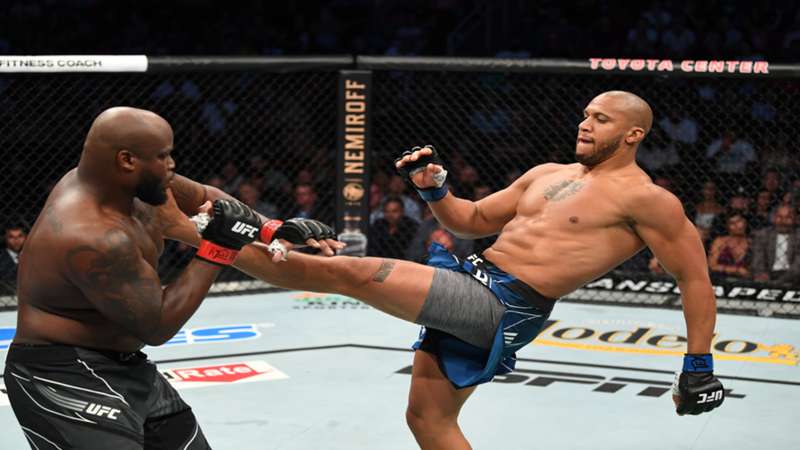 Ciryl Gane has punching power, too.

After picking apart Derrick Lewis with smooth movement and precision striking over the first two rounds, Gane blasted him with an uppercut and finished the show moments later with a right hand and relentless hammerfists to get the third-round TKO in the main event of UFC 265 on Saturday night. The most significant victory of his career to date improved the French fighter's record to 10-0 and more importantly, had him crowned the UFC interim heavyweight champion of the world at the Toyota Center in Lewis' hometown of Houston.

After softening up Lewis with a series of leg kicks that nearly took "The Black Beast" off his feet, Gane landed a sweeping right uppercut that hurt the Houston fighter. He followed that by detonating massive right hands of his own and three lefts to boot. While Lewis tried valiantly to fight back, landing a left hand, Gane put him down with a short right before teeing off with left hands and several right hammerfists onto the head to get the third-round stoppage against the UFC's all-time heavyweight knockout leader.

The decisive output was preceded by two rounds of a masterclass from Gane, who picked Lewis apart with clean jabs, stinging leg kicks that went unchecked and constant movement that negated the hometown fighter's noted one-punch power.

If it wasn't apparent before, it's more than apparent now that Ciryl Gane, the new interim heavyweight champ, is a problem for the division.

facebook twitter whatsapp
Kenney laughs and mocks Yadong and eats a stinging inside leg kick for his humor. Yadong is looking like the sharper fighter through the opening round with his striking. Meanwhile, Kenney in pursuit and pressuring seems to be one step behind of an elusive Yadong.

Song Yadong vs. Casey Kenney kick the main card off

Hello and welcome to the live coverage of UFC 265. Keep it locked here for all the live updates, results and highlights from the main card. The prelims just ended with a hell of a fight between Bobby Green and Rafael Fiziev. Judges gave it to Fiziev by unanimous decision (30-27, 29-28, 29-28).

This fight is UNREAL 😱 #UFC265 pic.twitter.com/L1b0maDhxx