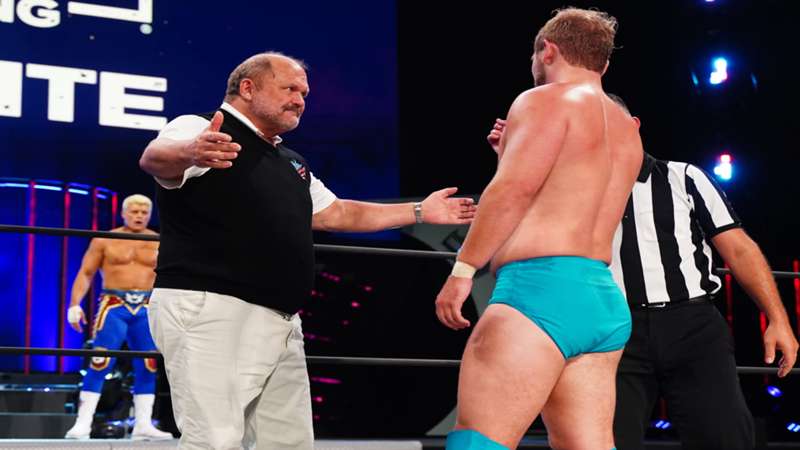 The Hall of Famer discusses a litany of topics.

Arn Anderson has been anywhere and everywhere in his over 40 years in the wrestling business.

He's been in every major organization inside the wrestling ring and outside of the squared circle. Currently, Anderson is the "Coach" for Cody Rhodes and works behind the scenes in AEW. Also, Anderson is part of the hit podcast, "The Arn Show," with co-host Conrad Thompson.

An all new #ARN is available NOW!

Listen as we continue our journey through the early years of "Marty Lunde." Arn discusses his continued run in Southeastern Championship Wrestling, cage matches, Johnny Rich, meeting the future Mrs. Lunde & so much more! pic.twitter.com/6oecDW77Vo

Ahead of Wednesday's AEW Dynamite, Anderson talked with DAZN News about why he changed his podcast format, his son making his AEW debut and working with unique opponents.

DAZN: Hope you had a great Father’s Day. You received a great present when your son Brock picked up a big victory in his AEW debut. You looked like a very proud pop from the time you guys walked out until the match ended. I can just see this sparkle in your eye the entire time.

Arn Anderson: It would be easy for me to try to play a hard ass on this and go, ‘Oh well, business as usual.’ When it's your son out there, he probably had not enough training yet to be under those circumstances, and I was nervous for him. I was more nervous than he was. He actually was pretty solid all day long. But to see him have his first day in a business that I have loved since I was eight years old — and I tell people, it's the greatest way to make a living on the earth, it really is. To see him enjoy himself and hold his own and do well. I am a proud papa.

AA: Oh God. Well, it was a whole different format. It wasn't about me, my first day on TV. I walked out on Atlanta TV and just got slaughtered, and that's the way things were done, and I was glad to do it. I knew going in what it was going to be. His was much, much different. His debut was with the idea that he was, at some point, going to be a player. Me, I was just one of the cattle called that came to television and different territories around the world and was there for one reason: To enhance the other guy. It’s probably as far one end of the spectrum as you can be from his debut.

DAZN: You have reformatted the podcast. I love the way you're doing it now, as it’s known as the early years of ‘Marty Lunde.’ Arn Anderson’s real name is Marty Lunde for people who don't know or live under a rock. What went behind the decision to flip the format of the podcast?

AA: Let me just tell you the honest God's truth. When I got fired from WWE, and was unable to talk about it, but was not sad about it. I was so burnt out at doing that job. The travel was unbearable. The pressure was unbearable. The rules changed day to day. I told myself when I got canned, I was sitting at home, and I went, ‘You can have a new beginning here.’ I'd gotten to the point, to be honest with you, where I did not like the business. I never thought I'd say that. I was just burnt completely out. But I swore I was not going to be that bitter wrestler that had a hell of a career, and if I never, ever am around another wrestling match and it cuts off today, I got no complaints. I'm very fortunate to have spent all this time. It's 40 years in the business. I don't want to be that bitter guy that turns around now and starts to kick everybody in the ass and blame everybody, and I don't want to be that guy.

I want to enjoy what's left of my career and my son's career as long as I can and feel good about it. I saw myself week after week critiquing those pay-per-views for WWE, and I’d tell the truth is I saw it, but it came across as just bitching and being bitter. I would read comments from some of the people on our Twitter page for the podcast, and they would go, ‘Why’s he always so negative? He doesn’t sound like he's having fun.’ It woke me up because I listen to you guys. What you say is what we do. If you don't do that, you're foolish. I'm sitting here. I'm not laughing. Conrad's a guy you could laugh with and laugh at some time. We better laugh at ourselves sometimes. So I decided, I don't think because everybody has a beginning, middle, and end in life.

I don't think we went back and just covered the rough road that I had because it might make some people feel better about themselves that they're not alone out there and rough childhoods or not having parents and having grandparents step up. And all these things that it happened to me growing up as I was very, very poor, and making it to where I can provide a nice living for my family and my children go to college. They didn't go on scholarships. It came out of dad's pocket, but it's the best money I've ever spent. I want to stay positive. I want to be a guy that people enjoy listening to and being around. And it's funny, I've gotten more response by just, and we've just gotten to about the fourth year in the business. We haven't got to the Crockett stuff and WWF stuff and back to WCW. We got a long way to go. We're just now finishing up Pensacola. But you tell me, do you enjoy that more?

DAZN: Absolutely. I see it. I'm going some stuff right now, and I'm in 1996, right after the Great American Bash where you turned on (Kevin) Sullivan. I've always wanted to know your mind's process when you were a producer for WWE and WCW. But I enjoyed this more because it seems like you're happier about it, and it's when you got your start in the business.

AA: I think a lot of this is just being discovered. It's funny. I felt like I’m more over now after being out of the business all this time because people go back and appreciate your body of work. At the time, it was just, ‘Well, this guy isn’t a superstar. He gets his ass kicked every single week.’ It's true, and I did. I didn't have a star look. I wasn't a body guy or one of those guys that was special. It was middle of the road. But when you go back and look at it, and you start seeing some of the magic I pulled off with less-than-stellar performers. I think today's audience, which is smarter. They look at things a little more under the microscope. They go, you know, I never appreciated that guy being able to pull a match out of this other guy who is obviously rotten.

DAZN: Who were a couple guys where you're like, ‘God, I don't I can't do nothing with you,’ but when you got to the back, you were like, ‘Man, that actually was pretty good?’

AA: I was not able to make it happen with the Renegade. I was with most people. CM News, which is PN News, and it drove him nuts that I called him CM News. I didn't really know his name. I had him in Philadelphia, Steven. Where are you based?

DAZN: I'm based in Chicago. I know about Philadelphia. I've heard the stories.

AA: They hate everybody there. They hate their own sports teams. They hate their neighbors. They hate everybody. (For) some reason they loved The Horseman. I wrestled PN News there, and it was a disaster. I went out. He used to do ‘Yo baby, Yo baby Yo," which somebody thought was going to be brilliant. I bounce all over the place for him. Silence. I cut him off. Beat him up a little bit. The place went wild. He made a comeback. Silence. Beat me in the middle. Silence, 1,2,3, and rolled out of the ring to silence. I got up. He was gone. I looked around and just looked around, and the place exploded. It's the damnedest thing I've ever seen. But it's the absolute opposite of what I was trying to get to happen. I could not make it fly. No way.