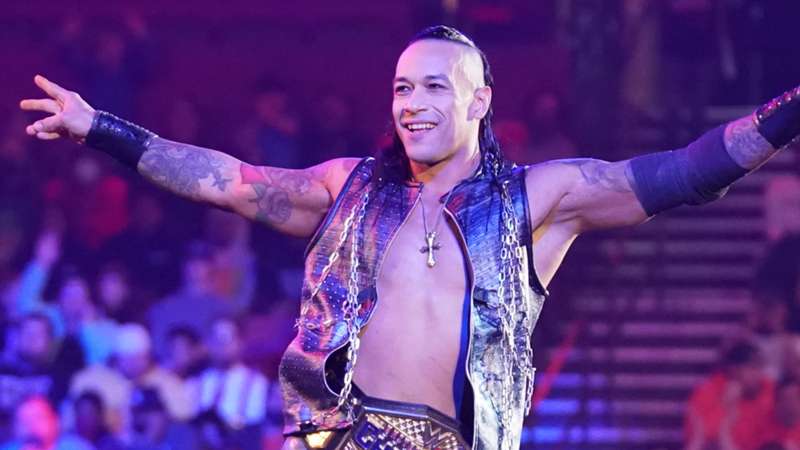 The United States champion discusses trying to build off success from a banner 2021 with an even bigger 2022 and his soaring star power entering the Rumble on Saturday night.

From debuting as a surprise entrant in the Royal Rumble to producing an incredible WrestleMania moment with Bad Bunny, defeating Sheamus at SummerSlam to become the United States champion, and enjoying an emotional homecoming to Puerto Rico, it was a year to remember.

Now, the “Archer of Infamy” can aim to up the ante for 2022, beginning as an entrant in this year’s 30-man Royal Rumble match Saturday night live from The Dome at America’s Center in St. Louis. On the line is a guaranteed challenge for a major championship in one of WrestleMania 38’s main events.

Here, Priest speaks with DAZN News about taking his star power to a new level, delivering a WrestleMania moment for the ages with Bad Bunny, his weapons collection, what he’ll do if he finds himself in the Rumble with Johnny Knoxville, and more.

DAZN News: You made your debut at the Royal Rumble last year. Can you even put into words how excited you are about being in this year’s 30-man Rumble match?

For me, debuting in the Royal Rumble match last year meant the world. So, knowing now that those extra butterflies are out of my system, and I got to experience it once, now I’m looking to see how I could make it even bigger this year. The Royal Rumble is by far the biggest event of the year to me.

DN: How do you explain the shift from dreaming of being a WWE Superstar to fulfilling that dream, becoming a champion, and now wanting to take your career to new heights?

Priest: The ride has been wild. It starts with a dream, but that’s not supposed to be real. That’s why it’s called a dream. Whenever you succeed at something that you dreamt, the dream is unreal. I know that I’m one of the lucky ones. This is not normal. Most people don’t get to live their dream no matter how hard they work — that’s just the way life is.

Not only am I fortunate, lucky, and grateful, but then I end up becoming a United States champion, which is also wild. Many times, I look at myself in the mirror, I’m like — ‘How are you here?’ in the coolest way.

It goes hand-in-hand with why there’s success on top of success. I try to continue being better tomorrow than I was yesterday, which means I gotta look for something else more. Just anything, I need more. I need more moments. I need something that’s going to make people remember my name tomorrow, next week, next year, long after I’m gone. What exactly is it? I don’t know. But I know that I strive for more every single day.

DN: What did teaming with a world-renowned artist like Bad Bunny at WrestleMania 37 do for you and your star power?

Priest: It put my name up there in our entertainment business. When you have someone of that caliber coming in, and then you’re aligning yourself with that person, and they kind of take you under their wing, too, as far as with that extra attention … he wasn’t just here to promote music and knew he had to team with me and whatever. We actually became friends.

He included me with a lot of stuff, and even when he would speak, he always spoke about me. All these little things … again, I know exactly what’s happening, and I’m appreciative of it. He made my name even more so known outside of our business, especially with the Latin community. I’m forever grateful for him doing that. It was nerve-racking because No. 1, it’s WrestleMania, and it was my first WrestleMania.

We know that that match and the experience I had the entire time actually, the whole experience was just insane, awesome, a rollercoaster of emotions but all positive. I’m forever grateful to be the one chosen to get that opportunity.

DN: You share a Puerto Rican brotherhood. Did that make the WrestleMania moment with Bad Bunny all the more special?

Priest: It's something that you’re so prideful in. I was raised in the same neighborhood that he was born in. I have a family member that was his brother’s school teacher. We have so much more in common than we even knew before we met, which made the transition so much easier. That’s probably why we hit it off really easy. We already had so much in common.

We just wanted to do things our way, and that’s making it. We both have that same mentality. That’s probably why the partnership worked so well.

DN: Outside of the ring, you’re an avid weapons collector. What’s the most prized piece in your collection?

Priest: I have a couple of swords that are from early wars. I have so many cool weapons. My favorite weapon is the one I just got. They’re my new toy basically. The favorites change depending on the moment. Usually, some of my older weapons that are 50- to 100-years-old, I lean to those as my favorites. They’re the most important ones in my collection. They’re all martial arts-based weapons which is cool.

DN: You have a good amount of ink. What tattoo is most significant?

Priest: I don’t do the go in there and pick something off the wall. They’re all basically original pieces for me. For pain alone, it has to be my back piece. It’s the biggest piece that I have. It took over 30 hours.

I’ve always been a fan of the weird, dark, odd stuff. Every piece has something to do with something in my life or someone in my life, so they’re all pretty important.

DN: The Royal Rumble is full of surprises, but we’re entering it this year knowing that Johnny Knoxville will be a participant. What if Damian Priest looks up in the ring at the Rumble and sees the Jackass Forever star across from him?

Priest: You got to feel bad for the guy, right? (Laughing). I won’t because he chose to be in the match, but he probably should just eliminate himself at that point. I’ll say that.

I know he could take some pain. I was a big fan of the (Jackass) TV show and of all the films. I know the pain he could take. Being that he’s been doing this for a long time as far as taking that pain from his show, I don’t think he’s ready for this type of pain.

Priest: Sky’s the limit. This past year was the best year of my entire life, professionally and personally. I’m on cloud nine. Going with that mentality of ‘Well, I gotta do better tomorrow,’ this year, I’m looking to make it bigger.

So, let’s see where this could go by the end of the year.