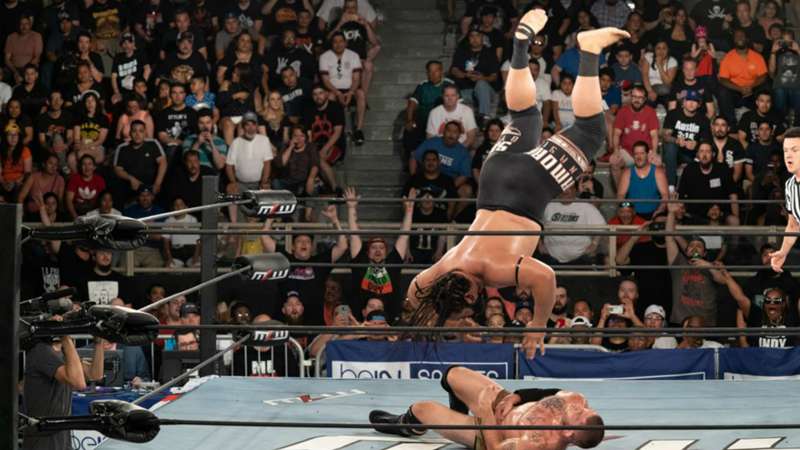 If it weren't for Court Bauer, there would be no Major League Wrestling. We get a look at how the promotion differs from AEW and WWE while holding traits that are reminiscent of other combat sports.

DAZN USA is known as the home of combat sports, and the streaming service has added professional wrestling to its portfolio with Major League Wrestling. The promotion features talent such as heavyweight champion Jacob Fatu, former UFC fighter Tom Lawlor and Alex Hammerstone.

The man behind leading the organization to new heights is MLW CEO Court Bauer. Initially, the New York native started MLW in 2002 and ran until 2004. Then in 2010, Bauer brought MLW back, but in a different form, as he began the MLW Radio Network, which has featured a variety of podcasts with Bruce Prichard, Tony Schiavone and will be anchored by the return of the popular Talk’n Shop podcast hosted by "Machine Gun" Karl Anderson, "the Big LG" Doc Gallows and Rocky Romero.

Bringing MLW back to a podcast format, followed by fan demand to bring back the famed promotion, led Bauer to revive the company in 2017.

Since then, MLW hasn't looked back. They had to hit the pause button for a moment due to COVID-19, but new episodes will be airing at the beginning of November on DAZN with exclusive content.

Bauer recently spoke with DAZN News on why he decided to bring MLW to DAZN, the challenges of COVID-19, what MLW is all about, and who the fans should keep their eye on when watching the product.

DAZN News: The wrestling world took notice when you recently announced that MLW would be airing on DAZN. There are a lot of other streaming platforms out there, but what was it about the DAZN that you were like,"You know what, this is the move we have to make and we have to make it right now?"

Court Bauer: For us, we look at our audience and where our audience is at today and where we're all going tomorrow as a society and in terms of consumer sports. To me, it's streaming. It's no longer the premise of streaming is the future. Streaming is the here and now. And to me, it was a 21st-century move. You go where the future is. Right now that's all about what DAZN is doing. So for us, that was like, a great place for us to go and present our future premium events, put our library on there. It just made a lot of sense. The content ecosystem of DAZN is so robust. The user interface is incredible. It checked off a lot of boxes just in terms of the fan experience. When you watch it, if you're not familiar with MLW and you find out about it while you're checking out a Canelo fight or a Bellator show. It's such an easy find.

We have a lot of former MMA fighters, a jiu-jitsu gold medalist, King Mo (Lawal,) who's dabbled in boxing a little, and of course in MMA. It felt like a great home for us. And for everything we have heard from our fans, it's been a great place to just binge on MLW. We have some cool stuff in the pipeline I can't talk about yet, but we're excited to be in the mix with DAZN on.

DN: COVID-19 has rocked the planet. MLW had to put a pause to the cause for a short time. I just saw recently you guys hired a COVID-19 compliance officer. You announced earlier this week that MLW will be returning and hold tapings with no fans in October with the episodes airing on DAZN at the beginning of November. Why did you put the company on hiatus and how are excited are you to be back in the saddle?

Court Bauer: First off, I’m thrilled that we are going to be back, holding tapings and providing exclusive content to DAZN. People kept asking when we were going to return. Our last show was in Mexico on March 13. Things happen so fast. I think that morning of our show, the NBA decided to temporarily go on hiatus. By that night and the final main event, we knew we were going to be going on hiatus. You don't know for how long. There's no way to really chart a course like this. But we knew would probably be shutting it down for some period of time until we got a sense of where everything was in the world.

We really wanted to operate with an abundance of caution for the health and wellness of our athletes, our crew and our staff. So we didn't rev it right back up. We wanted to be careful and wanted to take into account the latest developments for treatment, PPE, vaccines and anything and everything that would give us a better sense of comfort for our fans, athletes, and everyone involved.

As time has progressed and checking in with our chief medical advisor, Dr. Schwegler, we started to see some encouraging steps on the treatment as well as the testing and a lot of breakthroughs in the last — including a total breakthrough this week with an instant five-minute test that the FDA approved. The saliva direct test is really a big move. You're seeing treatment really get better. We have all these vaccines in the mix. We’ve talked with different organizations, our media team, our medical team, going down to Johns Hopkins Hospital to be part of a symposium on the virus and try to get as much information to see how other people have done it with the success they've had and things they would suggest, or doing differently.

Taking all that into account has been very helpful for us. That's put us on a track to say, "Okay, I think we can start to enter the next phase of this." Part of that for us was getting our staff certified training and preparation for that. In terms of the virus, while there's a whole process you go through to get certified training, a lot of it really is common sense stuff, but you want everyone equipped with the knowledge. Then, of course, bringing in someone in that and oversee this in the trenches. It's important to have that person really monitoring everything, and having everything set up and helping us prepare our crew or talent in advance of that with all the information, the guidelines, everything and then starting the testing process.

Bauer: Major League Wrestling is a sports centered league. I think there are wrestling leagues that are like a variety show, or a circus or over the top. For those wrestling leagues where it's like you're in on the joke. That's kind of silly. I think that's all great in a way that works for them.

But for us, we really try to approach this as a combat sports league. It’s just like you'd see something in MMA or boxing. But in addition to the fight, there's some weird s— that goes down. We're grounded in reality. Yet we have these unique twists and turns that we can play with that you maybe would see in other sports where we can control the outcome a bit better. That's kind of how I — as the creator of this league have — developed this.

It's very much grounded in the world of combat sports where strange things happen with these very unique characters.  But it's centered around different fighting disciplines. If you were a fan of the early UFCs, you see there's a little bit of that in the DNA. We like to try introducing style versus style fights. You might have a Mexican luchador who has a very different style where it's more of aerial combat, versus Tom Lawlor — a 10-year UFC veteran who can strike, grapple and tap you out. Then you have the heavy hard-hitting style of Japanese wrestlers. It's a convergence of styles and larger than life personalities but very much centered in the real world. We want that real edge to the product.

DN: MLW has a very good roster that includes Alex Hammerstone, who just signed a national endorsement with JBL, Tom Lawlor, Selena De La Renta. But to me, you got the guy who is quite arguably the future of pro wrestling with Jacob Fatu. How great is Jacob Fatu?

Bauer: He’s a freak. I mean he’s a guy who could have been in the NFL and been a huge pro ball player. I've worked with his uncle Eddie Fatu, also known as Umaga or FP. They are very similar. Jacob’s just an incredible freak in terms of his versatility as an athlete. He has a vertical that's ridiculous. He has natural raw power and you can see it in his wrestling. It's so dynamic. It's so different. He has all these things. It's how I built MLW.

We approach it with a Moneyball type of philosophy. I try to identify undervalued or undiscovered talent, and then put them in our system, and, hopefully, they thrive. In fact, Jacob’s a guy that's been around and just for whatever reason, went undiscovered, or undervalued. And we just gave him the opportunity and the platform to do what he does. And it's a no brainer. The same with Alex Hammerstone. These are guys that have been long in the mix. He was on the west coast and we have incredible franchise players.

Bauer: I think some of the projects we're talking with DAZN about with doing tentpoles that are going to be high impact, high awareness moments. I think those are going to be something that’s going to really drive the audience. It's going to drive our athletes. Building out these tentpoles, I think that's important. You get to sit there with a pencil with blank pages and say, "Okay, let's just have fun". What are the biggest matches we can make? Now we can put it on something like this on DAZN, which is really exciting.