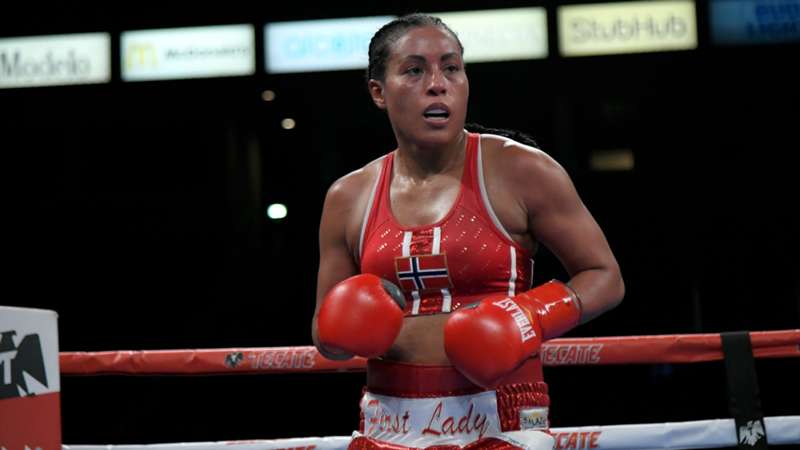 Cecilia Brækhus will defend her title against Jessica McCaskill in Saturday's main event, and the 38-year-old says that she is deserving of that honor to push women's boxing further into the mainstream.

When you are one of seven boxers in history to hold all four major world titles in a division simultaneously, respect needs to be put on your name. And despite Cecilia Brækhus being the undefeated and undisputed women's welterweight champion, she is still looking to command the respect in the boxing world that she deserves.

The Norwegian will make her long-awaited return to the ring on Saturday, Aug. 15, when she defends her five world titles against Jessica McCaskill in the main event that takes place on the streets of Tulsa, Okla.

A victory will put her in line to face the winner of the following week’s showdown between undefeated Katie Taylor and Delfine Persoon in what is been crafted as a mini-tournament to determine who the best pound-for-pound women’s boxer is.

“It’s great and we deserve it,” Brækhus tells DAZN News. "I think our fight being the main event — and Taylor-Persoon the next weekend — is pushing women’s boxing forward. You see so many talented women coming up and they see what they can do in this sport, what they can achieve and what is up there for them to capture.”

A professional for over 13 years, Brækhus has traveled the world and collected world titles along the way. She has gone undefeated in 36 fights and has never heard a scorecard read in favor of her opponent. She’s about as dominant as they come in women’s boxing but, unfortunately, she’s spent much of her career out of the spotlight because women’s boxing was being ignored rather than embraced. Brækhus has persevered through the dark era of women’s boxing and became the undisputed welterweight champion. Now it’s time for the world to see what the hype is about and if Brækhus should be the one leading the charge.

“There is so much talent in women’s boxing it is ridiculous,” she says. “We are entertaining. And coming from a place where women’s boxing just wasn’t in a very good place. I’m seeing everything happening for us now and it is pretty awesome.

An impressive performance would certainly go a long way in getting women’s boxing more of the spotlight while also setting her up for what will certainly be a huge fight with the winner of Taylor vs. Persoon.

Perhaps more important than that is the fact that a successful title defense will break the legendary Joe Louis’ record of 25 consecutive title defenses. It’s something that she doesn’t want to focus on but is keenly aware of the significance.

“I don’t want anything to cloud my focus and that’s something that can put you off your game if you think about it too much,” she says. “But I am using it as motivation. I just don’t want it to overwhelm or choke me.”

Believe it or not, women’s boxing still has its detractors, and there will certainly be a group who try to downplay the accomplishment. But the 38-year-old has been in this game too long and has overcome so much to let a minority of boxing fans take away her accomplishments.

“I don’t have anything to say to them. I can’t use my time to stroke their fragile egos. That’s not my job or my business. My business is boxing.”